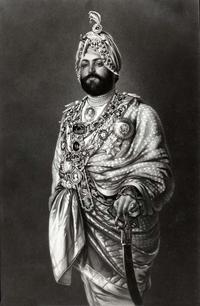 This knowledge exchange project aims to examine the religious identity of Maharajah Duleep Singh, the last ruler of the Sikh Empire. In 1853, aged 14, the exiled and deposed Duleep Singh became the first South Asian king to convert to Christianity. In later life, Duleep re-embraced his childhood Sikh faith, alongside rebelling against the British government to recapture his lost kingdom. His religious persona was thus connected to politics throughout his lifetime and even up to the present day: particularly amongst British Sikhs, who have increasingly memorialised the Maharajah as the country's first 'Sikh settler', despite his prominent Christian identity.

However, despite intense biographical and popular interest in Duleep Singh's religious life, there has yet to be a formal academic study of the subject. This project will be the first such endeavour. The Ancient House Museum was founded by the Maharajah's second son, Prince Frederick Duleep Singh. A key part of its interpretation centres around the story of the Duleep Singhs' connection to Norfolk and Suffolk. Funding is sought to enable Dr Atwal and the Ancient House team to collaborate in studying two Bibles previously owned by the Maharajah; together with further archival material in local and national collections; to analyse his religious experiences, activities and image.

The project's findings will simultaneously enrich academic and community knowledge. A key output will be the installation of a new permanent display at Ancient House, centred on the Bible gifted to Duleep Singh on his baptism, and incorporating new interpretation based on the team's research. These findings will also underpin Dr Atwal's second book: a biography on the Maharajah's life, politics and status in imperial Britain.