A Note from Mike and Evan, Race and Resistance's New Co-Directors

I’m Mike, a third year DPhil working on decolonisation in the British and French Caribbean during the interwar years. I arrived in Oxford as an undergraduate in 2011 and have been involved in race equality initiatives at the university ever since. Taking over the leadership of Race and Resistance feels like a natural next step.

And I’m Evan, a second year DPhil studying ethnicity and U.S. Government policy in the making of the mass incarceration of Japanese Americans during the Second World War. I’m interested in applying this historical study to further our understandings of the contemporary politics of ethnicity, racial profiling, and national security in the post-9/11 “War on Terror.” I’ve been a student at Oxford and a member of Race and Resistance since 2015.

As historians, we know that we’re only a small part of a much longer story at Oxford. Most immediately, of course, we’re indebted to our predecessor, Tessa Roynon, and to those who established Race and Resistance in 2013. More broadly, however, we’re keen to acknowledge that anti-racism and activism have a long and distinguished history at the university. When we think about Oxford, we think about the Joint Action Committee Against Racial Intolerance, which mobilised thousands of students in the late 1950s and early 1960s around issues of race in Oxford and overseas; and we think about Stuart Hall, whose house on Richmond Road became an intellectual hub for students from the colonies, and for the founding members of the Universities and Left Review.

We want to offer another such space: a home in which academia and activism can come together to engage with questions of race and resistance in the present day.

As part of The Oxford Research Centre in the Humanities (TORCH), and members of the international academic community, we take an interdisciplinary approach to the study of race and resistance on a global scale. We work closely with our affiliated TORCH networks on ethnicity, gender, sexuality, and more, in addition to hosting speakers and panellists from across the globe. Engaging with Oxford as both an academic institution and a cosmopolitan city, we strive to maintain an atmosphere of inclusion and intellectual exchange. We invite everyone - student, faculty, community, or visitor, with an interest in our programme or events - to join us and participate in our Friday seminars and discussion sessions.

We hope to see you there!

--------
Race and Resistance is always looking for new contributors to our blog.

If you would like to write a piece, or if you have a response to a blog entry you have read here, please e-mail the blog editor, Annie Castro, at anne.castro@mod-langs.ox.ac.uk. 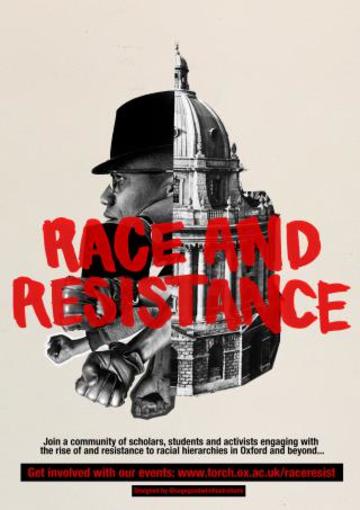