The fields of life-writing and celebrity studies have separately gained traction in academia in recent years, but have seldom been explored together. With help from the Oxford Centre for Life-Writing, the Oxford Research Centre for the Humanities and King’s College London, we organized a one-day conference exploring the intersections between these two fields. The conference, entitled ‘After-Image: Life-writing & Celebrity’, was held in Oxford on 19 September 2015, and organized by Oline Eaton (PhD candidate, King’s College London) and Nanette O’Brien (DPhil candidate, Wolfson College, Oxford).

As essential preparation for the conference, we spent a morning walking the hallowed halls of Madame Tussauds wax museum. We were initially disturbed by the uncanny representations of contemporary celebrities like Russell Brand and Kim Kardashian. We laughed in disbelief at how badly Emma Watson, Colin Firth, and George Clooney were captured. Among the bodies in the rooms of figures past and present, the evanescent and emotional quality of celebrity became a material reality for us.

We were also amazed by how hardy a material wax is and to see that Tussaud’s original 18th century figures of Voltaire and the French royal family survive today. Certain life stories endure like that, and life-writing plays a key role in their preservation. And yet, the connection between celebrity and life-writing has been under-explored. In celebrity studies, celebrities are more often considered as texts. And in life-writing the phenomenon of celebrity is often portrayed as an event rather than as an on-going part of an individual’s life-experience. Our aim in organizing ‘After-Image’ was to begin a dialogue exploring the deep connections between these two subjects, and stimulate discussion of them across a range of approaches, periods, and genres.

As Richard Dyer has suggested, celebrities become a part of ‘the coinage of everyday speech’. Historically, writing has been the primary means of this transfer, and it is through stories from the celebrity’s life that the celebrity becomes familiar to us. Below, we’ve loosely summarized and reflected on the papers from the conference. We hope this is just the beginning of the critical conversations about the intersection of life-writing and celebrity.

Celebrated and/or Reviled: Politics and Power

In his paper on Charles I, Benjamin Woolley suggested celebrity is a useful lens for thinking about biography, a genre that sits—sometimes quite uncomfortably— at the intersection of theory and life. Emily Bowles elaborated upon these tensions in her analysis of the changing rhetorical concept of ‘the Dickensian’, looking at how the name of Charles Dickens became a part of everyday speech and the various meanings his name has assumed in the 20th and 21st centuries. As both papers reveal, celebrities played an integral role in the everyday life of earlier centuries, exerting a power that inspired the way people thought and which moved them to act—whether by writing letters of admiration or founding a society in a celebrity’s name.

In a panel that examined the surface aesthetics of intimacy, clothing, image and self-fashioning, the speakers explored the effects of 20th century technologies—including photography, blogging and social media forms—on celebrity image. Christine Fouirnaies examined the authenticity of Gertrude Stein’s self-presentation through photographs, sculpture and paintings, comparing the ‘weightiness’ of the modernist celebrity with the concept of Stein as ‘a consumable avant-gardist’. Rod Rosenquist also explored the relationship between images of modernist writers, asking whether we should interpret their self-presentation in various states of undress as an authorial posture of self-fashioning. These themes intersected in Nicola Sayers’ talk about the celebrity image of contemporary style blogger Tavi Gevinson. Across the panel, it became clear that intimacy, imagination, image and vulnerability are significant aspects of contemporary celebrity and our idea of the normal.

Self-fashioning was a crucial theme for the Sitwells (Edith, Osbert and Sacheverell), explored by Deborah Longworth, as a literary family defined by fantasy, invention, decoration and a hatred of doctrine. This anti-doctrinal feeling resurfaced in Nanette O’Brien’s paper, which considered foreshadowed doom and neuroses in Lytton Strachey’s Eminent Victorians. Following from this, focusing on ‘the Cult of Iris Murdoch’, Lucy Bolton explored the ways in which famous authors’ voices are appropriated in contemporary representations from biopics to Pinterest pages. The panel made a compelling case overall for the importance of self-fashioning to authors and how later generations appropriate these images and narratives.

This panel explored the new heroic icons being projected in 20th century life and the role of the mass media in this projection. Tom Ellis’ paper considered Life magazine’s portrayals of Russian cosmonauts, Max Jones looked at accounts of Lytton Strachey’s Eminent Victorians, and Oline Eaton contextualized Norman Mailer’s 1973 depiction of Marilyn Monroe. Despite what might appear to be a topical disconnect between the papers, all three were engaged in interrogations of the contemporary culture’s impact on the stories we tell and each examined how this shapes the telling. It’s a preoccupation that suggests the level of manufacture involved in celebrity stories but also the cultural usefulness of such tales, particularly in the 20th century and at the national level.

Roundtable: ‘Historical Re-evaluations of Celebrity in the 18th and 19th Centuries’

Sandra Mayer and Ruth Scobie chaired a lively roundtable on the historical origins of celebrity. The featured speakers were Faramerz Dabhoiwala, Jessica Goodman, Tom Mole, and Simon Morgan and they engaged in spirited debate about the definition of celebrity and its date of origin. Specifically, the roundtable considered what differentiates ‘fame’ from ‘celebrity’, and at what point did this differentiation begin. Ultimately, there wasn’t agreement on a specific starting date, but there was a consensus that the modern concept of ‘celebrity’ and a ‘culture of celebrity’ could not have existed prior to the rise of print media. Certain elements of celebrity were present in prior centuries, but they did not coalesce until the 18th century, as actresses and public figures increasingly became known for their personalities rather than the positions they held.

Andrew O’Hagan’s mid-day keynote, ‘Stealing Lives: Does Your Story Belong to You’, weighed some of the ethical questions surrounding writing the lives of famous people either as fiction or in profile. As O’Hagan noted, ‘life-writing starts from the assumption that lives are free to write about’. But a life being ‘free’ to write about is a difficult concept to quantify when it effects the living family and possibly also a living subject. Ultimately, however, O’Hagan emphasized that because the boundaries of life-writing and fiction are porous, the best life-writing depends on a kind of novelistic brio.

Rather than deferring to other people’s demands, O’Hagan argued, the writer must write the story that presents itself. As a coda, O’Hagan reflected that the writer pays a price for the lives he steals. Life-writers don’t just steal stories from other people; they steal time, energy and life from themselves by writing: the writing diminishes the writer over time.

In her evening keynote, entitled ‘Ghosting’, Sarah Churchwell suggested that the two fields are so connected that celebrity life-writing is a tautology. Because well-knownness is precondition of almost all biography, Churchwell persuasively argued, all life-writing is, by necessity, about celebrities. Churchwell sounded a call to arms for the restoration of pleasure to academic criticism, insisting on the necessity for creating different acts of homage and restoring the open relationship between biography and poetics as we think critically through pleasure.

Churchwell likened the biographer to a ghost-writer hunting for details in the archives. And in an example from her own research on F. Scott and Zelda Fitzgerald, Churchwell introduced us to the term pentimento: ‘a sign or trace of alteration in a literary or artistic work’. Churchwell walked us through a scenario in her own work in which a discovery of a ghostly trace in a notebook dramatically changed the story. The search for truth in the archives isn’t always going to pay off like this but, as Churchwell argued, biographical enterprise is about catching the ghosts of history.

The ‘After-Image’ conference was a part of our on-going collaboration and seminar series, Life-Writers of London, held at KCL. The conversations begun at the conference, particularly regarding the lenses of image, story-telling, mythology and legend, have continued in our ‘Season of Celebrity’. This term has featured talks by Deborah Jermyn (Roehampton), Tom F. Wright (Sussex), and our final seminar is with Josh Cohen (Goldsmiths) on 7 December. For more information, please join the Life-Writers of London Facebook Group. 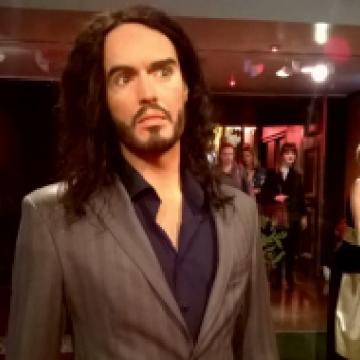