An excerpt from Peter Davidson’s forthcoming book, The Lighted Window

For our first Environmental Humanities blog, an excerpt from Peter Davidson’s forthcoming book, The Lighted Window, with very kind permission from the author:

It is dark now, September nightfall has surprised me as I write, and my desk lamp is the only light. There are no voices or footfalls in the narrow street under the bulwark of the city wall outside, deep in the quiet vacation. It is time to stop writing now, to tidy up, and walk home. I look round my pleasant, slightly subterranean office. My grandfather’s desk by the window, armchair by the fireplace, old plasterwork on the beams, Regency sofa. I switch off the desk lamp and go out and through the garden door with its smart 1930s panel of diamond-point-engraved glass. The sky above the garden shows dry, thinning cloud and filtered moonlight with many, many stars – a fair late-summer evening, a wonderfully fair evening.

I go out by the back gate into Rose Place, closing it firmly behind me, listening for the click of the automatic latch. Sweet, mild air with just a filament of wind, relief after a disordered summer spoiled by airless droughts, uncontrolled downpours. A stone wall lit by a tall lamp-post, the crack of an invisible squash ball striking the other side of the wall. A first-floor window in the student house on the right projecting four panes of slanted yellow light onto the gable opposite. On along the lane, walking on tarmac laid over the culverted ‘hidden stream,’ along the well-trodden path between Campion Hall and the Catholic Chaplaincy whose leaded windows shine at the end of the dark lane, a lit ship at anchor at the end of a pier.

The café on the ground floor is dark except for the blue ghost-light of the refrigerated display, but the Tudor windows of the Old Palace above are bright, and the deep cut plaster ceiling of the big room on the first floor is as crisp and fantastical as when it was new, four centuries ago. There are flowering plants on the windowsills, trails of climbing jasmine silhouetted against the lattices. The big lamp beside the desk is on, and the far corner of the room is warm with yellow light. I can’t see him but my friend the chaplain must be sitting where Monsignor Knox once sat writing apologetics and detective stories in the between-time of the twenties and thirties. Time passes: the summer hurries on to its end, then the turning leaves and Michaelmas Term, then another dark, too-mild winter. Our own slice of time is only ever betwixt and between.

I cross St Aldate’s towards the great trees in Christ Church grounds and turn south past the Faculty of Music. Dry pine cones crunch underfoot. I walk between the Police Station and the deserted bus stop, and then into the broadening street, indifferent modern houses immediately onto the pavement to the left – one open window and the delicate and beautiful scents of turmeric, fenugreek and cinnamon quills roasting together float for a few seconds on the mild air.

The weighty, cast-iron railings of the Head of the River are to my left: the ground floor is illuminated, darkness upstairs. There are few people sitting out on the terraces so late in the day, so late in the summer. In August, the tables would be thronged, with laughter and music, and the punts and rowing boats coming and going to their little quay between the pub and the backdoor footbridge to the Meadows.

I am on Folly Bridge now and looking downriver towards the boathouses. Stars flicker in the great trees drowsing by the water. Their lights sinking in the branches, glimmering in the river, mingling with the lit ripples from the windows of the pub, from a bicycle lamp far away on the towpath. It is perfect in its own kind – the trees overhanging their green reflections, the lights in the rooms of the Victorian boathouse, in the attic windows, in the oriels overhanging the stream, all trailing their threads of light into the mirroring, folding, unstill darkness below them. The moon rides clear of the cloud-wisps and trees, and the Thames glimmers on both sides of the bridge.

The moving Moon went up the sky,

And nowhere did abide :

Softly she was going up

And a star or two beside—

I cross over towards the gothick-grotto tower on Folly Island with its brick crenellations and fireback-flat statues in shallow niches. Nobody about, so I linger on the little bouncing footbridge over the pool by the gimcrack tower, with the stars and the lights from the Folly and the riverbank all reflected in the still water by the bridge: a full sky of late summer stars doubled in the black-blue, softly-moving water of the pool. How beautiful all this is and how it draws things together.

Lights in the water like the ‘drowned towns off England’ at the end of Homage to Mistress Bradstreet: their lights sunk below the river-drift of the old world. I am thinking back four decades to unforgotten lights seen across a dark river. Of my lodgings in Wentworth House, of my attic window overlooking the Cam and the water-reflected lights of the cul-de-sac pub and its little beer garden on the other bank. These were the only lights which I could see, shining between the dark warehouses and the sparse streetlamps on the common. The beer garden was almost always empty, and the one time I went there for a drink it was dull and ordinary, but it seemed a kind of paradise garden seen across the river, and it seems so still in memory.

Light seen across water at night so often evokes longing for a paradise just out of reach. Reflected moonlight and starlight intensify it by bringing the sky down into the estranging river. Coleridge’s famous gloss on the Ancient Mariner hides the image of a great house lit for a festival within its expression of grief in isolation, in separation from the sky and its starry lords-:

he yearneth to­wards the journeying Moon, and the stars that still sojourn, yet still move onward; and everywhere the blue sky be­longs to them, and is their appoin­ted rest, and their native country and their own natural homes, which they enter un­an­nounced, as lords that are certainly ex­pec­ted and yet there is a silent joy at their arrival.[1]

This has a response in Gerard Manley Hopkins’s ‘the Starlight night’, which positions the gazer at the lighted windows of the night sky – ‘the bright boroughs, the circle-citadels’ – as one who is watchful for the smallest showings-forth of the glories of paradise in glimmering light in dew, in the flickering of leaves or pollen, the glistening of feathers. By the end of the intricate sonnet, the starry sky has become a barn filled with the sheaves of God’s harvest and the stars themselves are the brilliant rents through which the glory of the court of heaven shines on the attentive watcher on earth:

This piece-bright paling shuts the spouse

Christ home, Christ and his mother and all his hallows.[2]

Like Seamus Heaney’s walker halted by the hawthorn hedge who is scrutinised by the lantern-eyes of the berries and is not found wanting by its ‘small light for small people,’ its ‘lantern seeking one just man,’[3] Hopkins’s gazer on the sky is blessed with the sight of the triumphal homecoming of the court of heaven, ‘which they enter unannounced, as lords that are certainly expected.’ And the stars burn on in the water below me, and the lamp in the tower window has its double in the river.

An extraordinary visual rhyme for all of this is found in Goya’s small nocturne showing the Bohemian Saint John of Nepomuk, martyred by an unjust king, and his corpse thrown into the Vltava river flowing through Prague. The first impression of the picture is inevitably of sheer depth of colour: the moonlit sky is rendered in profound azure and ultramarine. High moonlight falls on the humble, almost melancholy figure of the saint, blanching the white linen of his vestments, and the tassel on his biretta. The young man is cradling a crucifix in his arms, and the fall of the moonlight animates the carved figure, on which the saint gazes to the exclusion of everything else, stillness and devotion without duration. He is standing in an imagined place, on an imagined moonlit night, but he is not standing in time. On the far bank of the shadowy river is a great round tower – two minute flicks of yellow pigment articulating a lit window and a brazier on the ramparts. All worldly power is there and the saint is outside in the moonlight, alone with the crucifix. The  moonlight plays round the edges of distant trees, catches a bright cloud on the horizon. But there is a stranger light in the picture, light from the grey-blue waters of the river itself where the saint’s body floats downstream in a coracle of miraculous stars. And the unearthly light in the water obliterates the reflection of the tower window, outlasts earthly power, outshines the moonlight and blends the sky with the earth.

I walk on along the path by the river. The moon has flooded the sky above me and I can hear the water murmur as it divides its flow at the island. Two hundred paces from our house. It will all come out right in the end: the stars go home and so do we. 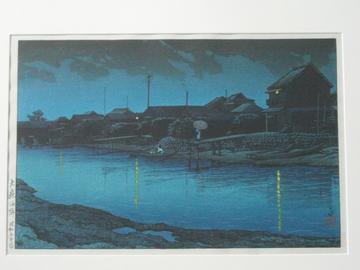