A Remote Internship with the National Trust Partnership

Originally intended to mark the upcoming census in 2021, recent events have added newfound urgency to the National Trust’s exploration of the theme of ‘Home’. Many of us now find ourselves living and working within a single domestic space, changing our relationship to the home dramatically. It was within this context that I, and five other students, undertook a curatorial research micro-internship facilitated by the National Trust Partnership at the University of Oxford. Under the enthusiastic guidance and expertise of the Partnership Lead, Alice Purkiss, and Support Officer, Hanna Smyth, we were tasked with uncovering the little-known histories of National Trust properties by taking imaginative responses to the idea of ‘Home’.

My chosen property, Knightshayes, is a grand nineteenth-century Neo-Gothic house in Devon with extensive grounds that include a walled kitchen garden, formal terraces, parkland, and woods. Reflecting on the theme, I began my research thinking about how class and gender might shape different individuals’ relationship with the home. Public interest is increasingly directed to the lives of the domestic staff whose labour facilitated the running of country homes, like that at Knightshayes – something we might term the ‘Downtown Abbey’ effect. Thinking about the extensive gardens and parkland at the property, I decided I wanted to direct my attention beyond the four walls of the main house to think about the other kinds of homes that people living and working at Knightshayes might have made on the estate.

Working remotely due to the Coronavirus pandemic, rather than using the library collections at Oxford that I have become so dependent on as a graduate student, I had to seek out digital resources. Examining the available censuses for Knightshayes using genealogy websites, I began looking at the households located on the estate. Noticing the large number of gardeners listed on the censuses, I decided to focus on their experiences living and working there between 1881 and 1920.

One of my key findings was that many gardeners in the early stages of their careers actually lived within the gardens themselves. They were housed in rudimentary dwellings known as bothies. With the Knightshayes bothy still standing today, it seemed a particularly fitting avenue to pursue.

I learnt that between 1881 and 1911, the three rooms of the bothy would have accommodated three or four men along with a host of gardening equipment and a small kitchen. However, while the censuses provided me with the bare facts of the household – the names of the occupants, their occupations, ages, and birthplaces – it could not give an impression of what it might have been like for the men who had to live together in these cramped conditions.

Motivated to find out more about these men’s particular experiences, I scoured the internet for digitised gardening journals and trade newspapers published at the turn of the twentieth century. From these, I learnt that the young gardeners lived in the gardens so that they were close to the boilers that heated the glasshouses, commonplace on large estates. The complex system of boilers and pipes had to be monitored every four hours by the bothy gardeners – even throughout the night – meaning that their home lives were inseparable from their work. Through the demanding toil of these gardeners, the glasshouses were used to grow an impressive range of produce usually incompatible with the cold British climate. At Knightshayes this included grapes, peaches, figs, melons, and even bananas.

While the produce grown in the glasshouse was primarily enjoyed by the main house or sold at the local market in Tiverton, it appears that, occasionally, the gardeners were able to quite literally enjoy the fruits of their labour. I discovered a wonderful piece in a journal written by Arthur Smith, the garden foreman at Knightshayes 1891, that shared his delight at cutting a sizeable bunch of bananas that had been growing inside one of the glasshouses. Weighing 130s lbs and with 186 fruits on it, he tells his readers that the bunch provided staff with a steady supply of bananas which they had been enjoying for dessert! I found personal insights like this particularly compelling. They allowed me to a build a picture of the individuals who made their homes working on the estate, rather than simply recounting the lives of the gardeners on an abstracted level.

Towards the end of the week, while I was writing a report to share my findings with the curators at the National Trust (who would have co-supervised the project had they not been on furlough), I kept thinking about how intimately the lives of these gardeners were intertwined with their work. I wondered what we really mean when we speak of home. To revive an old cliché, what makes a house a home? Does this transformation relate to an ideological and spatial separation of public and private activities? Or a separation of work and rest? Would the gardeners working at Knightshayes have considered the bothy, a form of professional accommodation, a home?

While the research I collected during the week-long internship cannot fully answer these questions, it provided a fascinating insight into the homes of the gardeners at Knightshayes and gave me valuable experience undertaking curatorial research and developing skills that I hope to carry forward into a career in the heritage sector.

Kitty Gurnos-Davies is a PhD candidate in English at the University of Oxford. She works on the interrelationships between women, agency, and the materiality of the stage facilitated by an AHRC-funded Collaborative Doctoral Award (CDA) in partnership with The Theatre Chipping Norton and the Royal & Derngate theatre. Her project draws upon her experience working as a costume and wig professional in London. Kitty is a contributor to the Trusted Source project with the National Trust Partnership, and tweets at @kitty_g_d.

Find out more about the National Trust Partnership here.

Find out more about the TORCH Heritage Programme here. 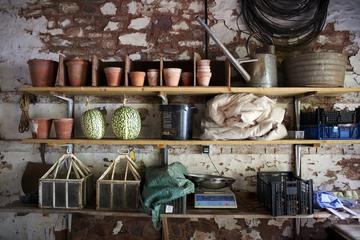