Conversations with the National Railway Museum

The TORCH Heritage Programme is pleased to have supported the doctoral research of Lisa Hirst on 'Britain’s Pioneering Railway Hotels: a social and architectural history, 1839-1854'. Lisa was awarded a TORCH Heritage Seed Fund Conversations grant to visit the National Railway Museum (NRM) in York, and study its extensive collection of hotel-related objects, in collaboration with the museum's curators, staff-members and researchers.

The topic of my DPhil in social and architectural history is Britain’s pioneering railway hotels in the early Victorian era. My research focuses on the time frame 1839-1854; the start date marks the opening of the world's first railway-owned hotel at London Euston, while the end date denotes the launch of London's next railway hotel, the Great Western at Paddington, regarded as the prototype for 'the modern gigantic hotel'. Nevertheless, during these 15 years, 30 principal railway hotels were sited in provincial towns and cities, with many of these understudied buildings at the fore of innovation and design. The rapidity of change during this period demonstrates how architecture was striving to keep pace with the progress of the railways. Indeed, renowned architectural historian Sir Nikolaus Pevsner, in his history of building types, noted that ‘the early railway hotels are the most interesting hotels of the early [eighteen] forties in England’.

My research seeks to brings fresh understanding to the emergence of this new form of building which would become a dominant feature of Victorian Britain’s major towns and cities and emblem of the new railway age.

I am self-funding which means I am not attached to a Collaborative Doctoral Partnership with a museum or heritage agency, and I have sometimes felt hampered by the lack of hands-on experience and wider contexts this could provide. This is not least because my background and training are in Design History, which I studied jointly at the Victoria and Albert Museum and Royal College of Art, so, it has always felt completely natural that the starting point for historical enquiry is the study of objects, particularly those in a museum.

To my delight, I received a TORCH Heritage Seed Fund Conversations grant which enabled me to visit the National Railway Museum (NRM) in York, which has an extensive collection of hotel-related objects. I was able to meet Senior Curator, Ed Bartholomew, and Research Fellow, Oliver Betts as well as other staff members, and discuss how I might draw upon their collections and how my research might feed into the work of the Museum, which is keen to broaden the interpretation of its displays. At the end of March this year I returned to York to attend an Institute of Railway Studies seminar, based at the Museum, and to meet again with my contacts.

It was on the first of these visits that I came across a rare Victorian board game that has opened up new ways of thinking about my topic and Victorian attitudes towards the early railways. Wallis’s Locomotive Game of Railroad Adventures, c1840, depicts trains, carriages, stations and hazards of early railway travel. A player is more likely to be rewarded if they land on a square with a station building. The board game has made me consider how station buildings – and railway hotels – may be regarded as places of reliability and refuge amidst the incumbent anxieties of travelling by railway. The following tells you a little more. 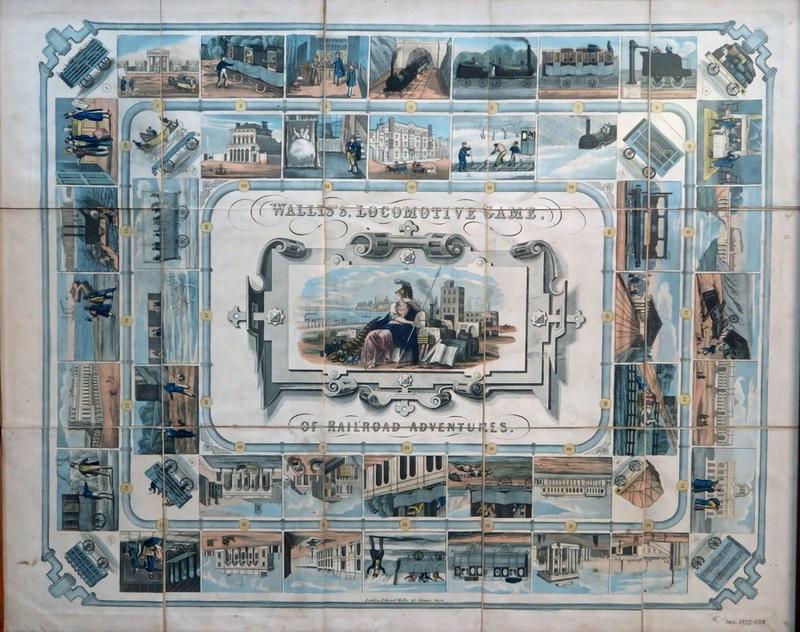 The game was produced by Edward Wallis of Skinner Street London, one of the most prolific board game publishers of the time. In fact, from the late Georgian era board games were regarded as respectable educational and instructional devices for children. The purpose of this game, then, was to instruct about the conveniences and inconveniences of this new form of travel.

The game is formed of a hand-coloured lithograph 24in x 19in, which is mounted on linen, and folds like a map into sections with a hardcover that ties. It consists of 48 numbered views, or squares, in two concentric rectangles leading to a central panel, numbered 49. There is a separate book of rules.

The squares incorporate a series of forfeits and rewards. For example, one of the biggest forfeits comes if you land on Square 12.  The instruction is:

OFF THE RAILS – Be thankful that you were not killed; but you must forfeit half of your counters to the pool, and begin the game again.

However, if you land on Square 32, the instruction is: 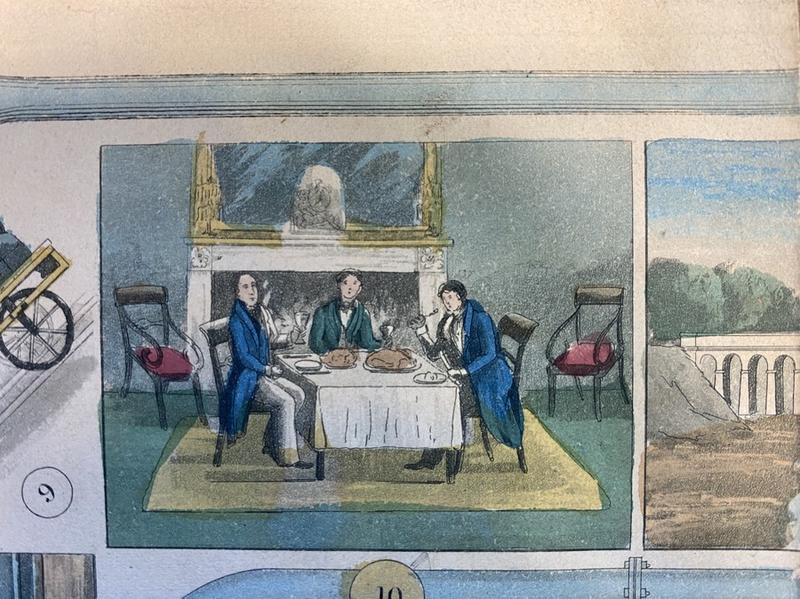 Square 10: The Queen’s Hotel, Birmingham (©The Board of Trustees of the Science Museum)

For my research square 10 is of particular significance:

QUEEN’S HOTEL, BIRMINGHAM – Pay three for your dinner, and I wish you good appetite.

This square depicts the interior of the Queen’s Hotel at Birmingham, one of the world’s first railway-owned hotels. It was established in 1839 when the London & Birmingham Railway converted its Birmingham terminus building, originally intended as offices, into hotel accommodation. The exterior of this building, Philip Hardwick’s Ionic counterpart to the now lost Doric Arch at Euston Station, is also depicted (No. 17).

The square of the interior depicts three men, wearing dress coats, tucking into a hearty meal. They are in convivial surroundings; the table is plentiful with food, there’s a roaring fire and ornate furniture including a gilt mirror, domed clock and comfortable armchairs. Despite the forfeit to pay for the meal, it’s the only square on the board that shows people relaxing and enjoying themselves. This interior scene of the Queen’s Hotel shows the hotel as a welcoming place of refuge and hospitality – for the middle-class travellers at least – amongst the incumbent hazards and risks of railway travel.

Wallis’s Game of Locomotive Adventures has acted as a launchpad to explore these ideas more fully. For example, it led me to think about the writing of Wolfgang Schivelbusch and his seminal work The Railway Journey: the industrialization of time and space in the nineteenth century first published in 1977.  For Schivelbusch, in these early stages, the stone-built façade of the station building acted as a gateway connecting two fundamentally different realms: the recognisable city on one side to which these buildings belong; and the new industrialised space of the railway on the other. This duality strikes a chord with the boardgame where architecture represents something more permanent and reliable than the transitory and perilous events that take place on the railway tracks. Indeed, the building at Birmingham was designed to be a monumental classical gateway symbolising the new railway era.

The output from the study of this particular museum object is that work based on the board game has been accepted for a presentation at the graduate forum for the Society of Architectural Historians of Great Britain (SAHGB). It will also form the basis of a chapter, exploring anxiety, reassurance and the railways, of my DPhil thesis.

The outcome is that I have established a good working relationship with the NRM and I intend to work more closely with their hotel collection on a placement (this was scheduled for this summer). Involvement has certainly widened my professional horizons.

What is exciting, for me, is the exchange of knowledge and ideas between the world of academic research and more object-based study of museum practice. I think it is here, at this nexus, that we can gain fresh understanding and add to existing scholarly conversations.

Lisa Hirst is studying for a DPhil in Social and Architectural History at the University of Oxford under the supervision of Rev. Prof. William Whyte. She is author of a forthcoming article on the early architectural development of the Queen’s Hotel, Birmingham. She has an MA in Design History from the V&A/RCA on which she has tutored at postgraduate level. From 2015 to 2019, she was a Trustee of the Society of Architectural Historians of Great Britain (SAHGB). She is currently a Trustee of the Mausolea & Monuments Trust (MMT).