The cultural theorist and literary critic Yuri Lotman (1922-1993) never wrote about Constantine Cavafy (1863-1933), though it is likely that he read him in translation, given the poet’s popularity in Russian literary circles of the 1970s. Despite Lotman’s lack of critical engagement with Cavafy, there are certain striking parallels between the works of the two writers, parallels which can help to illuminate the thinking of both individuals. In the text below, I will bridge the two thinkers via a discussion of Lotman’s idea of the semiosphere, which he developed towards the end of his life, and one of Cavafy’s later poems, ‘Το 31 π.Χ. στην Αλεξάνδρεια’ (‘31 B.C. in Alexandria’). Though it is somewhat unusual to compare a theoretical model with a poem, such an approach allows us to explore similarities between cultural criticism and fictional literature as well as the underlying thought processes of the respective writers.

Yuri Lotman was born in Petrograd (the former name of St Petersburg). In 1940 he was drafted into the Soviet army, where he spent 6 years. He graduated from university in 1950 and, following some difficulty in finding employment – Lotman was born into a Jewish family, a dangerous fact in late 1940s and early 1950s Soviet Russia – he settled in Tartu, a town in south-eastern Estonia. He would subsequently gain a position at Tartu University where he worked until his death; Tartu was a city on the edge of the Soviet Empire. Lotman was a key member of the Moscow-Tartu school of semiotics which was active between the 1950s and 1980s. A writer living in the periphery, an outcast in several respects, a single-city resident, Lotman’s biography shares several uncanny similarities with that of Cavafy.

In one of his later pieces, an essay from 1984 called ‘О семиосфере’ (‘On the semiosphere’), Lotman develops his ideas on how cultures are organized and function. In this text, Lotman outlines the features of the semiosphere, a ‘semiotic space, outside of which semiosis itself cannot exist’[1] – semiosis designating any activity or process that uses signs. The semiosphere is ‘a specific sphere, possessing signs, which are assigned to the enclosed space. Only within such a space is it possible for communicative processes and the creation of new information to be realised.’[2]  Lotman’s approach here is to work from the macro level of culture to the specific level of the cultural text. As he puts it, ‘by sticking together individual steaks, we don’t obtain a calf, but by cutting up a calf, we may obtain steaks, - in summarizing separate semiotic acts, we don’t obtain a semiotic universe. On the contrary, only the existence of such a universe – the semiosphere – makes the specific signatory act real.’[3]

The semiosphere is characterised by several traits. Firstly, it is homogenous and this allows it to differentiate itself from other semiospheres and non-semiospheric spaces. Secondly, each semiosphere has a boundary which acts as a membrane. The boundary allows information and concepts to enter and leave the semiosphere – a process carried out by translation. The boundary is also ‘the area of accelerated semiotic processes, which always flow more actively on the periphery of cultural environments, seeking to affix them to the core structures, with a view to displacing them.’[4] Thirdly, the semiosphere is irregular as it can possess a centre (or different centres) and a periphery (or different peripheries). Furthermore, it is internally diverse, made up of different parts which are in communication with one another, much like ‘organs in organisms.’[5] There is both symmetry and asymmetry between its various parts. Finally, between the different components inside the semiosphere, dialogues and interactions take place.

Cavafy’s poem ‘31 B.C. in Alexandria,’ published in 1924, encapsulates the key elements of the semiosphere and illustrates how it works:

From his little village near the outskirts,

And still dusty from his trip,

the peddler arrived. “Incense!” and “Gum!”

he shouts in the streets. But through the noise of the people,

and the music, and parades, how can he be heard?

The crowd shoves him, drags him along, bangs into him.

And when in total confusion he asks, “What’s this madness?”

to him too someone throws the gigantic lie

from the palace: that in Greece, Antony is winning.[6]

In the poem, we are transported to Alexandria in 31 B.C. where we encounter a peddler. He has come from the outskirts of the city to the centre in order to sell his goods. He is unable to carry out his job, however, as there is much commotion and disorder around him. When he tries to find out what has happened, he is told by someone that Antony is winning in battle in Greece. The last line refers to the Battle of Actium which took place in 31 B.C. between Octavian (soon to be called Augustus) and Antony. Antony lost this battle and this event played a vital role in the collapse of the Roman Republic and the birth of the Roman Empire. This poem is told from the point of view of a third-person narrator/observer.

The five components of Lotman’s semiosphere – homogeneity, boundary, irregularity, diversity, and dialogue – are all present in Cavafy’s lines. The city in which the action takes place is a homogenous space: there is a juxtaposition between inside Alexandria, where the events of the poem unfold, and outside Alexandria, where the off-stage battle occurs. News about the battle has travelled across geographical spaces and boundaries to Cleopatra in Alexandria, who then translates, deforms, and embellishes it, before allowing it to cross the boundary separating the palace from the people. The message – that Antony has won – then travels from the crowd to the peddler across the boundary between the crowd and the individual. There is irregularity in the space portrayed in the poem as the peddler moves from the periphery of the city to the centre. He brings with him not only physical, material remnants of his home in the form of the dust, but also his speech patterns. In the original Greek, his diction is musical and poetically structured: there are internal and end rhymes between his words and his speech is different from the speech of the person in the crowd. As a result, there is diversity in the linguistic registers used in the text. The peddler’s words are in dialogue with the speech patterns of the city centre in two ways. On the one hand, both the peddler and the individual in the crowd speak the same tongue; they both understand each other. On the other hand, there is a distinct variation and difference in the structure of the languages spoken: the peddler uses the language of trade, commerce and poetry, and the person in the crowd, who is an indirect messenger from the palace, transfers propagandistic meanings in common, everyday tongue. The dialogue between the individuals in the poem is thus diverse, multi-faceted, and made up of symmetrical and asymmetrical components.

Witnessing and describing this scene is the narrator, who is God-like and able to zoom in and out of space. He gives us the perspectives of the peddler and the ‘someone’ in the crowd, as well as being privy to information about the ‘gigantic lie.’ Even though we can clearly sense the narrator’s irony, no judgment seems to be cast on any of the people in the scene. Cavafy’s narrator is thus located in a similar position to that from which Lotman looks. He sees all perspectives and lets them play out without intervening. A point to underline is the interrelationship between the poet and his text: Cavafy, the Alexandrian, is writing about the Alexandria of more than 1900 years prior. As a result, the narrator/observer, who is situated in Alexandria in 31 B.C., is written into existence by the observer of the early 20th century; the city of the present lies above the city of the past, just as nation states lie above Empires, as shown by the word ‘Greece’ in the final line. The awareness of cultural change that is thus observed by Cavafy, is one that Lotman was also keenly interested in.

The poem does not highlight a strict opposition between the binaries of rural and city spaces, the periphery and the centre, the man and the crowd, but rather shows how various, fluid, boundary transgressions, dialogues, translations and interactions take place. The poem is not simply a text about Alexandria, but about cultures and spaces in general, their structures and the processes that occur within them. It is a text that emphasises Lotman’s thoughts on the complexity of cultures on both a micro and macro level. Through Lotman’s writings, we see how Cavafy’s poetry centres on movements, displacements and transitions through space and not only in time. Consequently, we can move away from talking about Cavafy’s poems in micro groupings, independent from one another, and see them all – whether they deal with erotic, philosophical, historical, religious topics, to name some examples – in a framework of broader spatial categories. In this regard, Cavafy is not just a poet who writes about Alexandria, the Hellenistic period, or sensual love, but one who focuses on literal and metaphorical spatial constructs and changes within them. 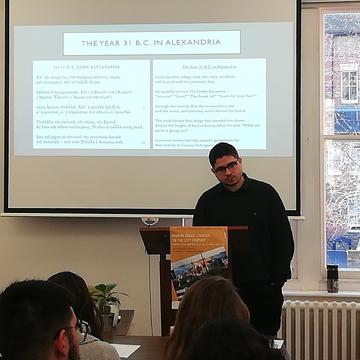