This Knowledge Exchange project involved engaging new audiences with Chaucer’s work, and encouraging new creative responses to Chaucer’s poetry from diverse groups. As a scholar and biographer of Chaucer, Marion Turner has long been committed to speaking to and working with varying audiences.

Her Knowledge Exchange Fellowship enabled a pilot for a bigger project: along with partner organisations, Marion is submitting a bid for major funding for Chaucer-based public-facing projects in 2023, including an exhibition, a play, and long-term work with schools, with a focus on working with children with special educational needs and disabilities.

The Knowledge Exchange pilot involved working with two partner organisations. Flash of Splendour, a local educational arts organisation, ran 24 intensive workshops in a local school with children who would not usually have the opportunity to read Chaucer’s texts. These children learned about Chaucer’s texts and world, and produced creative responses – including making cartoon strips, drawing portraits, and acting out sections of the text.

Creation Theatre put on a new adaptation of one of Chaucer’s Canterbury Tales, the ‘Pardoner’s Tale’. The specially commissioned play was performed in several different Oxford locations including the Covered Market, Blackwell’s, Cherwell School, and the James Street Tavern. One performance of the play (the tale was the inspiration for J K Rowling’s The Deathly Hallows) was on Halloween and included talks by Patience Agbabi, poet and adaptor of Chaucer, and by Marion herself.

The feedback has been extremely positive and demonstrated that engagement with Chaucer immediately challenged preconceptions about this canonical author and his poetry. Comments often focused on how profound the texts are, and on how funny and immediately engaging they are. Everyone wanted more. Now, Marion says, ‘The pilot project has been completed, and the funding bid to continue on a larger scale is in process.

Regardless of the outcome of the major funding bids, I am going to be curating a Chaucer Here and Now exhibition at the Bodleian in 2023, with an accompanying book.’ She notes, ‘I was particularly struck by how effective it is to perform Chaucer’s texts in public, commercial spaces (a pub, a market) rather than in more private and elite spaces. My own next book partly focuses on adaptation and response, and so it was especially interesting from a research standpoint to talk to the Creation Theatre playwright about how he adapted Chaucer for the stage. Insights from the project have also very much shaped my ideas about the Chaucer exhibition and the kind of local and up-to-date material that we might include.’ 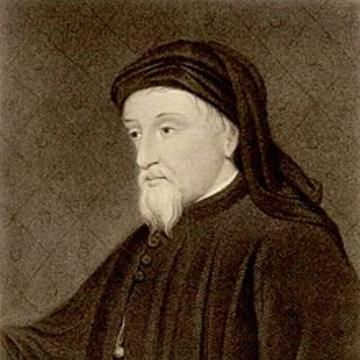