DANSOX look back on their events from Michaelmas 2016

Siobhan Davies returned to the Jacqueline du Pré and DANSOX, for a conversation with artist Jeremy Millar and dancer Helka Kaski to discuss the work for Siobhan Davies Dance’s upcoming event, material / rearranged / to / be. A full house listened to Siobhan and Jeremy as they talked intriguingly about this prospective showing. A structure and concept for the work had been inspired by the practices of the art historian Aby Warburg. In the early twentieth century Warburg collected diverse images of human gestures and poses from different times and places, positioning them side by side to allow new relationships to emerge, and to explore how meanings are constituted by the movement of imagery across time and space. In a similar spirit, material / rearranged / to / be will present a large-scale, modular architecture, continually rearranged by the artists, creating new pathways through the installation and drawing visitors into a journey of discovery. The fluid juxtapositions mean that few visitors will have the same experience. The artists and choreographers involved will combine Warburg’s ideas on bodily communication with the latest research in neuroscience to investigate how movement is felt, observed, and how we reveal and conceal thought in physical behaviour, how we archive or remember past movement, along with a taxonomy of imaginary actions. Dancer Helka Kaski gave an example of the kind of work that will be shown. She demonstrated the way in which she was inspired to explore the minute every-day movements of “fidgeting”. She presented a riveting piece, literally performed while seated on her chair. The conversation was accompanied by a fascinating film that Jeremy had compiled as part of the project. The audience was invited to participate in a lengthy and lively discussion, followed by a drinks reception in the foyer.

Lynn Garafola is a distinguished scholar, teacher, researcher and writer with interests in the field of dance history. She is primarily acknowledged as the leading expert on the Ballets Russes (1909–1929), the subject of her seminal book, Diaghilev's Ballets Russes (1989). She is currently researching a biography of Bronislava Nijinska, who was the sister of Vaslav Nijinsky, but also one of the greatest modernist choreographers of the twentieth century, producing works such as Les Noces (1923); Les Biches (1924); and Le Train bleu (1924). Professor Garafola’s illustrated lecture traced the hurdles faced and overcome by a brilliant woman choreographer struggling to be acknowledged in an often hostile environment. DANSOX patron Sheila Forbes commented, “Professor Garafola’s talk was fascinating, and the Nijinska story is both illuminating and very sad. Sad that so few of her works survived, and in the ways that she was treated both by impresarios and critics. The story of a great unappreciated creative talent, of a refugee to whom her culture continued to be central, and of a woman subjected to an unrelenting stream of misogyny because she stepped outside the culturally accepted roles - a story for our times in many ways.” Heated discussion followed the stimulating lecture,  with a reception in which Professor Garafola continued to answer audience queries. 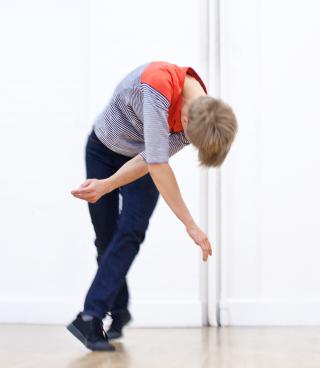