Many years ago a visit to Darwin’s family home, Down House, near Orpington in Kent, transformed my own thinking about the relationship between the arts and science.  Standing in Darwin’s study, walking along his famous Sandy Walk  where he formed his ideas and learning about his homely experiments on the lawn with his children – I was struck by the creativity of the scientific mind, its playfulness, its courage to own truths that would prove devastating to Darwin’s health and faith. The great man of science ends the book that shook the world with language and observations that are not that of scientific theory but those of poetic observation and imaginative wonder:

‘It is interesting to contemplate a tangled bank, clothed with many plants of many kinds, with birds singing on the bushes, with various insects flitting about, and with worms crawling through the damp earth, and to reflect that these elaborately constructed forms, so different from each other, and dependent upon each other in so complex a manner, have all been produced by laws acting around us.’

What better venue to hold the last poetry and science event in this series than in the wonderful Oxford Museum of Natural Science where the Great Oxford Debate on Darwin’s theory took place!

Dr Philip Powell opened the event with a detailed explanation of the geology of Oxfordshire illustrated with his pullout diagram of the layers that formed the landscape of our area. I was immediately confronted by two things  - immense chunks of time  (160 million years) – and some specialised language – rag, chalk, tilt, detritus, strata, oolitic, which I find exciting as a writing resource as it‘s not the language of everyday speech. It is where poetry might take root.  Dr Powell had set out a wonderful selection of fossil specimens in the lecture room and took us out into the museum to examine evidence of how silt, compression and time have formed the very flagstones of the museum floor and the swirling marbles that make such beautiful columns around the perimeter of the museum.

Dr Elsa Hammond, lecturer in English at St Hilda’s College and Penny Boxall, Visiting Research Fellow in the Creative Arts at Merton, then began some exploratory activities into the imaginative process of observation and writing.  We were asked to choose a specimen and examine it in detail: touch, describe and write notes, which we were to develop later in the day.  My chosen piece of Coral – Oppelisimia victoriae, Lower Jurassic, Oxfordshire – on first glance a little like builders’ debris – gave rise to phrases like ‘grained with sea-shapes’, ‘grit broth set hard’, ‘splintered sea-fronds’, ‘ribbed suggestions’, ‘sea midden’, ‘the swell and shape of lost seas’. All of which might find their place in a poem.

After our lunch break, Elsa and Penny introduced the group to a variety of poems that explored landscapes, its rocks and pebbles, in differing voices and viewpoints.

‘From my notebook’s pages, speckled sometimes

where ink has run in water, I find my observations

on the day you left seem much as any other.’

We were encouraged to go back to our earlier notes and begin shaping a piece of writing.  The group of about eight participants, most of whom had little experience of creative writing, all joined in and read out some interesting work.  As a stimulus we examined fossils and rocks under magnification, noting the ways in which details and ’landscapes’ appeared and we used random phrases to embed into writing.  I found this a thoroughly satisfying day, well-organised, relaxed and in inspirational surroundings.  Our opening exercise was to simply   to write around three key words ‘Sediment’, ‘Erosion’ and ‘Unmoved’. I challenged myself to find a poetic ’voice’ for a scientific process.

I am meaningful detritus:

the hard remains of invertebrates that held

first gestures towards arms and legs.

I am the architect and builder of landscapes.

You take my stone, split it into tiles and flags,

bevel the sweep of Crescents, build your cities,

steady your roads with gravel and kerb.

I am the white cliffs on your homeward voyage,

flashed turns of salmon and trout,

the high hill that rewards the view.

I am patient, time is my partner.

Whatever lives will die,

I think only in grains. 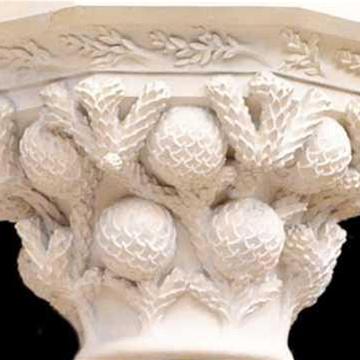