A week before the award-winning film Hidden Figures reached British theatres, the TORCH Race and Resistance series gave presentations on other ‘hidden figures’ in history.

The first presentation showcased the life and works of Harry Burleigh (1866-1949), a black musical composer who was born only one year after the abolition of slavery in the U.S. Though popular and well-respected in his time, Harry Burleigh has—quite tragically—slipped from the public mind in recent decades. The presentation, given by post-graduate student Lynne Foote (Harris Manchester College, Oxford), helped shed some much needed light on his accomplishments.

During his time, Foote emphasized, European ideas of nationalism and ‘equality’ had made the production of national anthems popular. The increasing popularity of national anthems, in addition to the increasing ubiquity of the piano, made the pressure to find a distinctly ‘American’ sound in the U.S a matter of public interest. Harry Burleigh succeeded in identifying the American sound, one completely unique to the character and history of the U.S: the negro spiritual.

Before Burleigh, such spirituals had only been passed down orally by enslaved people to their enslaved children. Burleigh was the first to compose the spirituals, pinpointing the specific musical notes within each song onto paper. He also composed and popularized instrumental accompaniment to the spirituals. His work led to the formation of the famous Fisk Jubilee Singers, a troupe of all black singers, who performed in the White House in 1872 and then before Queen Elizabeth in 1873.

Considered an icon by both the black and white press, Burleigh would go on to influence the formation of gospel and hip hop music as well. Through her postgraduate research, Foote hopes to bring Burleigh’s story back into the public imagination and ensure that he no longer remains a hidden figure.

Evan Matsuyama (St. Anthony’s College, Oxford) gave the second presentation, which focused on “Japanese morality, identity, and ethnicity in the Nikkei struggle against mass incarceration during World War II.” As with many shameful policies directed by those in power, the history of Japanese internment camps during WWII receives very little attention in public classrooms. Only last year, the Los Angeles Times published a letter to the editor where the author described Japanese internment camp not as a system of mass incarceration, but as a “job” that Japanese-Americans had to perform to help the war effort. In the article, he wrote:

Virtually everyone in the U.S was assigned jobs to help the war effort. The Japanese were assigned the job of staying out of the way and not causing complications. Millions of Americans were assigned far worse jobs.

The letter reveals how little Americans understand about Japanese-American history in the U.S. Even those who do know the history of the camps often misinterpret them. As Matsuyama revealed in his presentation, the common narrative around Japanese-Americans in WWII is one around patriotic Japanese-American soldiers who sacrificed for the U.S because of a desire to rise to middle class affluence.

Though Harry Burleigh and Japanese-Americans during WWII come from different eras, they are connected through their shared struggle of redefining national identity. Their stories are also connected through a shared history of public erasure. Research like that of Foote and Matsuyama, however, can help bring them back into public memory. 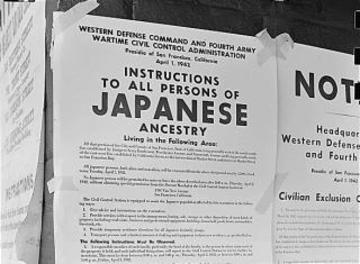