Dorothy owes its place in modern naming to St Dorothea, a virgin supposedly martyred (but all the accounts of her are late and unreliable) during the persecution of Christians by Diocletian, which began in 303 CE.  The Greek name bears its meaning on its face: dōron, ‘gift’, and theos, ‘god’.  So Dorothea is a (feminine) gift of god.  There was a masculine equivalent Dorotheos; the feminine ending –thea indicates the sex of the bearer, not of the god.    Many Greek names combine a god’s name and a second element meaning ‘gift of’ or ‘given by’: so e.g. Asklepiodoros, gift of Asklepios.  Occasionally we can actually show that the child so named was conceived after a prayer to the god in question.  More commonly in such names (technically termed ‘theophoric’) the god’s name comes first; but the order of elements in Greek compound names could be reversed, and Doro-thea is actually just a reverse variant of another much commoner name, Theo-dora.  The two masculine forms Theodoros and Dorotheos sometimes alternate in successive generations of the same family.

‘Gift of god (singular)’ may seem to suggest monotheism, but the suggestion is misleading.  Pagans regularly spoke of (a/the) god when wishing to acknowledge some divine involvement in an event, but unable to identify the particular power responsible.  Both names (Doroth-, Theod-) are attested for both sexes long before the Christian era, though they seem predictably to have surged in popularity when the Roman empire became officially Christian with the conversion of Constantine (312 CE).  Dorothea would have been a usefully neutral name for the parents of St Dorothea, born before Constantine’s conversion, to have given their child if they too were Christian; but of this and of their motives we know nothing.

The name became very popular in the later 16th c. and was soon generating spinoffs (but Dora only came in in the early 19th c.)  The most successful of these, Doll, took it drastically down market, as seen in Shakespeare’s Doll Tearsheet; hence, more respectably, come children’s dolls, and Guys and Dolls.  Its subsequent ups and downs, probably influenced by the dubious associations of ‘Doll’, are  traced by Withycombe in her admirable brief Oxford Dictionary of English Christian Names.  The heroine of Middlemarch, Dorothea Brooke, bears the original Greek name, which will no doubt have pleased Mr Casaubon.  We learn from an 18th c. grammar that the  -h- of Dorothy had become silent, as in Ant(h)ony, and it was perhaps a single classicizing impulse that caused the -h- to be sounded again and resurrected the Greek form Dorothea.

St Dorothea’s legend told how she was mocked on her way to execution by a young pagan lawyer Theophilos.  He asked her to send him fruits from the paradise she claimed to be heading to; when, after her death, an angel courier arrived with three apples and three roses, he converted and was martyred in his turn.  The legend underlies The Virgin Martyr by Massinger and Dekker, early poems by G.M. Hopkins and a ballad by Swinburne that goes on and on.  What interests the student of names is the young man Theophilos, ‘dear to god’; if he ever existed (but the Lexicon of Greek Personal Names dismisses him with a curt ‘fict.’), he like Dorothea bore a name (so too its reverse Philotheos) equally appropriate for pagan and Christian. 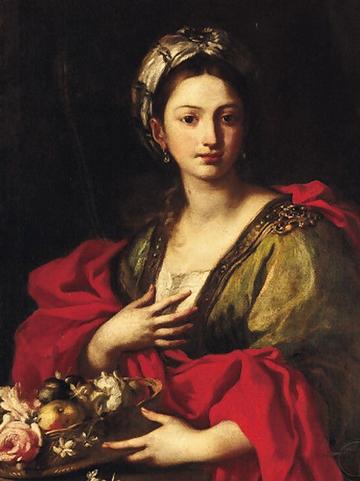