Ecologies of Knowledge and Practice: Japanese Studies and the Environmental Humanities

How does research on Japan inform ecological practice that is pertinent beyond the framework of area studies, and vice versa? If we were to place nature at the core of our studies of human activities, what new kinds of interdisciplinarity and knowledge would be possible, and how would we reorganize our academic disciplines?

The workshop ‘Ecologies of Knowledge and Practice: Japanese Studies and the Environmental Humanities’ was held at St Antony’s College from 27th to 28th October 2017, with funding from TORCH, the Japan Foundation, and St Antony’s College Antonian Fund. We convened fourteen papers from postgraduates and Early Career Researchers within the Humanities for an inter-disciplinary discussion with guidance from established scholars and practitioners. During one-and-a-half days of presentations and discussions, an emerging generation of international Japan scholars considered how the production of knowledge of Japan may be linked to new forms of engagement with contemporary ecological concerns.

In today’s world of planetary-scale environmental crises, intellectuals are increasingly urged to cultivate a symbiosis between knowledge and practice and to engage with each other beyond disciplinary divides. Historically, Japan has claimed a uniquely harmonious relationship with nature. Yet this cultural rhetoric of ecology has faced challenges for its apparent discordance with the reality of environmental destruction in Japan.

The field of Japanese Studies outside Japan has also been criticised: on the one hand, for exoticising Japan as a unique “other”, yet conversely, for forcing Japan into a hegemonic model of universal (Western) modernity. While such ideological controversies are ongoing, the study of Japan in the twenty-first century is becoming increasingly and inescapably intertwined with the rise of global environmental problems such as climate change, nuclear catastrophe, deforestation and threats to marine life. The challenges of ecocriticism follow hot on the heels of the politics of still-prevailing Orientalism.

The workshop opened with an introductory talk by co-organiser Eiko Honda (University of Oxford) emphasising the pitfalls of Orientalism in Japanese Studies and the environmental humanities. Eiko argued for the need to overcome Eurocentrism, the narrow framework of the nation-state, and binaries such as East and West, and suggested planetary nature as a conceptual basis for knowing and practising Area Studies in the twenty-first century.
Professor Sho Konishi’s keynote speech on the history of anarchist science in Japanese transnational relations also offered a trenchant challenge both to the historical paradigm of Western modernity and to the binaries of East-West and nature-culture. Taking early twentieth century Japanese interest in the dung beetle as his subject, Professor Konishi showed how science as a transnational practice became the basis of transnational anarchist order and language, in which the humanities and social sciences were united with the natural sciences.

The workshop concluded with a session on how to practise academic research and teaching in an ecologically sustainable way. Alice Freeman (University of Oxford) opened the session with the dilemma of the carbon footprint of air travel produced by fieldwork overseas. Russell Beard cheered us up with his presentation on inspiring environmental action through film, and Jenny White inspired us to action through an enlightening talk on green practices within academic institutions. The workshop ended with a final discussion on practice and on the ideas of the past two days as a whole.

In addition to the participants and presenters, the workshop was attended by over thirty audience members, including postgraduates, early career researchers and senior scholars from the UK and Japan. Discussions begun during the workshop were continued informally over lunch and at an evening reception at the Turl Street Kitchen. One of the most successful aspects of the workshop was its interdisciplinary nature. Our only regret was that there was not more time for discussion, but we hope that this initiative will be the beginning of further academic ventures. We plan to publish a selection of the papers in a special edition journal. 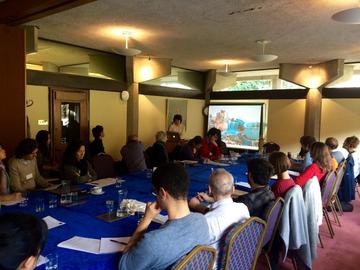