The Fiction and Human Rights Network and Race and Resistance Blog

Friday 27th of January saw a first for the University of Oxford: a seminar on the work of Haitian-American writer Edwidge Danticat, presented as a joint event by TORCH’s Fiction and Human Rights Network and the Race and Resistance Programme. While Danticat is well known and well-received in the US for her both fiction and non-fiction work (largely thanks to Oprah Winfrey’s infamous Book Club), her name is not as familiar on this side of the Atlantic. Yet, as became apparent over the course of the discussion, there is much we can gain from an encounter with her texts and the worlds they open up to us. While her work is a great pleasure to engage with, being both eminently readable and suggestively experimental, it also does much to aid our understanding of the relations between writing , reading, politics, representation, mobility, desire and belonging, moving from universal truths about the human condition to the intractably specific texture of her own Haitian-American upbringing.

The discussion was led by Jemima Paine, graduate student in French and English at St Hilda’s College, and Charles Forsdick, James Barrow Professor of French at the University of Liverpool. Jemima began by introducing one of Danticat’s non-fiction texts, Create Dangerously: the immigrant artist at work. Danticat’s split identity between Haiti and the US raises issues for the author of representation and responsibility, a tension at the forefront of this series of essays. Does the fact that she left Haiti as a child mean that she can still serve as a legitimate voice for its people? And, as one of the few Anglophone Haitian writers currently producing work, does she have a greater responsibility for factual representation of a people who are little understood and oft demonized? Jemima lucidly navigated these questions, drawing attention to Danticat’s own self-conscious insecurities about the limits of representation, while also critiquing the relation Danticat aims to establish between herself and her readership as a utopian unity, which is in reality rarely achieved.

In turn, Charles introduced Danticat’s Haitian travelogue, After the Dance, a rare example of Caribbean travel-writing for a site that is more often described by white Western visitors than itself a source of this kind of exploratory discourse. As an immigrant writer, there is the sense that all Danticat’s work is a kind of travel literature, inherently concerned with questions of dislocation and uprooting, and the complex journeys of imperfect arrival and return. This text directly addresses the recurrent personal focus in her work on mobility and location, or more specifically, motility, the relative and limited access to means of movement available to people with limited freedom. While travel writing is often self-indulgent, Charles pointed out the aesthetics of self-erasure at work here, Danticat maintaining silence in order to allow other voices to speak through the stage she creates for them. Her work thus presents a much needed challenge to the dominant, largely negative representations of Haitian culture, inviting us in to a new kind of story about a people and a country we must concede we know little about.

General discussion began with considerations of the universality of the feeling of not belonging, the ‘ontological queasiness’ all of us experience and which we encounter through literature, in contrast to the specificity in world literature of politico-cultural situations vastly different from our own. This led to emphasis on the singularity of the reader engaging with the text, and how this engagement affects the mode of representation the author aims to convey, be it idealist or realist, and how Danticat’s theoretical practice is shaped by moments of idealised union with writers in her own reading. The seminar ended on the potentially thorny issue of ignorance: why is it that Danticat is so little known in the UK? Charles posited the invisibility of Haiti in the British imaginary, and the underlying colonial tensions that might explain this. Yet, these reasons seemed an inadequate explanation: the best response is simply to pick up one of Danticat’s texts, and see for yourself how her work brings to life the relation between literature and human freedom. 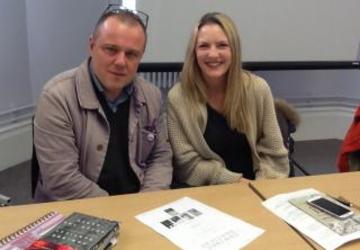