Empire on Display: Curatorial Research Micro-Internship on the Clive Collection at Powis Castle

After Michaelmas term finished, I was part of an amazing team of six interns staying in Oxford tackling databases of the Clive Collection at Powis Castle in Wales, which is owned by the National Trust. During this week-long internship we worked alongside Alice Purkiss and Dr Kieran Hazzard to build on research conducted in Oxford to help advance the National Trust’s understanding of this Indian collection.

To provide some historical background to this complex research: The Clive Collection was amassed by Robert Clive (1725-1774) and his son and daughter-in-law Edward (1754-1839) and Henrietta Clive (née Herbert, 1758-1830) during their time in India working for the East India Company (EIC). Robert Clive was an influential and opportunistic man; having joined the EIC first as a merchant, he changed to its army and rose to the high position of Governor of Bengal. Through personal alliances with semi-autonomous rulers under the Mughal Emperor he established a stronger footing for the EIC in India. His military success at the Battle of Plassey (1757) defeating the Nawab of Bengal established the EIC as a major political player in India, furthering British imperial ambitions. This left Bengal’s Royal Treasury open for Clive to take what he liked and the EIC with an overbearing presence that soon resulted in further conflict and eventually the Grant of the Diwani, the tax rights over Indian territories from the Mughal Emperor. Robert Clive helped brutally establishing British imperial power in India and gained immense wealth from it.

Robert started to bring back looted, gifted and bought objects from India and East Asia to Britain. Edward, following his father in the EIC, also returned to India several times alongside his wife Henrietta, a passionate naturalist who undertook a diplomatic tour around the British-occupied territories of South India in 1800. This was shortly after the fall of Tipu Sultan, ruler of Mysore, who had been a continuous threat to the EIC, and had attempted to align himself with France to fight the British presence in India. Following the Siege of Seringapatam in 1799 and Tipu’s death, the EIC extended its territory in India further and many of his treasures were shipped back to Britain; some of which are today displayed in various national museums in the UK including Powis Castle, the home of Edward and Henrietta Clive.

The principal task for us as interns was to cross-reference an archival database with the National Trust’s online collections, which make everything owned by the National Trust available for researchers online. The work was designed to support Dr Hazzard’s current Knowledge Exchange Fellowship with Powis Castle at the Ashmolean Museum, and built upon work undertaken by a previous cohort of interns.  The archival database was previously compiled by Dr Hazzard using the documents, letters and inventories of the Clive family from the 18th century, but the painstaking task of matching documentary evidence to objects remained to be done by us.

The database contained references to various objects ranging from boxes, portraits, porcelain, huqqa pipes (better known in Britain as shisha), weapons, furniture and other decorative arts. The information in the database allowed us to understand the imperial biographies  of the objects individual stories as far as possible – were they looted, gifted or bought and when? The six of us were covering arms and armour, furniture, decorative arts and a 1980s catalogue of the collection. At first the vague historical descriptions made it complicated to find matches: What is the difference between gold and silver-gilt or how should we identify individual arrows, knives, pieces of porcelain or intricate boxes based on merely their amount listed in an inventory? Chats over lunch and through the shared database made identification easier. A day-trip to Wales to visit Powis Castle also put our research into greater perspective.

We spent a very long time throughout this week sharing our finds, but more importantly rethinking the collection’s imperial biographies currently displayed in a very orientalised (i.e. a very stereotypical Western interpretation of Asia) display arranged by the National Trust in the 1980s. Alongside the National Trust’s lead curator, the assistant director (consultancy) of Wales and the conservator at Powis Castle, we talked about curatorial strategies allowing to tell these imperial stories that may make some visitors uncomfortable, how to make the collection more accessible to visitors in general and how to display the individual objects (like the precious lion head from Tipu’s throne or the Ganjifa Playing Cards) better, so they can tell their own story and invite people to want to know more about India’s history, British imperialism and the Clive family.

This internship gave me a unique experience working with a collection and experts in the National Trust, actively participating in helping to make a change to the many untold and undiscovered stories living within country houses. Working as part of a team with people of so many different backgrounds amazed me and has truly made this a time I will cherish forever.

Isabelle Riepe is Lidl Scholarship Holder for MSt Modern Languages (German) at the University of Oxford, focussing on the European Enlightenment. She is interested in global cross-cultural (dis)connections during the eighteenth and nineteenth centuries currently looking at links between material culture and German ‘Weltliteratur’ (world literature). An active participant of Heritage Pathways she aims to work in the Heritage sector after pursuing a PhD. She tweets @isabelleriepe

Find out more about the National Trust Partnership here 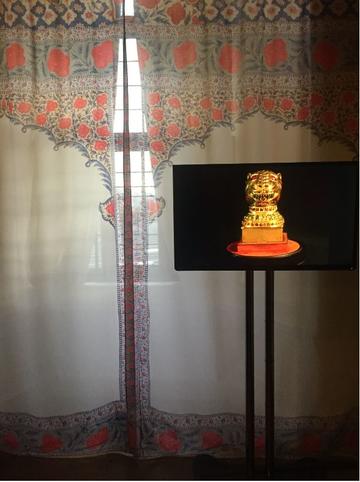