Expanding Networks with the Ditchley Foundation

This summer, I joined a team of interns at the Ditchley Foundation, located in Ditchley Park, for a research internship supervised by Martin Smith, Ditchley’s Chief Technology Officer.

Having had all my summer plans disrupted by the unpredictability of 2020, in late spring I found myself looking for remote internships that I would be able to complete from the comfort of my own home. This is how I came across the opportunity of a summer internship with the Ditchley Foundation, a unique one at the intersection of heritage, charity work and data.

Out of four possible internship projects, I was offered a place on the networks internship, as part of a large and friendly team of other student interns. The project’s aims were to consolidate and expand Ditchley’s network of contacts, which is invaluable to the organisation of conferences that constitutes the chief of the Foundation’s work. One way we did this involved researching individuals already in Ditchley’s network and classifying them according to guidelines to determine their level and area of expertise. Moreover, we also researched unaffiliated organisations pertinent to areas that Ditchley would like to expand into and conducted a quantitative analysis of the existing network to identify its strengths and weaknesses.

The variety of the work meant that I was always learning, and I never got bored. Ditchley was very welcoming and supportive to its interns: we had several contacts in case of issues or even mundane questions, two professionals aiding and guiding us directly in the work, and daily meetings to make sure that everyone was on the same page. I always felt comfortable asking questions and admitting when I needed help with the work. There were also weekly social calls which we used to organise friendly debates around current world issues, planned and hosted by interns. These occasions were always informative and enjoyable.

Remote working presented the challenge of organising my own time in an effective and healthy way. I did this by setting fixed times for myself to begin and end work, making sure that I both met deadlines and looked after myself. My daily routine consisted of beginning around 9:30 in the morning, checking my messages from my supervisors and teammates, checking my Google Calendar to note the time of any Zoom meetings, and then getting on with the research or analysis as necessary. I took a break for lunch around 1pm, and then worked until 5 or 6pm, depending on how much I still needed to do. Afterwards, I would check my personal emails, do some admin as necessary, and then switch off my computer and spend time with my family. I tried to make my time off varied and relaxing: I like to cook, read, and when I felt especially tired, I would unwind with a film. Sticking to this routine helped me not get too stressed, and to begin each day feeling refreshed and focused.

Our work was productive and generated visible results, making it very rewarding. The achievements that I was most proud of were identifying interesting and innovative local organisations that Ditchley may like to connect with, as well as developing and becoming more confident in statistical analysis and the R programming language. I feel that I have made tangible progress in my analytical skills, as well as having learnt many interesting facts about places and people that I found out during my research.

Overall, my internship at the Ditchley Foundation was a very varied and enjoyable experience. The variety of projects available meant that we had some choice to focus on the ones we found most interesting, and that the work never became repetitive. I also enjoyed working alongside other interns and getting to know them as people during our weekly social calls. I feel that I gained important quantitative analysis abilities from this internship, as well as developing important skills for the workplace, such as multitasking and working as part of a team. I am now also much more comfortable with video calls in a professional setting, which we are all likely to have to keep using for a while. The experience has opened my mind to different career possibilities in research for charities or thinktanks, which I had not considered thus far. It has also led me to focus on my digital, and especially programming skills, which I now plan to keep developing on my own. Working for Ditchley has reminded me of the importance of flexibility and of trying new things outside of my comfort zone, that nobody expects perfection, but that what is most important is putting in the work and the effort.

Marina Adami graduated from her BA in Philosophy, Politics and Economics (Regent’s Park College) in 2020. She hopes to pursue a career in the non-profit sector. 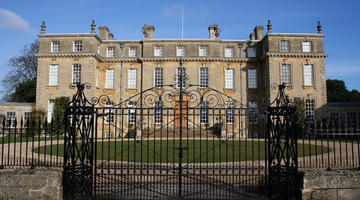