Curating the Royal Image for Dynasty, Nation and Empire

Alongside celebrating, birthdays can often provide a powerful impetus for thoughtful reflection. In March 2018, as I was nearing the end of my TORCH Knowledge Exchange Fellowship, Dr Oliver Cox fatefully introduced me to Joanna Marschner (Historic Royal Palaces) and Michael Hatt (Warwick) who had some big ideas for marking the occasion of the 200th birth anniversary of Queen Victoria, which was looming on 24 May 2019.

Joanna and Michael were principal investigators of the AHRC-funded research network, ‘Victoria’s self-fashioning: Curating the royal image for dynasty, nation and empire’ – a project that was seeking to engage with new academic research perspectives in order to scope out fresh and innovative ways of interpreting Victoria’s legacy and its on-going impact, two hundred years after her birth. My earlier DPhil project had explored the evolving nature of British and Indian royal relations and culture over the course of the nineteenth century; focusing in particular on Queen Victoria’s ties with the family of Maharajah Ranjit Singh, who ruled over the Sikh Empire in northern India. Needless to say, I was overjoyed to hear about Joanna and Michael’s project – there was so much to discuss!

I became a contributor to the series of three international conferences that they organised over the next academic year: at Windsor Castle, the Paul Mellon Centre and Kensington Palace. I presented some of my own research findings at the first and last of these events, sharing insights into the gendered and political dynamics of Victoria’s personal relations with her young royal protégés (as I call them) from different parts of Europe and the burgeoning British Empire, and analysing what this adds to our understanding of how this queen actively and self-consciously embraced such connections: utilising them to project a new, idealised image of herself as their mentor and benefactor. I pointed to how this disturbs common historical interpretations of Victoria as a politically introverted figure, or of the British monarchy’s agency supposedly being in decline in this period (which is perhaps fair for domestic politics, but certainly not for the ever-changing field of the nineteenth-century empire).

I couldn’t have been in better, more exciting company at these events. The conferences brought together leading academics, curators and heritage specialists from across the globe: who have all been doing pioneering work in the increasingly overlapping fields of Victorian Studies; curatorial/museum practice; and histories of monarchy, empire, gender and culture. The workshop at the Paul Mellon Centre then concentrated our minds towards thinking about how to harness these ground-breaking research perspectives, so as to be able to have a larger, effective impact on audiences visiting Kensington Palace (Queen Victoria’s birthplace and childhood home) or more globally, via new digital outlets. As an early career academic with a lively passion for public engagement, it was an incredibly inspiring conversation to be a part of. One can only hope that the impact of Covid-19 on the heritage and museums sector does not drastically derail the fantastic outputs that were being imagined for the future as a result of that workshop.

Thinking back overall on my experience of the Fashioning Victoria project, and then subsequently of working as a consultant with the HRP curatorial team on their Victoria: Woman and Crown exhibition and community outreach endeavours, there were two key ‘takeaway points’ that really struck me. The first was something that I knew all along, but which was really reinforced for me while working on these projects – that the history of monarchs and palaces are about much more than the standard fare that we often hear about royal family drama and intrigue! Yes, such stories can be compelling enough sometimes; but they all too often have inner nuances and outer connections with big political subjects like race, gender, empire and class, which still desperately need to be explored and investigated further. Such research can deepen our historical understanding of the terms on with such elites existed, and what the true extent of their impact and status within past societies were.

The other, connected point, was that such insights can result in ever-more interesting content and narratives that can be shared with public audiences, who can in turn help to add more layers by contributing their own interpretations. The collaborative work that I was involved in with HRP was an exciting opportunity to see how Queen Victoria – a global icon who evokes very different responses and historical memories amongst very different people – could be a fascinating test case and lightning rod for experimenting with how diverse audiences could be creatively engaged with re-imagining and asking fresh questions of our collective past. This is valuable in and of itself, to revolutionise how we disseminate stories about royal or elite history, and to open up visitor access to places like Kensington Palace, or to collections owned by institutions such as HRP or the Royal Archives. But it can equally be of some help for developing new and alternative models for engaging more people with a multitude of other histories, should we dare to try more often.

Dr Priya Atwal is currently based at King’s College London, as a Teaching Fellow in Modern South Asian History. She completed her History DPhil at Lady Margaret Hall in June 2017 and was a TORCH Knowledge Exchange Fellow from 2017-18, with her project, ‘The Indian Army in the First World War: an Oxfordshire perspective’. Her first book, Royals and Rebels: The Rise and Fall of the Sikh Empire will be published in September 2020. She tweets at @priyaatwal. 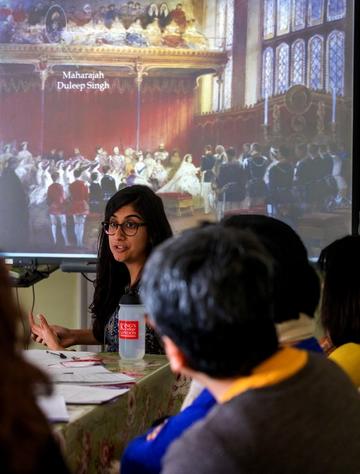 Dr Atwal giving a talk to the community outreach volunteers who were involved in the Victoria exhibition.