As part of this week’s TORCH Goes Digital theme of Storytelling, Dr Oliver Cox reflects on one of the most exciting discoveries that the TORCH Heritage Programme has been involved with: finding a Shakespeare First Folio on the Isle of Bute.

Over the past seven years, the TORCH Heritage Programme has developed a wide range of links and connections with historic house collections, from Blenheim Palace to the houses of the National Trust. These relationships are based on the idea of mutual benefit: connecting expertise in Oxford with hitherto under-explored archives and historic collections to unlock new research discoveries and tell new stories to visitors. It was during one such exploratory archival visit at Mount Stuart, on the Isle of Bute, that we made such our exciting discovery.

As an eighteenth-century historian with a research interest in the Bute family who lived at Mount Stuart, I had been desperate to visit the collection for many years. At a 2015 meeting of the Centre for Scotland’s Land Futures in Dundee, where I was representing the Thames Valley Country House Partnership, I met the then Head of Historic Collections at Mount Stuart, Alice Martin, and convinced her to let me visit. The Bute Collection did not disappoint. Mount Stuart houses one of the UK’s foremost collections of artworks and artefacts built up over six hundred years of commission and purchase. It was during this visit that the team at Mount Stuart mentioned the First Folio to me, and I knew that I had to tell Oxford’s Professor of Shakespeare Studies, Emma Smith.

Emma identified the Folio as the working copy that formerly belonged to Isaac Reed, a well-connected literary editor working in London in the 18th century, and in an article first published in 2016 she explained the Folio’s significance:

'When the team at Mount Stuart first told me they thought they had a First Folio, I must admit I thought "yeah, sure, and so do I! But when I went up to investigate, I could see from the watermarks and the idiosyncracies of the text that it was genuine. It was a really exciting moment, I find First Folios to be such charismatic books.

This is an exciting discovery because we didn’t know it existed and it was owned by someone who edited Shakespeare in the 18th Century. It is an unusual Folio because it is bound in three volumes and has lots of spare blank pages which would have been used for illustrations. This First Folio belonged to Isaac Reed, a serious and well-connected literary editor who had an extensive library.

A letter from Reed shows that he acquired the Folio in 1786, and records show that it was sold shortly after Reed’s death in 1807 to a ‘JW’ for £38. After that the trail of the Folio goes cold as there are no further public records of its existence and it was omitted from Sidney Lee's 1906 census of First Folios.

But we know that Mount Stuart acquired the Folio at some point in this period because it is mentioned in a catalogue of the Bute library in 1896. In fact, a note in the house’s archives show that the 3rd Marquess of Bute thought the sum for which it sold in 1807 was ‘too dear’ so perhaps the family found the price more reasonable when the book came onto the market later in the 19th century.'

Working with Professor Smith, the University’s press office, and our colleagues up at Mount Stuart, we let the world know about this new discovery one week before the 400th anniversary of Shakespeare’s death. The press coverage was remarkable – from BBC News and Radio 4’s Today Programme through to the New York Times – and the Folio brought global attention to a small island off the west coast of Scotland.

This discovery provided the foundation for a wider range of collaborations with the University of Oxford. We were able to provide a range of funded internships for undergraduate and graduate students to help research the Bute Collection, including topics as diverse as Jacobitism and the Spanish Inquisition. The collection is especially renowned for the artworks collected by the 3rd Earl of Bute, tutor to King George III and Prime Minister, from the 1750s onwards. Working with the team at Mount Stuart, I wrote a catalogue essay and contributed to the curatorial work underpinning the exhibition Art of Power: Masterpieces from the Bute Collection at The Hunterian Museum in Glasgow.

Our partnership work with The Bute Collection at Mount Stuart highlights the extraordinary research, knowledge exchange and public engagement with research potential contained within historic house collections across the UK. These collections are local gateways to global stories.

Oliver Cox is Heritage Engagement Fellow at the University of Oxford. He co-ordinates, supports and brokers collaborative research and engagement projects between the University of Oxford and external partners in the UK and international heritage sector, through enabling individual researchers, research groups, students and professional services to develop mutually-beneficial collaborations.

Oliver leads the TORCH Heritage Programme, is co-Lead of the Oxford University Heritage Network and part of the team delivering the University of Oxford’s strategic partnership with the National Trust. Oliver co-leads the Heritage Pathway Graduate Training Programme. He is also the inaugural Humanities Innovation Champion for Oxford University Innovation in recognition of his external consultancy. 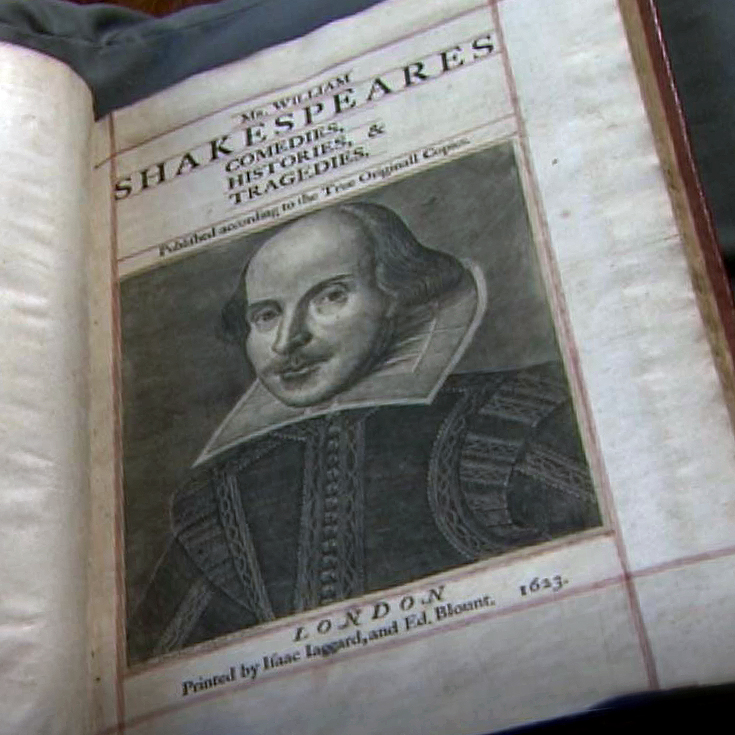 The Shakespeare First Folio that was discovered on the Isle of Bute. © Mount Stuart