So does Kim Kardashian have a talent? I would say absolutely. She is unbelievably talented at the fame game. And remember, a lot of the time talent doesn’t even require awareness necessarily — it is just natural talent. And also remember that having millions of people who hate you is nothing but great for business! Asa Hawks, starcasm.net, 20 December 2014.

Part of the job description for modern female celebrities, coverage of the reality TV star Kim Kardashian suggests, is the ability to cope with “having millions of people who hate you.” Kardashian in particular is regularly told that she represents, and is probably somehow responsible for, “everything that is wrong with Western society today”. Celebrities are bad examples for children, these complaints go, because instead of making art or doing good, their talent is for selling themselves, turning emotion and intimacy – and sex – into profit. Yet behind many of these complaints, we might detect a dislike of the ‘diva’ – the kind of woman who enjoys attention, who has the temerity to promote herself and take care of her own interests – and a more general distrust of social mobility. Celebrity is one way for young women to gain wealth and status, but the payoff for a woman who makes a career out of her own personality, appearance, and sex appeal is often exposure to accusations of greed, vacuousness and prostitution.

There is nothing new about this kind of hyperbolic backlash against “the fame game”, and the financial rewards and adulation it offers young women who provoke emotion and demand attention. Something similar accompanied the earliest forms of celebrity. For the satirical cartoonist James Gillray in 1784, it was the celebrated Mrs Sarah Siddons who was causing the downfall of civilization. Siddons was probably the most famous actress in the world in the late eighteenth century. Born into the well-known Kemble family of actors and theatre managers, she had clawed her way up through bit parts in provincial theatres before getting noticed by David Garrick, and becoming the star of Drury Lane. As such, her salary was astronomical, she moved in fashionable, aristocratic and even royal social circles, and the newspapers reported her every move. When she acted in tragic roles, such as Lady Macbeth, audiences sobbed, fainted, and fell into hysterical fits. This kind of power, placed in the hands of an ordinary young woman by a combination of charisma and smart media management, could seem to alarmed commentators like Gillray to upset all the conventions of social and gender hierarchy.

So as Siddons stands on stage in Gillray’s picture, worshipped by a mindless audience, something cataclysmic is happening in the theatre. Flames and smoke billow out from the pit, while in the distance the symbolic Temple of Fame is collapsing, and the classical figure on its roof is in imminent danger of falling. Siddons’s popularity is a disaster for pure, real fame and the elite, traditional culture represented by the theatre, Gillray suggests. Specifically, his cartoon refers to rumours that the actress had refused to perform for free in ‘benefits’ for other actors – the eighteenth-century equivalent of snubbing charity work. Siddons is shown with a bulging purse hidden under her skirt, disingenuously begging for more:

Famish’d & spent relieving others woe,
Your poor devoted Suppliant only begs,
This morsel for to buy a bit of Bread.

Gillray’s point is not only that Siddons is greedy or mean. He wants to emphasise that her ‘art’ is a performance for money, to undermine her public image of gentility and dignity by reminding us of the grubby commercial nature of her celebrity. He parodies Joshua Reynold’s portrait of Siddons as Melpomene, the Muse of Tragedy. This portrait was a sensation in 1784, and provided her with national publicity as a regal, powerfully emotive figure.

Gillray’s parody shatters this image by insisting that the actress can be neither a classical ideal nor a queen: as long as she is making money from her fame, she’s just a social upstart – another diva who doesn’t know her place. And although Siddons tried very hard to project the image of a respectable married woman and mother (she had famously brought her children on stage in a publicity stunt in 1782), the simple fact that she was a woman in the public gaze meant, to Gillray, that she was selling herself as sex object. In the caricature, as she reaches for two distinctly scrotal-looking bags of money dangling from a pitchfork, her skirt blows back and her breasts threaten to spill out of her dress. The titillated audience, shouting for more, don’t realise that the theatre – and art itself – is crashing and burning down around them. As the Telegraph wrote of Kardashian in 2012, “the descent of Western civilisation can practically be read into every curve.”

Many more caricatures of celebrity will be on display at the end of this month at the Ashmolean Museum’s exhibition, Love Bites: Caricatures of James Gillray (26 March- 21 June 2015). Follow the link for more details and to book your tickets! 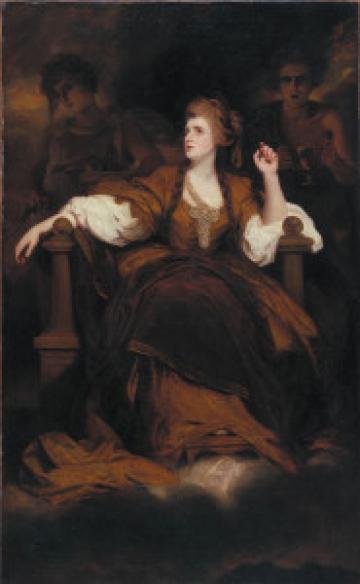