Emma Parker, University of Leeds, reviews Sarah Lightman’s edited collection, Graphic De-tails: Jewish Women’s Confessional Comics in Essays and Interviews (2014). Sarah Light-man will be speaking at the TORCH Comics Network about this collection and her other work on 19th January 2016.

In 2010, Sarah Lightman co-curated an exhibition that toured internationally, entitled ‘Graphic De-tails: Confessional Comics by Jewish Women’. Presenting a selection of of autobiographical comics by Jewish women, the exhibition celebrated the important but hitherto unrecognised role that female Jewish artists have played in the world of comics.

Despite the popularity of work by male Jewish comic artists (embodied most obviously in the con-tinuing success of Art Spiegelman’s Maus), Lightman's preface argues that comics by Jewish women still fail to receive the recognition they deserve. Graphic Details: Jewish Women’s Confes-sional Comics in Essays and Interviews (2014) reproduces many of the comics originally displayed in Lightman’s exhibition, from Joanne Leonard’s beautiful collages dealing with miscarriage to Sarah Glidden’s delicate use of light and colour in the excerpts from her graphic novel, How to Under-stand Israel in 60 Days or Less (2011). Extracts of work by eighteen female artists are then inter-spersed with an impressive array of critical commentaries, interviews and essays.

Appropriately, Lightman opens the collection with a confession of her own. She explains that this project began when she was an undergraduate art student. After being unceremoniously dumped via phone outside the Tate Modern, she explains how ‘I found myself, a Jewish woman comic art-ist, without peers’. Her subsequent efforts to bring ‘comics by Jewish women into established art spaces’ was part of her attempt to bring together ‘the creative family I had always hoped for’.

As a comics practitioner herself (her autobiographical work The Book of Sarah is due to be pub-lished by Myriad in 2018), and as one of the founding members of the comics forum ‘Laydeez do Comics’, Lightman has succeeded in her quest to discover her ‘creative family’. Her work has helped build new communities of comics enthusiasts and given female Jewish artists a new plat-form for their comics. She situates Graphic Details within an expanding academic interest in wom-en’s comics, as evidenced by a growing number of critical monographs from academics such as Hillary Chute, Deborah Whaley and Elizabeth El Refaie.

Graphic Details is, Lightman states, a recuperative project. Focussing exclusively on female au-thors, it attempts to redress the balance of power, to place ‘their work at the center, not the side-lines’. The omission of female artists from earlier discussions of Jewish comics has ensured, Lightman argues, that ‘the history of comics is incomplete and inaccurate’. Michael Kaminer, Lightman’s co-curator, argues that confessional comics were a crucial weapon (or, as he puts it, a ‘throat grab’) for women fighting against the underground comics scene’s misogyny in the 1970s.

Graphic Details’ attempt to re-situate these artists within wider critical discussions is admirable, but it does on occasion overlook some pressing questions. As a collection, it never quite engages with the ways in which the specific medium of comics might offer female artists new ways of writing autobiographically. In turn, and despite Sarah Jaffe’s brief framing of confessional writing as a gen-re, it also rarely considers that confessional literature might restrict, as much as enable, female comics artists.

These oversights are perhaps encapsulated in the fact that Graphic Details uses the terms ‘confes-sion’ and ‘autobiography’ interchangeably throughout. Consequently, the opportunity to differentiate between the two concepts, or to explore confession as a specific facet of autobiography, is sadly missed. The popularity of recent confessional memoirs such as Caitlin Moran’s How to Be a Woman (2012) or Lena Dunham’s Not That Kind of Girl (2014) both fuel and reflect readers’ expectations that confessional autobiographies should be intimate, shocking and revealing. These best-sellers should remind us that ‘confession’ is a loaded term containing both possibilities and restrictions for female authors.

This aside, Graphic Details highlights a range of highly talented comics artists and offers an im-pressive array of essays covering female Jewish experiences. In a particularly notable piece, Ariela Freedman offers an analysis of Charlotte Salomon’s Leben? oder Theatre?: Ein Singspiel (Life? or Theatre?: A Song play), positioning Salomon’s haunting autobiographical paintings as stylistically preemptive of Marianne Satrapi’s now widely popular graphic memoir Persepolis (2000). Salomon was murdered in the gas chambers of Auschwitz in 1943 and her sequential paintings continue to generate interest amongst art historians (in a recent essay Griselda Pollock praised Salomon’s ‘ravishing range of visualities’). Yet Freedman’s insistence that Salomon’s work be viewed as a ‘graphic narrative rather than an artist’s book’ challenges previous readings of this art and invites a fascinating reassessment of her critical reputation.

Lightman’s editorial skills bring together analyses such as Freedman’s with commentaries on con-temporary issues, from the pain of miscarriage to the social faux pas described by David Brauner in ‘The Turd that Won’t Flush: The Comedy of Jewish Self-Hatred’. In various ways, all the pieces reproduced in Graphic Details are demonstrative of the exciting possibilities of writing lives through comics. While there is still much work to be done in the study of autobiographical comics, Graphic Details delivers an important insight into a still-undervalued field of study.

Emma Parker is a PhD candidate at the School of English, University of Leeds, where she is currently researching postcolonial women’s life-writing. Her research interests include colonial and postcolonial literature, travel writing, modernism and graphic memoirs. Her doctoral research is funded by the White Rose College of the Arts and Humanities (AHRC). 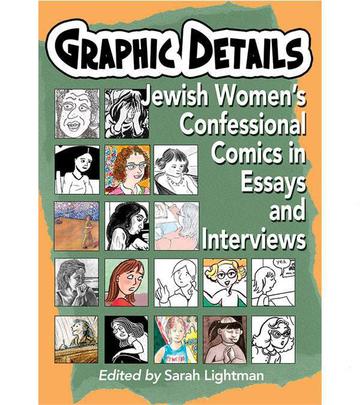