Despite the unexpected snowfall, the second workshop in the Monumental Commemoration Strand took place on Saturday 2 March at Harris Manchester College. The panel-led workshop was chaired by Dr Joshua Hordern, who did a fantastic job steering the discussion and keeping the focus on the event’s core question, ‘what is the function and future of monumental commemoration?’. Given the extraordinary diversity of the participants’ professional backgrounds, this was no small task.

The first speaker was Pfarrerin Dr Cornelia Kulawik, who spoke about the Kaiser Wilhelm Memorial Church (the Kaiser-Wilhelm-Gedächtniskirche), which was all but destroyed in an Allied air raid in November 1943. Only the spire and parts of the entrance hall survived intact. The ruins of the Memorial Church, as well as the relatively swift construction of a new church on the site next to it, became a Berlin landmark and a symbol of peace. A local priest used nails from the ruins of the original medieval roof, tied them together into the shape of a cross and gave this to Coventry Cathedral as a symbol of God’s presence in the midst of destruction.  The Kaiser Wilhelm Memorial Church also received nail crosses from other churches; one commemoration cross, given as a sign of reconciliation, was received from the Russian Orthodox Church and the second Cross of Nails was a gift from Coventry Cathedral.

Pfarrerin Kulawik’s talk was followed by a moving presentation given by the Dean of Coventry Cathedral, the Very Reverend John Witcombe. Like the Kaiser Wilhelm Memorial Church, Coventry Cathedral is a site that prompts people to think about the past. Coventry Cathedral, as well as the city centre, was bombed in November 1940. Since then, its ruins have become an iconic symbol of future peace and reconciliation, promoting harmony amongst formerly antagonistic communities.

The third speaker of the panel, Dr Silke Arnold-de Simine applied a theoretical framework to the case studies that were discussed, referring to the work of Aleida Assmann, Dominick LaCapra, and other Memory Studies scholars. Then, focusing on the example of the ‘Yolocaust project’, which superimposes selfies taken at the Memorial to the Murdered Jews of Europe in Berlin over footage from Nazi extermination camps, Dr Arnold-de Simine explored the question of a ‘moral compass’ in commemoration. Furthermore, in bolstering her arguments relating to the provocative art project, she discussed the issues of empathy, asking to whom we are willing, or reluctant, to extend our empathy.

The final presentation was given by the sculptor and carver, Charles Gurrey. He questioned the relationship between a specific place, material, and text in commemoration. Using three examples from his own artwork, he showed different ways in which text can be made to work for memorial places. First, in the case of the Bletchley Park ‘Monument to all who served’, text works as an image. The second example was a memorial to Wilfred Owen at Ripon Cathedral, during which Gurrey highlighted the problem artists may face in terms of how to get complex words and quotes from Owen, and other poets, to work on monuments in a non-clichéed way. The final example was an ongoing memorial to honour Tiverton’s war dead, via which he illustrated the struggle to find text which is not clichéed, is honest, and works well with the specific monument as well as the place.

You can watch the four panellists’ presentations on our podcast series.

DPhil candidate in Social and Cultural Anthropology, University of Oxford 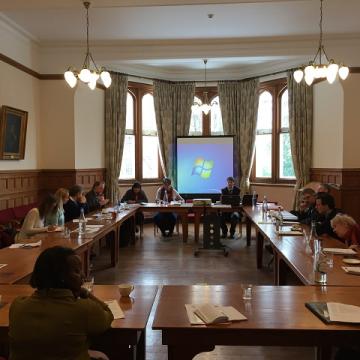