Greek Culture in the 1960s - A Case of Metamodernism?

Having the chance to take part in the Modern Greek Studies in the 21st Century network on January 31 and February 1, 2020, allowed me to present my research on the cultural production of the 1960s in Greece in front of a varied and wide audience for the very first time. It has been an extremely valuable and fruitful experience for an early scholar like me – sharing my research questions with other doctorate colleagues and professors offered new perspectives on my work and the dialogue that this event started definitely shaped the way I am carrying out my research.

The paper I presented at the conference focused on the particular cultural dynamic in 1960s’ Greece and investigated the role played by the modernist models in this context. I then explored the possibility to look at this moment of Greek culture through a new lens, that is the concept of ‘meta-modernism’, which I understand in this particular context to mean the cultural attitude of engaging with modernism in order to express a feeling of in-betweenness, of a constant social, cultural, and political tension between different poles.

Working on the 1960s is undoubtedly quite challenging as it is a complex moment both in Greece and in the world in general. Cold War, the 1968 student protests, and the Chinese Cultural Revolution are only a few events that come to mind when we mention the 1960s, and they already give a good indication of the complexity of this decade. Greece was certainly no exception: on one hand, it was historically a very unstable decade – let’s think of the opposition between Karamanlis and Papandreou, the political murder of Grigoris Lambrakis, the tense relations between Papandreou and king Constantine II, and finally the establishment of the Colonels’ dictatorship. On the other hand, though, Greek culture thrived and flourished, profiting from the new impulses brought to Greece by young intellectuals who during the 1940s and 1950s lived abroad and imbibed the cultural vibrancy of cities like London and Paris.

My exploration of the 1960s and of the culture of the time begins in 1962 with two specific personalities of this period: Nanos Valaoritis and George Seferis. Nanos Valaoritis, who had just returned to Athens after many years spent between London and Paris, decided to collaborate with other intellectuals to set up a new journal and give new impetus to Greek culture. He not only strove to gather the avant-gardist authors of his generation, but he also reached out to the so-called Generation of the Thirties, the older group of intellectuals that had appeared and established themselves 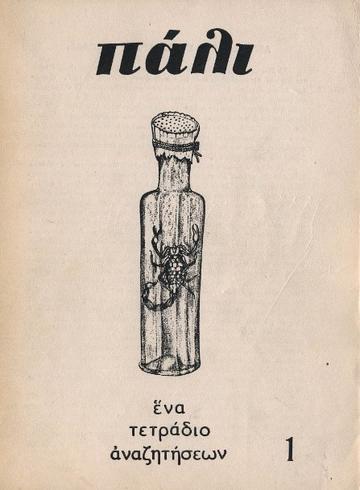 throughout the 1930s. In the year leading to the first issue of his new journal Πάλι in 1963, Nanos Valaoritis held an intense correspondence with George Seferis, trying to convince him to contribute to this project of his with some of his works. According to Valaoritis, “the best writers of our literature have been missing in the last years and everywhere the mediocre and the bad ones have been dominating [...] The new generation has to feed on the best there is” (Valaoritis and Seferis 2004: 169, my translation). This quote clearly shows the important role still assigned to Seferis and the Generation of the Thirties in the 1960s. The exchange between Nanos Valaoritis and George Seferis brings to the surface the twofold dynamic underlying the cultural system of 1960s Greece.

In my view, a pivotal element that emerges here is the persistence of the modernist models provided by the intellectuals of the 1930s. Although the Second World War had interrupted the joint efforts of those intellectuals and pushed each of them to continue their work individually, their literary production did not stop; on the contrary, in the 1950s and especially during the 1960s, the members of the Generation of the Thirties were still particularly active and produced some of their finest works, strengthening their position in the Greek literary field. Indeed, it is in 1963 that George Seferis was awarded the Nobel Prize. Odysseas Elytis, on the other hand, published his masterpiece Το άξιον εστί in 1960, while Yannis Ritsos composed throughout the 1960s most of the monologues that would constitute his Τέταρτη διάσταση. This is also a decade in which novelists who belonged to the 1930s so-called School of Thessaloniki produced their most modernist works; this is especially true of Nikos Pentzikis and Stelios Xefloudas.

While the Generation of the Thirties flourished and gained recognition, the younger group of intellectuals that had emerged after the 1940s (Nanos Valaoritis was one of them) established an open dialogue with the intellectuals of the 1930s, thus creating the cultural vibrancy of the Greek Sixties. In one of his letters to Seferis, Valaoritis mentions that the cultural innovation he envisioned needed not to be limited to poetry and novels, but to be a diffused effort encompassing different genres and art forms. Literature, cultural criticism, cinema, theatre, music – the engagement with modernist tropes and authors spread throughout all fields of cultural production. Examples span from Kostas Tachtsis and his prose to George Savidis and the rediscovery of Cavafy’s poetry; from Mikis Theodorakis and the merging of popular music and modernist poetry to Takis Kanellopoulos’ modernist cinema and the theatre of Karolos Koun.

Despite being seemingly very different, all these strings are deeply interconnected. Together, they created a new cultural language that recovered the modernist archive and adjusted it to the contemporary concerns. However, there currently seems to be a lack of an analytical framework that would permit a comprehensive analysis linking such (seemingly) unrelated cultural moments. And it is in order to fill this void, that I introduce the lens of metamodernism.

I adopt the concept of metamodernism from the current debates on modernism in English Studies, even though these debates focus on the twenty-first century. The interpretations and the uses of this term are still quite fluid and diverse, but the common denominator can be found in the constant dialogue of contemporary literature with the models and the tropes of early-twentieth-century literature as well as the postmodern sensibility. When I apply metamodernism to the Greek context, I particularly draw from the definitions provided by Andre Furlani (2002), Timotheus Vermeulen and Robin van den Akker (2010), and David James and Urmila Seshagiri (2014).

In Andre Furlani’s reading, the prefix meta-, which “denotes the continuity apparent in the metamodernists’ efforts to succeed the modernists”, indicates an aesthetic developed ‘after’ and ‘by means’ of the modernists. The metamodernist relationship to modernism “goes far beyond homage, toward a reengagement with modernist method in order to address subject matter well outside the range or interest of the modernists themselves” (Furlani 2002: 714).

One of the most relevant studies on the subject is Timotheus Vermeulen and Robin van den Akker’s 2010 essay “Notes on Metamodernism”, in which they discuss the end of the postmodern in favour of a new metamodern sensibility. In their view, metamodernism indicates an aesthetic that oscillates between different modernist and postmodernist poles, such as enthusiasm and irony, totality and fragmentation. It should be “conceived of as a ‘both-neither’ dynamic. [It is] at once modern and postmodern and neither of them” (Vermeulen and van den Akker 2010).

Finally, according to David James and Urmila Seshagiri, we are currently witnessing both an appropriation of modernist aesthetics, such as non-linearity and interiority, and a proliferation of fictions narrativising the creation and the reception of modern art and literature. Thus, metamodernist contemporary writers perceive modernism as “a historical antecedent, a cultural trope, and an archive of stylistic and technical possibilities” (James and Seshagiri 2014: 93).

These current debates on metamodernism seem to me to be particularly crucial in my reading of the cultural practice that dominated Greece in the 1960s. A close look at the prefix meta-, which carries the three fundamental meanings of the original Greek preposition μετά, reveals how and why.

Firstly, the preposition is used to indicate instrumentality, ‘by means of.’ Metamodernist works, in fact, actively engage with the modernist archive. Throughout the 1960s, writers and artists returned to modernist practices, such as the concern with temporality and with the individual, in order to attempt to explore what it means to be Greek in a highly ideologically divided country. On the other hand, using modernism not only implicates the appropriation of techniques and the cultural implications they carry, but it also entails, in the case of younger authors, the direct collaboration with the modernists of the Generation of the Thirties and the School of Thessaloniki, as well as the direct reference, if not even incorporation, of modernist works in their metamodernist works. As we saw with the correspondence between Nanos Valaoritis and George Seferis, the metamodernist attitude of the 1960s brought cultural producers not only to work with the texts of the Generation of the Thirties, but they also felt a need to work with them.

The prefix meta- has also a temporal hue, indicating posteriority. As an aesthetic that comes after modernism, in the case of Greece, this also indicates a later stage of Greek modernism. The Second World War, at the same time, brought about a change in aesthetics and sensibilities, disrupting the modernist mission of cultural renovation. Hence, we can talk of metamodernist – instead of modernist – trends appearing already in the 1940s and spiking during the 1960s, when the engagement of younger intellectuals with the modernists of the 1930s became more consistent.

Lastly, meta- denotes an intermediate position, meaning literally ‘between’ two elements. The feeling of being situated between different poles, or even at the periphery of Europe, was already central in Yorgos Theotokas’ famous essay Ελεύθερο πνεύμα, published in 1929, where he invoked for an active engagement of Greek intellectuals with the 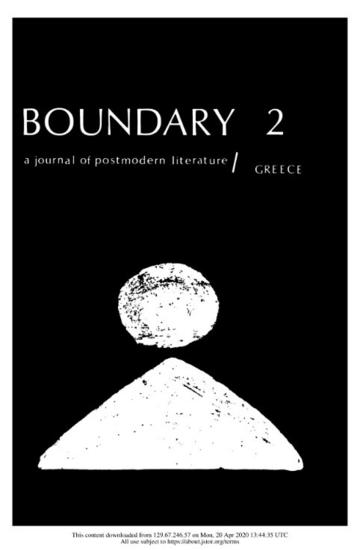 cultural innovations of Western Europe in order to renovate the Greek letters. This significant essay certainly played a role in the development of modernism in Greece in the following years. The feeling of in-between-ness intensified with the intervention of the Civil War, permeating the literary output up to the 1960s. In 1961, in fact, Zissimos Lorentzatos published Το χαμένο κέντρο, an important essay on George Seferis and his poetics. Already the title is indicative of the feeling of loss that was felt in Greece among the intellectuals – according to the author of the essay, Greek literature has lost its true cultural references when the modernists turned their attention from the Eastern tradition to the West. The two poles, West and East, constituted a tension in the 1960s, which intellectuals navigated in the attempt to bridge these two elements. More than a decade later, in 1973, the sense of liminality of Greek culture was reprised in a more positive tone by the American-Greek scholar William Spanos in his journal boundary 2, on a special issue on Greece and the then rising idea of postmodernity.

Between Lorentzatos and Spanos, the 1960s unfolded, together with a whole range of oppositions and tensions that metamodernism can help uncover. Vermeulen and van den Akker introduced in the debate on metamodernism the concept of “oscillation” between numerous poles pertaining, on one side, to modernism and, on the other, to postmodernism. The application of this principle to 1960s Greece multiplies these poles, transcending the categories of modernism and postmodernism, and certainly that of post-war culture. Meta-modernism is then the intellectual condition of a country that swings back and forth on a field of political and cultural forces, constantly on the ‘boundary,’ as William Spanos would have said.

As a conclusion, some basic questions arise – questions that are guiding my current research on Greek modernism and the Greek 1960s: Could it be metamodernism that became the dominant mode of the Greek 1960s? And finally, could it be metamodernism that created the very conceptual (and at times, generic and critical) space in which people like Nanos Valaoritis and George Seferis, as well as many other Greek cultural producers (composers, painters, film directors, critics) can be reviewed together, in the context and within the cultural matrix of the Greek 1960s?