As part of this week’s #TORCHGoesDigital! theme of Storytelling, the TORCH Heritage Programme is taking the opportunity to celebrate this ongoing project that has not only revealed the lost history of one of the most noticeable Oxford monuments, but has also tackled research topics such as built heritage preservation and perception, while investigating ‘built heritage services’ with focus on bio-receptivity, diversity and well-being. The project is being carried out by the Oxford Resilient Buildings and Landscapes Lab (OxRBL) with funding from the Oxford University Diversity Fund and van Houten Fund, KE SEED Fund and the Heritage Seed Fund.

The 17 stone-carved Heads guarding the perimeter of the Sheldonian Theatre and the History of Science Museum on Broad Street are an iconic feature of Oxford – and yet, a great deal of mystery surrounds them.

The current Heads are already the 3rd generation with the 1st set dating back as far as 1669 and the 2nd set to Victorian times (1869). Despite their historical and cultural value, the first two sets of Heads were never fully recorded and their whereabouts remained largely unknown. Our team of ‘head hunters’ from the School of Geography and the Environment has been piecing together the story of the Broad Street Heads. Many of the missing Heads (or what remains of them) have been rediscovered through digging in the archives and with help from the local community and a wealth of fascinating new information has been found.

The 1st set lasted for about 200 years whereas the 2nd set became so badly weathered that only 57 years after their installation John Betjeman described them as “mouldering busts”, “unknown bearded guards” and compared them to “illustrations of skin diseases in a medical textbook”.

Understanding the remarkably different weathering responses is one of the many objectives of the ‘The History and Mysteries of Oxford’s Broad Street Heads’ project. The project evolved into three interrelated projects informing each other and tackling research topics such as built heritage preservation and perception, understanding decay mechanisms, conservation histories, and investigating extended ‘built heritage services’ with focus on bio-receptivity, diversity and well-being. All three strands are accompanied by respective outreach activities and public engagement.

‘The History and Mystery of Oxford’s Broad Street Heads’ project exemplified the breadth of Heritage Science in a 2-month exhibition in the Weston Library (2019). The exhibition covered a range of topics including the environmental history recorded by the Heads, their meaning and heritage values, and their contribution to the literary and artistic history of Oxford. 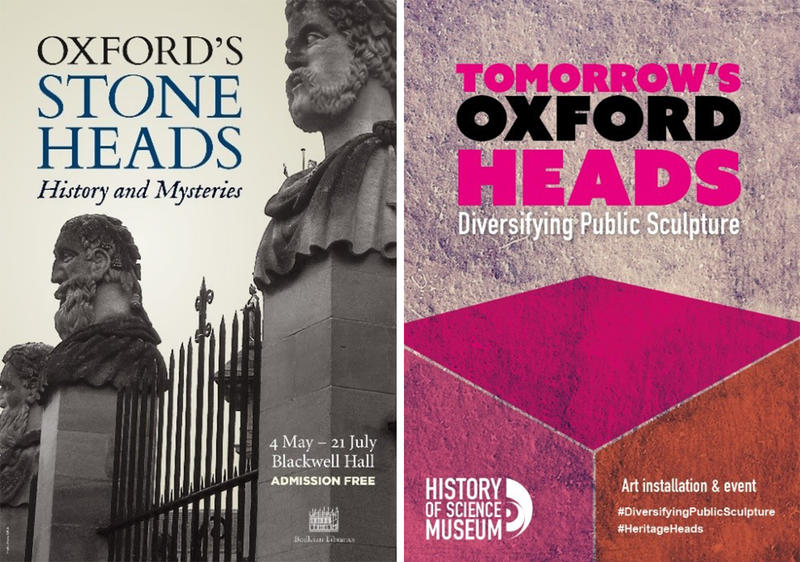 This naturally led to the ‘Tomorrow’s Oxford Heads – Diversifying Public Sculpture’ project, an artistic collaboration between the School of Geography and the Environment and the History of Science Museum. The aim of this project was to enhance the visibility of women and underrepresented groups in the University of Oxford in its externally-facing public sculpture. We commissioned two temporary art installations as a way of eliciting views from people about what 21st century sculptures should be on display to reflect the diversity of today’s University. The sculptures themselves functioned as a vehicle for public consultation by inspiring written and drawn public responses. This project has recently been shortlisted for the VC Diversity Award.

a: “The Pink Head” one of the two temporary set of sculptures of the Tomorrow’s Oxford Heads – Diversifying Public Sculpture project in front of the History of Science Museum (© OxRBL 2019); b-d: “The Pink Head” and public engagement (© Ganymoney 2019; ) 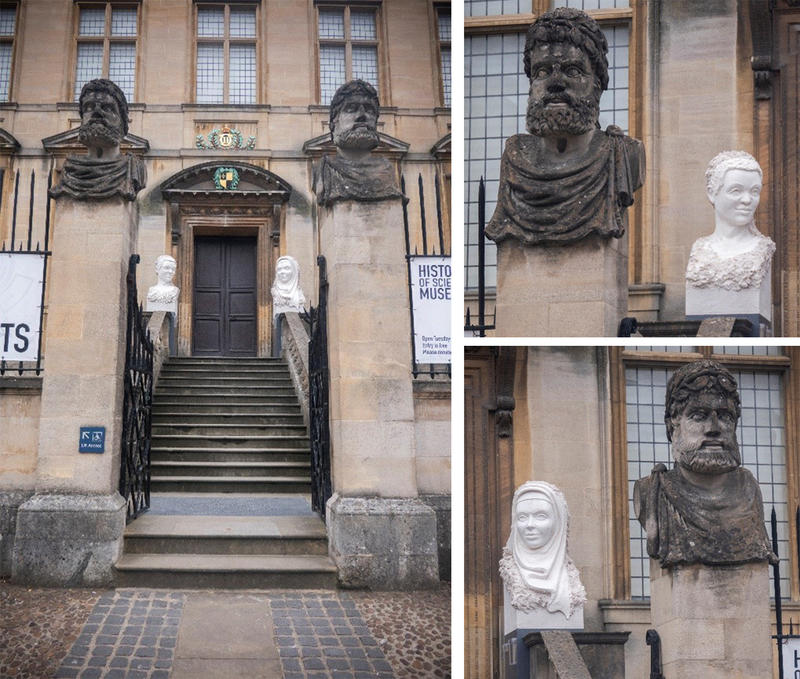 General view and close-ups of one of the two temporary set of sculptures of the 'Tomorrow’s Oxford Heads – Diversifying Public Sculpture' project in front of the History of Science Museum. Two gypsum busts made by Alex Wenham mirroring the shape and size of the historic Broad Street Heads, but adding to the canon of values such as BAME and gender equality (© Keiko Ikeuchi)

The investigation into extended ‘built heritage services’ has informed a follow-on project funded through the Inspiration Fund at the School of Geography and the Environment: ‘Oxford’s stone built-heritage as a proxy for historical air quality’. This project aims at building up a chronology of Oxford’s air pollution history analysing trace elements in the weathering crusts of the Sheldonian Head sculptures. The results could have future implications for the development of healthy and sustainable cities, where stone sculptures may act as visible monitors of pollution.

We are hosting a Heritage Heads webpage at the School of Geography and the Environment with online resources such as videos and news coverage here.

The 'Histories, Mysteries and Future of Oxford's Sheldonian Heads' project carried out by the Oxford Resilient Buildings and Landscapes Lab (OxRBL) has been successful on many levels and is still ongoing. This would not have been possible without funding including the Oxford University Diversity Fund and van Houten Fund, KE SEED Fund and the Heritage Seed Fund.

Katrin Wilhelm is an early career researcher at the School of Geography and the Environment and member of the Oxford Resilient Buildings and Landscapes Lab. Her research focusses on cultural rock and stone material responses to the natural and anthropogenic environment. The aim is to understand and mediate weathering processes. A further dimension of the mediation is to explore the effects of types (including critical heritage studies) and changes (e.g. decay, loss, reclaim) of urban built heritage on people’s wellbeing. Besides research, a substantial part of her time is dedicated to public engagement with research and other outreach activities, supervising research in science for heritage and geography, and undergraduate teaching. 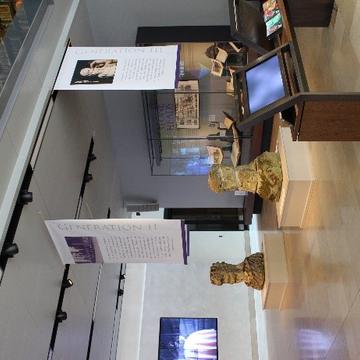