The 9th February witnessed the first in a series of exciting new interdisciplinary lectures which aim to celebrate the collaborative partnership between the University of Oxford’s Humanities Division and the National Trust. This first lecture, entitled ‘History, Vision, Ambition’, brought together Dame Helen Ghosh, Director-General of the National Trust, and Professor Karen O’Brien, Head of the Humanities Division, to discuss the challenges and mutual benefits associated with the partnership, as well as the ways in which the University of Oxford and the National Trust can work together.

The first of the evening’s speakers was Dame Helen Ghosh, who opened up the discussion by taking us on a tour of the National Trust’s aims and objectives throughout history, before describing the challenges and difficulties facing the Trust as it looks towards the future. Since its inception in 1895, the National Trust has always sought to stay true to its founding principle: to promote the preservation of places of historical interest and natural beauty for the benefit of the nation. From the acquisition of the first lands and properties by the Trust in the early twentieth century, to the preservation of more ‘working-class’ sites in the 1990s, the National Trust has always been wholly committed to confronting the preservation challenges of the day, so that the UK’s natural and historical heritage can be enjoyed by everyone.

Indeed, looking to the future, Dame Helen’s vision for the National Trust remains faithful to the central principles of its mission. With new challenges such as climate change and threats to biodiversity, Helen believes that the aim of making the natural landscape accessible to all is of greater importance than ever. Through increased work with local governments and initiatives such as Heritage Open Days, Helen hopes that the National Trust will continue to support local heritage as well as ensure its spaces are enjoyed by everyone.

Finally, Helen spoke of the importance of the alliance with the University of Oxford in helping to realise this aim. The partnership with humanities scholars will furnish the National Trust with creditable scholarly research which can be repackaged and presented in a way that will engage the many faces of the public. A significant challenge, of course, lies in how to make such scholarly research accessible to non-academic audiences and to National Trust visitors. Helen then nodded to the importance of Trusted Source – the National Trust’s Knowledge Transfer project with Oxford University – which is endeavouring to bring the fruits of scholarly labour to non-specialist audiences in the form of concise and inviting digital articles. Helen concluded with confidence that ‘Oxford University and the National Trust must stand together.’

The second speaker – Professor Karen O’Brien, Head of the Humanities Division at Oxford– spoke about the ways in which the partnership with the National Trust can be of benefit to academics. Despite certain ‘epistemological differences’ between the heritage and academic sectors – and the different ways in which these two sectors define and measure their ‘impact’ – Professor O’Brien emphasised the importance of continued collaboration with external partners such as the National Trust, and argued that such innovative partnerships and knowledge exchange initiatives would ultimately assist the humanities in its purpose of taking an exploratory attitude towards the past and the present.

Professor O’Brien then talked about the language and phraseology of the term ‘knowledge transfer’. Despite the suggestion of one-sidedness inherent in this term (that knowledge is transferred uni-directionally and only one partner will benefit from the transfer of knowledge) Professor O’Brien emphasised that the essence of the collaboration is mutually beneficial, and that both Oxford and the National Trust will benefit from the partnership.

Questions from the audience were centred chiefly on the issues of accessibility and diversity, and in particular on the challenge of attracting a greater array of visitors to National Trust properties. Helen Ghosh acknowledged that in certain regions of the UK the diversity of the National Trust’s staff did not reflect the cultural diversity of the location, and suggested that greater diversity in staff may have the effect of attracting different demographics from the public.

A question was also raised about entry costs being the greatest impediment to wider access. Helen responded to this by pointing out that costs such as these are unavoidable as the Trust does not generate enough income through its land alone to meet the regular expenses of conservation and maintenance. Helen also mentioned that, according to market research, economic factors such as entry fees do not deter visitors; rather certain prevailing presuppositions – like the idea that National Trust properties will be boring – act as a greater deterrent to potential visitors.

The next lecture in the MOVING, TEACHING, INSPIRING series is at 5.30pm on Thursday, 23rd February 2017, St Luke’s Chapel. Full details here. 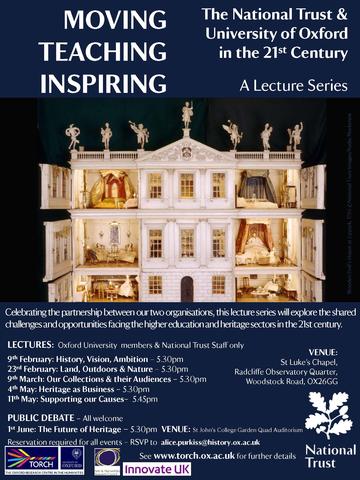