Is PrEP a Queer Technology?

Chase Ledin is a PhD researcher at the University of Edinburgh. His thesis examines the queer temporalities of ‘negotiated safety’ as practised in gay male sexual communities during the 1990s and 2000s. This blog post asks: Is PrEP a queer technology? By posing this question, Ledin argues that we can look at new intervention tactics as strategies that enable ‘possible pleasures.’

HIV prevention workers speak frequently and insistently about the toolbox. The toolbox refers to the multiple options for preventing HIV transmission, including condom use, antiviral drugs, partner selection, and position sorting (e.g. top/bottom). It has a long and contested history. First integrating the condom[i] and then advancing to effective drugs to suppress the virus,[ii]the HIV toolbox has become a way of life for many gay men and mandatory knowledge for most sexually-active individuals. For queer communities today, the toolbox represents a form of ‘medical monolith’ that has both historical resonances and contemporary imperatives.

The toolbox speaks to broader concerns of queer ‘community health’. It is regularly spoken about in popular queer media. For instance, as Patrick Kelly’s recent op-ed in the New York Times suggests, the introduction of the new technology, PrEP, may not easily fit into the broad, traditional goals concerning queer community health.[iii] The introduction of pre-exposure prophylaxis, or PrEP,[iv] Kelly argues, may encourage a long-disputed and potentially disinhibiting choice: sex without a condom. For Kelly, PrEP revalues the condom as a secondary measure beneath ‘naked’ or ‘carnal’ pleasures. Free from the fear of HIV transmission, he suggests, gay men using PrEP can ‘revert to their carnivorous sexual selves.’ In turn, Kelly contends that the medicine’s 98% efficacy might lead gay men to sexual practices (full of STIs) once explored in some pre-AIDS landscape. As this logic suggests, PrEP conflicts with the condom because it allows for the re-emergence of some ‘carnal’ and ‘historical’ pleasure practices. It makes an utter mess of the toolbox.

However, Kelly’s reading relies upon a vision of the past (and a lot of misread statistics) that misunderstands the plurality of the toolbox and its relation to pleasure. I want to resist this uncritical reflection of sexual history, the warping of sexual prevention tactics, and especially the distorted periodization of queer desire. Drawing from Michel Foucault’s conception of ‘technologies of the self,’[v] I want to ask: How is PrEP a queer technology? This question seeks to understand how PrEP fits into the HIV toolbox--as a means to enhance the self and its pleasures--before assigning historical resonance. Pre-assigning PrEP to the toolbox acknowledges the lived necessity of this technology. This question also seeks to locate ‘possible pleasures’ within the toolbox. By assuming that PrEP is a legitimate, safe and pleasure-producing tool (employed as part of a comprehensive toolbox), we can understand how PrEP queers sex.

I want to briefly outline three ways in which PrEP is a queer technology and thus queers sex. First, PrEP provides more options. Against the specificity of the latex condom,[vi] PrEP furnishes choice for multiple (a)genders. This once-a-day pill[vii] empowers HIV-negative individuals of all (a)genders by locating prevention in a regular and conscious action. Taking this pill builds resistance to potential infection regardless of (a)gender identity and gives agency to the individuals who participate in sex. From here, the condom (male and female in form) enters as an additional and informed choice to decrease viral and bacterial infections. It supplements the choice of pre-signified safer sex via daily pill. In short, prevention as a pill (PrEP) makes sex more accessible for multiple (a)genders; it is an active thought before and in anticipation of sex.[viii]

Secondly, the multiple (a)gender discourse shifts significance from ‘at risk’ populations to conversations about the ‘use,’ ‘potential,’ and ‘possibility’ of pleasure. As HIV prevention scholar Kane Race argues, the controversy over PrEP ‘speaks to how condoms have served to manage communal anxieties about sexual pleasure and sexual risk in the era of AIDS’.[ix] For Race, PrEP ‘involves acknowledging to oneself and to others that one’s practices are not as safe as they could or “ought” to be’.[x] Such a technology names the widespread anxieties of ‘unbridled homosexuality’.[xi] PrEP provides a spotlight on those ‘risky’ desires typically measured against the condom. PrEP deepens the dialogue in queer community health wherein individuals can disclose their desire for many kinds of un-prescribed sex, including condomless sex. That is, individuals can vocalize their desire to have non-procreative and recreational sex that is centred on ‘possible pleasures.’ In other words, PrEP is a ‘pleasure consuming medicine’[xii] that enables critical engagement with sex as pleasure; it opens conversations in queer community health to moments of pleasure involved in the toolbox.

Finally, PrEP doesn’t prevent STIs but it does prevent HIV. This is an important fact to reiterate. Until its wider UK circulation starting in 2017,[xiii] prevention tactics have focused heavily on treating HIV after infection. PrEP is a pre-emptive technology. This means that anxieties about transmission change fears of ‘the inevitable’[xiv] to prophylactic management for all. Far from the dread of super STIs, PrEP requires (1) knowledgeable status disclosure, including awareness of STIs, (2) regular sexual health check-ups and treatment if necessary, and (3) a more scientific measurement of sexual practices and the reasons people engage in condom use, condomless sex, non-penetrative sex, etc. Requiring critical awareness of the self, PrEP queers sex by proliferating sex-talk among partners, practitioners, clinicians, and scholars. PrEP is a technology of the self that provides an opportunity to discuss forms of sex beyond procreation and outside of monogamy. It requires a radical engagement with multiple sexual identities, (a)genders, statuses, risk potentials, and practices in an increasingly time specific and manageable sexual landscape, especially for those who actively eschew condoms and those who seek possible pleasures in the toolbox.[xv]

The toolbox may not be widely accessible globally, but it does provide promise, initiative, and possibility for those who can access its multiple technologies. I have attempted to briefly outline three ways in which these technologies can queer our opinions about sex. In particular, PrEP provides options across multiple (a)genders, opens up a dialogue about pleasure and safety, and standardizes awareness of STIs and community health. PrEP is a queer technology because it proliferates sex-talk. This is not only because it is a sexual-health tool; it also enables a new sense of possibility to take up pleasure in different and enjoyable ways. If we actively take up PrEP’s queer potential, assuming its lived necessity and pleasure potential, we will shape ourselves as an intensely knowledgeable and healthy community. In this, our sexual positions and pleasures are not ‘unbridled homosexuality’ in a moral register. Instead, our pleasure is informed, thoughtful, and reflexive practice. PrEP is an exercise in engaging playful, exciting, and safe sexual encounters.

Crossley, Michele, ‘Commentary: How to Use a Condom: Narratives, Sexualities and Moralities in Safer Sex Health Promotional Literature,’Culture, Health and Sexuality 3.3 (2001), pp. 363-70.

France, David, How to Survive a Plague: The Story of How Activists and Scientists Tamed AIDS (London: Picador, 2017).

Odets, Walt, In the Shadow of the Epidemic: Being HIV-Negative in the Age of AIDS (London: Cassell, 1995).

[i] David France, How to Survive a Plague: The Story of How Activists and Scientists Tamed AIDS (London: Picador, 2017).

[iv] HIV-negative individuals take PrEP to preemptively reduce the possibility of HIV transmission. PrEP is composed of a series of drugs already active and tested in HIV-positive antiretroviral medicines.

[vi] Michele Crossley, ‘Commentary: How to Use a Condom: Narratives, Sexualities and Moralities in Safer Sex Health Promotional Literature,’Culture, Health and Sexuality 3.3 (2001), pp. 363-64.

[xiii] PrEP is not widely accessible to all individuals in the UK. It is screened and provided for free through NHS Scotland, but it is not yet available via NHS England or NHS Wales.

[xiv] Walt Odets, In the Shadow of the Epidemic: Being HIV-Negative in the Age of AIDS (London: Cassell, 1995). 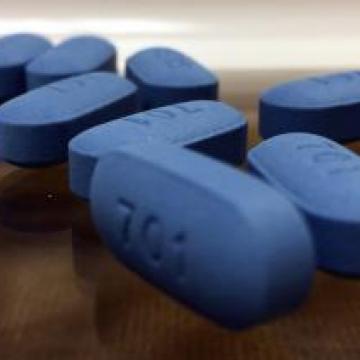