You may have heard that Love Island is a travesty for today’s feminists, or that it is ‘dumbing down’ its viewers, but last week the Women’s Studies MSt cohort hosted a panel on Love Island that demonstrated its value for many types of inquiry, feminist among others. It is a show of our times, whether we like it or not, and it has raised many questions across its 6 series, many of which we addressed in “Love Island: feminism, postmodernism and late capitalism”.

On a dreary afternoon in late January, 160 students, feminists, and Love Island fans filed into the imposing East Writing Schools. Usually overlooked by a host of old white men, immortalised in portraits and hung on the walls for posterity, the room instead was warmed by the glow of a massive Love Island poster: the dissonance could not have been greater.

Over the next two hours, as we heard poetry readings, listened to Denise Bonetti and Livia Franchini share their thoughts and research on the topic, and opened up the floor for discussion, one couldn't help but think that Love Island, as far away as it seems from Oxford, and its place in our wider culture was not only a pertinent discussion to be having, but a necessary one.

We talked about how Love Island encapsulates our age of über-surveillance, as we are moving towards an increasingly highly sophisticated surveillance system which in turn effects the way we interact and communicate. Spaces of love are increasingly spaces of capital, and as such spaces of intimacy are becoming more performative and more transactional; one has to look no further than Tinder to see this in practice, but it is also encapsulated perfectly in the mechanisms of Love Island.

The panelists also touched on the tensions in narratology present on the show: how the ‘characters’ are under total surveillance from the outside world, yet have no contact to it: the fact that this show is fundamentally postmodern in its production but that it presents non-postmodern content in its familiar storylines and narrative tropes based on unity of character: the highest valued asset on the show is ‘truth’. The greatest tension, perhaps, is that the contestants are both real and fictional: we know that they are playing characters, often based on previous contestants; we don’t believe that anyone goes in for love, as we know that they know going onto the show achieves visibility and that it is a failsafe entrance into the world of showbiz; and we know that their experiences are highly edited to curate these characters and their storylines. The show is full of these dichotomies, both real and fictional, both heavily misogynistic and a place for feminist inquiry; we know that as viewers we have to fill in the gaps in the narrative, and that the questions it raises have importance outside the parameters of the show.

Bonetti and Franchini co-edited 'On Paper', a poetry anthology inspired by Season 4 of ITV's Love Island. To say that there is an irony in producing a poetry anthology, a form of literature that can be considered emblematic of high culture, on Love Island, a tv show which has been accused of embodying the very worst of our current culture, would be missing the point. One of their central concerns is this very distinction between high and low culture, and this anthology was an attempt to problematise the differentiation between the two. As well as fans of the show, they also view it as fertile ground for conversation: they believe that we must take items of pop culture that draw huge attention into account; there is a huge range in the perspectives of people watching the show, which means it is a productive source of conversation in ways you would not particularly expect. They wanted their selection of poems to pose a question, not  necessarily provide an answer.

Of course, there are many problems with Love Island, such as the damage done by the centrality of heteronormativity to the show, its promotion of a specific type of beauty, and the fact that many contestants struggle with mental health issues and bullying once they arrive back in the ‘real world’. Franchini even questioned whether the show has had its time for this reason, and whether, although it had raised some productive questions and lines of thinking, it could be of any more service to us now.

However, as we engaged with this panel on one of the most controversial shows of our time, I thought about how Love Island and Oxford, despite their myriad differences, were perhaps more similar than they first appeared; they are both spaces with specific entry requirements and as such inaccessible to many, there is contention about whether they should have a place in our current society, and, fundamentally, they both are viewed as being disconnected from the ‘real world’. This disconnection is paramount to both their idealisation and to their criticism, and, to this end, it seems vital that we do consider the place of both Love Island and Oxford in our current society. Although both are sometimes seen as obsolete, they are both, for now, mutually beneficial spaces to reflect not only on questions of feminism, postmodernism, and late capitalism, but also our wider cultural values. 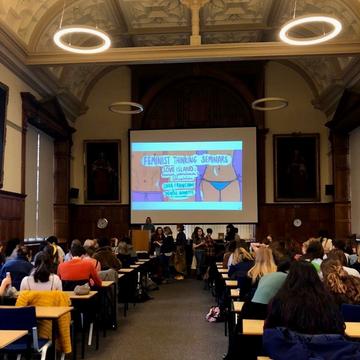