How did scientific and religious ideas about plant-life merge in the poetry of German writer Annette von Droste-Hülshoff? What was the significance of gardens and wetlands in her poems and in the collective imagination of the mid-nineteenth century? Can we find traces of proto-environmentalist thinking in Droste-Hülshoff’s depiction of the interaction between human and non-human nature?

On 11 June, the SciPo TORCH Research Seminar got together to explore the significance of plant imagery in the spiritual poetry of Droste-Hülshoff, which was written in the early 1840s and provides us with a fascinating insight into poetic imagination at the intersection between science and faith.

The poem ‘The Lost Paradise’ (1845), a retelling of Genesis chapter three with an ecological twist, is exemplary in this respect. Focusing on Eve in the Garden of Eden just before she fully succumbs to temptation, Droste-Hülshoff depicted an idyllic and ideal natural setting that slowly turns into a fallen and marred one through the influence of misguided human desire. Eve’s fantasies of forbidden knowledge are shown to be the catalyst bringing forth this change in nature – as she dreams, the colour of her cheeks leaves her face and seeps into the roses that surround her, turning the blossoms from prelapsarian white to red and making thorns grow along the branches. The traditional Christian symbolism of roses and thorns was enriched by Droste-Hülshoff by her knowledge of contemporary biological discourses concerned with the interconnectedness of plants, animals and humans. Keenly interested in new scientific discoveries and familiar with Lorenz Oken’s cell theory, Droste-Hülshoff’s poetry often depicted humans embedded in environments involving flowers, mosses, bodies of water, rock formations, foxes and birds in reciprocal relationships. ‘The Lost Paradise’ is no exception: Eve’s dream alters the natural world that surrounds her instantaneously, drastically and on a quite physical level. Taking the cultural context of the mid-nineteenth century into consideration, the poem, aside from the theological significance of nature being corrupted by human sin, seems to make a further point. The times of Droste-Hülshoff saw not only the emergence of an unprecedented scientific exploration of nature, but also, in the wake of industrialization, an extensive exploitation of natural resources like never before. Especially in the German speaking countries, which throughout the first half of the nineteenth century did not acquire colonial territories, the results of this were felt quite directly: Droste-Hülshoff reflected in her writing repeatedly on the vanishing of wetlands through modern agricultural practices or the diminished forests resulting from increased demand for wood.

At the same time as it was drastically altered by humans, the natural world was still supposed to serve as society’s ‘other’, an ahistorical, compensatory realm of beauty and innocence.

It is this presumed duality of nature and society that is shown to be an illusion in ‘The Lost Paradise’. Eve’s dreams and desires quite literally bleed out into the natural world around her, altering it permanently. That the thorns grown by her own fantasy end up wounding her as she cradles a branch of the rosebush to her chest adds yet another dialectical entanglement to the relationship between humans and plants that Droste-Hülshoff depicted, which allowed us to explore the poem as a testimony of proto-environmentalist thinking in the nineteenth century.

Gesa Jessen received degrees in Comparative Literature and Art History from Freie Universität Berlin before coming to Oxford, where she is currently a DPhil student working on the relationship between German literature and the concept of nature in the first half of the 19th century. 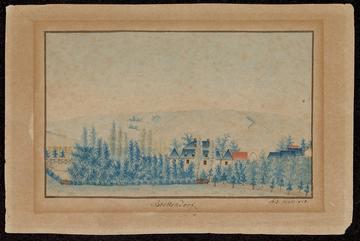