Oxford and Oxford: aligning the university and the community

Oxford and Oxford is a movement which looks to reframe how University-Community dialogue is conducted.

There are three, key problems I see with how Oxford University interact with community partners, and specifically within the realm of collaborative activism, this serves to diminish the productive possibilities of such encounters.

The first regards the weighting of activism as an intellectual exercise, rather than a practical endeavour. A reliable constant on the Oxford landscape is the famed 'panel discussion', which, don't get me wrong, is fantastic in certain situations. However, it should not be assumed that these discussions are universally beneficial; we must begin to consider the configuration of power in these settings, which works to platform certain peoples and silence those who don't engage with its distinctly academic template.

The second issue is the inequality between student and community voices. Neoliberalism impacts activism through the search for 'results' immediately, within a short amount of time. This has had a disastrous effect on activism which requires sustainable strategy and collaborative thinking, two things that entail the investment of time: something we increasingly believe that we do not have. This means that university activism is often a one-way conversation, and to enact sustainable change we must platform community organisations and voices when formulating and deploying activism campaigns.

The third regards the status of community-activists in Oxford. It is often assumed that community-based activists are expendable and exploitable resources. Individuals who work largely voluntarily, juggling jobs and campaigning, are assumed to extend such altruism when interacting with the university. Their work is hugely important and to take a collaborative relationship forward, the very understanding of community activists as resources which should not be exploited must be developed.

To combat these issues, Oxford and Oxford wants to re-frame the terms on which community-university dialogue is conducted, attempting to equalise the influence between the two spheres of Oxford, a relationship which has been historically one-sided.

Deatils of upcoming Community Engagement Workshops can be found here

The Community Engagement Workshops on March 17th will be the first step in this change. At the event, 40 students will have the opportunity to engage with community-based activists. In groups of ten, each student will be involved with a workshop from each community activist, understanding their backgrounds in Oxford, their activism, their achievements, and their planned future work.

The key outcomes from this event are to:

We are hoping to continue work alongside community organisations and university institutions to try and embellish this method of dialogue into the social fabric of Oxford. Moving forwards, Oxford and Oxford wants to equip student and community activists with the networks of communication to make the most out of their skills and abilities.

To find out more about the event, please find it on Facebook or email Shuranjeet.takhar@sant.ox.ac.uk for more information.

Shuranjeet Singh Takhar is a currently reading Modern South Asian Studies at Oxford. As well as this, he initiated the Oxford and Oxford movement, furthering the community-facing work he has conducted in both public and third sector organisations in the past. 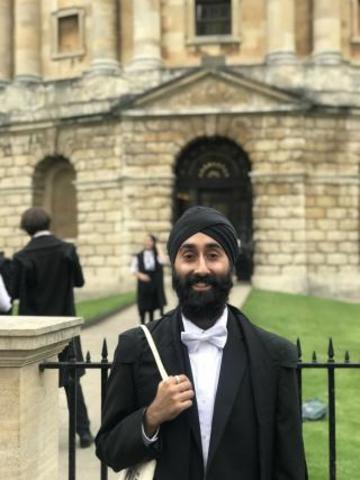