Peter Davidson, from The Lighted Window: Recollecting the Low Countries thirty years ago

The Lighted Window (forthcoming in summer 2021 from Bodleian Library Editions)

So now I remember the long series of afternoon walks which I took thirty years ago with my art-historian friend David Mees, through Leiden, Amsterdam, the Hague. Towards the end of clear autumn afternoons, the narrower streets would already be dark with their lamps coming on, while it was still possible to glimpse the late bright yellow in the sky beyond gables, roof-tiles and spires. We walked endlessly, tirelessly, while he taught me the vernacular of Dutch brick architecture, the shaping of the water-towns of the northern Netherlands. At that time, the custom of leaving windows uncurtained was almost universal, and as a result, he was able to talk me through the interior architecture of the seventeenth and eighteenth centuries as we walked along the patrician canal, the Rapenburg, over the brick paving of the narrow lane to St Peter’s Church, passing on the corner the ancient bookshop called the Templum Salmonis, into the Heerensteeg, over the bridge and down into the quiet side canal of the Vliet, with its regular trees along the water and the yellowing rose briars growing up the neat brick walls of the houses. What an extraordinary succession of rooms presented themselves to us in the lighted windows of early evening: perhaps the most surprising came very near the beginning of the Rapenburg, just past the antique shop with polychrome statues in the window, a mysterious shop which was never open.

Through long windows, the ground floor saloon could be seen, painted around the walls with a continuous view of a formal garden, as though the room itself were a shaved lawn or bowling green, a place where the shadowy alleys of clipped trees converged below an evening sky. There were plain modern desks with lamps in the room, but its strange apartness remained intact, so that the modern furniture looked uncomfortable and transient. The quality of the painting was very high, so that, looking in from the street as the light failed outside, the eye was led down fictive hedged walks, coming to rest by a fountain or half-seen statue. The sporadic illusion created by painted rooms can be disquieting in itself, in this room painted with a maze-like garden especially, multiplying paths and perspectives, feigning shadowy places. I came upon another of the same kind, wandering one spring evening in the streets around Falkner Square in Liverpool, a lighted ground floor window showing a continuous painted panorama above the dado of what must have been a fairly small sitting room: dark trees with a hint of a valley falling away beyond to a river, completely unexpected, wonderful, and strangely in accord with the geography of the real city sloping to the Mersey.

We moved onwards through the old streets in Leiden and past the lighted windows: painted beams lit from below; a ceiling with an oval of dusk-yellowed clouds and swallows in flight; a curving rococo chimneybreast with a panel of doves and flowers. A raised ground floor, up a few steps with a curving balustrade, and a glimpse of verdure tapestry and silver sconces.

Almost always these lighted, beautiful ground floor rooms were empty, as the streets outside were also almost empty at nightfall. Sparse footsteps on brick paving, the rustle of chestnut leaves, leaves turning in the streetlight as they fell to the canal, their yellow stars floating on the black water. Perhaps, in truth, the inhabitants of streets and rooms were simply gathered around tables at the back of their houses, perhaps there would be more people in the streets later on, but the feeling and illusion of that hour were ghostly, as though these fine, lit, unpeopled rooms were anchored insecurely in time. (I felt this if anything more acutely more recently, walking on an autumn evening along the canals around the Prinsenhof in Delft: a feeling of obtrusive hauntedness caused by the sheer emptiness of the streets, the consistent vacancy of the lighted ground floor rooms.)

This same emptiness characterises Gerard Reve’s desolate novel of Holland immediately after the war, The Evenings, with its young protagonist driven out from the family home by devouring boredom, evening after evening. Much of the alienation of Frits van Egters, is conveyed by the very absence of lighted windows, of domestic lives offered to public view, in the anonymous winter city where the novel takes place. He hurries, head-down, through freezing streets to meet with half-indifferent old school friends, inhabitants of underheated, rented rooms. The war is barely mentioned, but their jokes are all narratives of disaster, there are endless small acts of violence against insects and animals, the horror and tedium of war and occupation are clearly only just over. Everybody in the novel is damaged, nobody in the novel talks about the recent past. At one point, on New Year’s Eve, when neither family nor civic community offer Frits any kind of light or comfort, he finally formulates a wartime image for his own loneliness:

“So here I am standing in this darkened doorway,” he thought, “like a spy. What else am I if not a spy? . . . Peering out from darkened rooms into lighted streets. And so it is.”[1]

His image inverts the customary affirmation of community offered by the uncurtained, trusting windows open to the view of the Dutch streets. He hurries to his joyless home, traversing a city emptied by his own misery.

There was a pair of windows in Forth Street at the eastern end of the New Town of Edinburgh which seemed to be loosely anchored in time, offering a momentary glimpse of a different reality beyond. I noticed it particularly not long before nightfall, one evening just before Easter five or six years ago. I was walking towards the junction with Union Street, the lengthening day had just moved into twilight and there were a few lights in the windows – sparse lights on the eve of a holiday in a street of classical stone houses and tenements, which are mostly offices. Then I saw a pair of upstairs drawing room windows which showed a reddish, flickering light – the steep angle looking up from the street disclosed only a triangle of the fireplace wall, but I could see that there were six candles lit on the mantelpiece of what seemed otherwise an empty room – no pictures and no curtains, shutters open, the panes of glass in the window very clean. The effect was oddly memorable – another instance of the unknowability of upstairs city windows – as if that apartment were occupying a different epoch from the rest of the darkening street.

Two years later, after dinner in Oxford, on a rainy night at the ragged end of winter, I fell into conversation with a postgraduate philosopher from India who had studied in Edinburgh – I think he said that he was the sixth generation of his family to go to school and university in Britain. It emerged that he had lodged as a student towards the eastern end of the New Town, and that he had walked much about the city by day and night, so I asked him if he had ever noticed anything in Forth Street. He said that he had often thought how strange it must be to be one of the few residents in a street of offices – “and then there were those windows with the flickering light.” He too had noticed them on many occasions, had tried various narratives over in his mind to account for them, had even once thought of trying the main door and  going up to ring the doorbell of the flat, but had decided in the end that he preferred not to know. This minor mystery added to the enchantment of a city of regular, even monumental facades concealing fine, fantastical rooms, like the delicate trompe l’oeil rococo panelling in the ground floor drawing room where Nelson Street dog-legs into Northumberland Street, visible only at twilight in the ten minutes before the shutters are closed against the night and the north wind off the Forth. 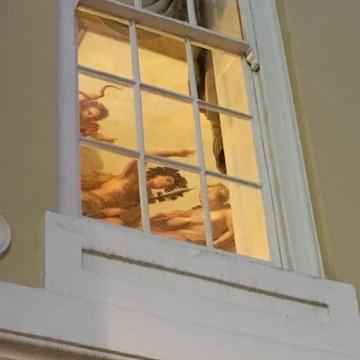