Alex Grindley is an undergraduate currently studying for a BA in Classics at Worcester College, Oxford. They hope to pursue postgraduate study and have a particular interest in the study of visual and material culture. In this post, they investigate how Derek Jarman’s film Sebastiane interrogates the reception of the Classical world and attempts to create new queer narratives of the past. This blog post is adapted from an article written for the Alexandria Undergraduate Classics Journal.

‘Jarman strove in his work to invent new ways of seeing and of representing the relation between the past and the present, of exploring the ways in which history inhabits and informs the present’[1]

Derek Jarman's 1976 film Sebastiane is a loose retelling of the story of the martyrdom of St. Sebastian. The martyr’s tale is recontextualised from its Christian origins into an unapologetic representation of queer male desire and a commentary on the nature of reception. However, it has received relatively little scholarly attention from the perspective of Classical reception or reception more generally[2]. This is disappointing considering the film's unique position as a work: it is a homoerotic appropriation of Christian hagiography, a deliberately disorientating experiment in the relationship between history and the present, a film that more than forty years on remains one of the few to be dialogued entirely in Latin, and even more besides these. The film itself was also significant upon its release, which makes this neglect of the film surprising as well as frustrating. It is perhaps easy for us in a modern context to forget the impact such a frank cinematic depiction of homosexuality could and did have at the time of its release, just nine years after the decriminalisation of homosexuality in the UK. Jarman calls the film ‘historically important’ since it ‘didn't present homosexuality as a problem’[3], and it is said to have acted as a catalyst for the nascent gay liberation movement in Switzerland[4]. It presented itself in stark contrast to the homophobia that characterised mainstream cinema and lived reality for queer individuals in this period, providing a means of both subversion and affirmation for its audience.

The appropriation and adaptation of the past in order to create new narratives resonant with the contemporary present is a characteristic found throughout Jarman’s filmography, from his biopic Caravaggio (1986) to his Marlowe-adaptation Edward II (1991). His aims in his historically-inspired works are never simply recreation of history or ‘authentic’ adaptation; rather, his goal is always to probe the relationship between the past and present, to question established narratives, blur temporal lines, and assert queer individuals’ right to a presence in history. As film theorist Niall Richardson explains-

This supposed ‘collapse’ of the boundary between past and present is especially present in Sebastiane, perhaps the most out of his entire filmography[6]. While all historical films may be read as expressions of contemporary conceptions of the past, Jarman goes further than most by calling attention to this process and deliberately exploiting this unreality. The opening shot of the film is a painted stage background of the Colosseum, signalling from the outset the unreal nature of what is to come; this will not be a 'true' representation of antiquity but a constructed performance of it. We are then taken to a scene of an orgy in the court of the Emperor Diocletian, yet the modern intrudes all aspects. The guests at the orgy are all Jarman’s friends from the contemporary gay, artistic scenes of London, which attention is  revealed as the camera focuses on the faces of the party-goers, lingering as if to allow a moment of recognition[7]. After this Sebastian is exiled as punishment for defending a Christian at this orgy, yet the temporal dislocation continues. We are in the company of a Roman legion communally bathing when Max reminisces about participating in the films of Cecil DeMille and mentions the ‘perversity’ of a recent theatre production of the Satyricon by 'Philistinus', a reference to Fellini's Satyricon (1969). We also have the men of the legion making insulting remarks about a so-called ‘Maria Domusalba’, a Latin equivalent for the name of the notorious homophobe, Mary Whitehouse. Jarman, like many before him, uses the Classical as a potential touchstone for locating queer individuals within history where they have otherwise been erased, while also firmly asserting the film’s relevance to the present. He is not simply trying to locate a theoretical past queer space but calling upon his audience to think about our relationship to history and how we construct it. Sebastian and his story are never allowed to exist in isolation or on their own terms, the present is inescapable, commenting on the reciprocal nature of historical reception as the present informs how we view the past and vice versa.

The question then arises: why St. Sebastian? Jarman is here drawing on a long tradition of St. Sebastian being interpreted as a figure of ‘transgressive’ sexuality and latent homosexuality[8].  In his Renaissance iconography he is portrayed as a youthful naked man, as if a Classical nude statue, serene or ecstatic in the midst of his execution.[9] This came to be interpreted as a symbol of 'perverse' sexuality due to the saint's perceived sexual gratification at his own martyrdom, or as Jarman himself puts it the saint is ‘In Love with his martyrdom’[10]. He therefore came to be adopted by a number of creatives from the Victorian era onwards as an allusive symbol of homoerotic desire; a transgressive reformulation of an iconography associated with an institution that so frequently punished expressions of said desire. By choosing the figure of St. Sebastian, Jarman thus places this film in direct dialogue with this queer heritage, while also giving the story a subversive edge by appropriating traditionally Christian imagery.

Jarman is certainly playing ‘fast and loose with history’[11] here but to dismiss the film because of this is to entirely miss the point. He is not disregarding history with this film in order to create a purely fictional story of queerness with a historical veneer superficially painted over it. He in fact shows a great interest in the historical process, interrogating how history is used and constructed by the present. In this film we see a pure expression of queer individuals striving to find a place for themselves within the past, negotiating the lines between heritage, history, and reception. This results in a highly unique work to which we should direct greater attention.

Carla-Uhink, F. (2017) 'Thinking through the Ancient World: “Late Antique Movies” as a Mirror of Shifting Attitudes towards Christian Religion' in Pomeroy, A. (ed.) A Companion to Ancient Greece and Rome on Screen

[2] Wyke (2005) remains one of the only specific analyses of the film as a piece of Classical reception. Carla-Uhink (2017) offers analysis of the film in the context of the reception of Christianity and Late Antiquity in film. Beyond this one often finds little attention granted to the film beyond passing mention; it is for the most part ignored in many works on Classics in film.

[7] Some examples include- the bizarre ritual dance being led by the choreographer Lindsay Kemp, the artist Robert Medley playing the emperor Diocletian, and the punk-muse Jordan wearing a fantastically anachronistic latex outfit.

[8] Kaye (1996) provides a thorough discussion of the history of St. Sebastian’s iconography and how he came to be adopted as a ‘gay’ saint

[9] Evoking painterly compositions is a Jarman trademark and this film is no different. It deliberately evokes a number of said paintings in its shot composition, E.g. Reni's Sebastian (Figure 1) mirroring the film Sebastian's execution with his hands tied up and a single arrow piercing his armpit, or the arrangement of the soldiers around Sebastian at the end of the film mirroring the six executioners surrounding the saint in the Pollaiuolo brothers' “The Martyrdom of Saint Sebastian” (1475), or Justin’s dead body being cradled as if in a pietà scene. 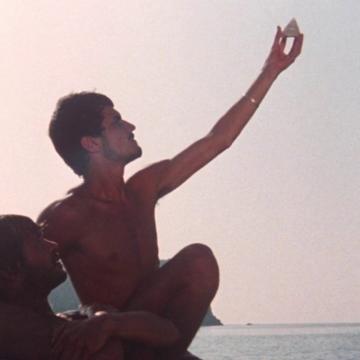