Reflections on 'Journeys to Oxford'

I love Oxford and have a passion for lesser heard stories, so when TORCH developed a Knowledge Exchange project called ‘Journeys to Oxford’ that brought together the Museum of Oxford, the people of Oxford and myself as a researcher, it was an inviting opportunity.

The Museum of Oxford is relaunching in 2020 and ‘Journeys to Oxford’ will be a permanent exhibition featuring the lives of people who moved to Oxford and have left their mark on the city.

I am an anthropologist and historian and the vast majority of my research is based in the city of Oxford. One of the challenges for museums representing the stories of people who have moved from one place to another, is the collection of objects for their displays. All too often, even though the stories and legacies remain, material culture is deemed as either too precious to donate or has been lost. While working on the project, I would hear beautiful descriptions of things or photographs that people no longer had in their possession.

Even so, thanks to the patience and generosity of the Oxford residents who have participated in the project, a fascinating collection of objects and stories have come together that shed a surprising light on Oxford’s history. There is the Welsh community that walked all the way from Wales to Oxford in the ‘30s in search of a better life, the brothers from Pakistan whose business has kept the city on the move for over two decades and people from the Caribbean who became a part of the city’s cultural heritage.

When the exhibition opens it will give its many visitors a chance to look at Oxford anew and think about what continues to make it such a unique city. Oxford is traditional but also willing to embrace the new and this is clear in the stories of how people who seem to come from such different backgrounds and places have studied, lived and worked together. Following my research, I will never look at the gargoyles on Oxford buildings in the same way again, now that I know they feature faces of people I would have never expected to see. 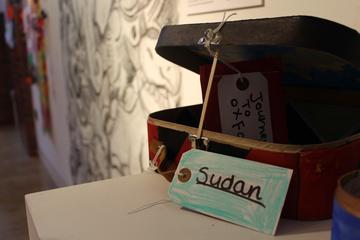