Reflections on memorials and commemoration in Berlin

Over twenty years of regular visits I have ‘done’ commemorative Berlin: the Topography of Terror, the Haus am Checkpoint Charlie, the Memorial to the Murdered Jews of Europe, the Kaiser Wilhelm Gedächtniskirche, and countless other monuments and memorial museums. Berlin leads the world in Vergangenheitsbewältigung – struggling to come to terms with the past – and this is reflected in its public spaces, replete with monuments and counter-monuments, the scars of conflict, and other sober expressions of civic regret.

On a trip a few years ago I visited the newly reopened Neues Museum to take in both the prehistoric archaeology and the scars of bombing and fire left starkly visible on the grand staircases and elsewhere. High up in the museum in a small and less-visited room I experienced an odd double take. I had admired a chunk of blue coral and imagined it taken from a Mediterranean seabed, but the label described it as a paper bag of ancient glass beads from the museum store, melted into a lump by Allied firebombs. Looking again, I could only see the beads and their material reproach. In a city of loud and explicit commemoration it’s a surprise when the traces of violence creep up on you like that.

On my most recent visit I experienced another memorial double take. Walking from Zoo Station to my hotel late at night I passed by the Kaiser Wilhelm Gedächtniskirche, and stepped carefully over what I took to be a stream of urine flowing from the steps. Even after I had stopped to consider the candles, photographs, flower and religious icons, and the names of the dead carved into the steps, it took me a few moments to connect the site with the lorry attack on the Christmas market in December 2016. Two friends had narrowly avoided injury in this attack, stood just a few metres from the path torn by the lorry through the crowd. It was this path, now marked with a narrow jagged strip of brass, that I had mistaken in the dark for a rivulet of piss.

Counter-monumentality is a movement in art, architecture and design that rejects or subverts the traditional grandiose, classical approach to memorials in favour of the discordant, the troubling, the challenging. Counter-monuments perpetuate the processes of wrestling with the past and reject a coming-to-terms. In their architectural audacity they shock and outrage passers-by, or at least cause them discomfort.

The small shocks of the glass beads and the brass strip are a different type – individual-scale counter-memorials that act once, in a moment in time and place, to create a jarring sense of the violence of history. A more deliberate version of this is the remarkable Stolpersteine project, the small brass plates affixed to pavements across Europe to mark the homes from where individual, named victims of the Nazis were sent to their deaths.

Stumbling unexpectedly across a memorial to violence is jarring: the experiences I’ve described here are more intense and personal than just another visit to a memorial museum. They linger in my memory and often spring to mind, as all memorials aspire to but with rare success.

Gabe Moshenska was a panellist at the first workshop of the Monumental Commemoration strand, ‘Museums and National Identity’. You can listen to the panellists’ presentations on our podcast series. 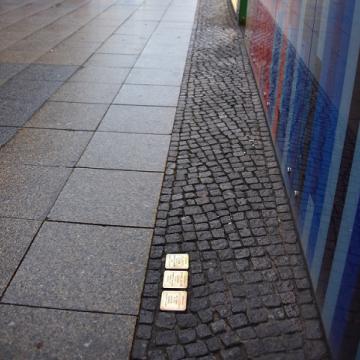