Reflections on the Oxford-Berlin-Padua First Workshop on Mobility

From the 25th to the 27th of April 2019 the History Faculty of the Oxford University hosted the first workshop organised by the Oxford-Berlin-Padua Research Network- Mobility in Historical Perspective. This research network was born thanks to the collaboration of researchers from the University of Oxford, Padua and Berlin (Humboldt and Freie Universität), and was funded by the Oxford Berlin Research Partnership.

The workshop allowed academics at various career stages (professors, postdoctoral researchers and doctoral students) to gather and discuss the theme of human mobility from a historical perspective. The breadth of approaches demonstrated by the participants was impressive, with papers ranging chronologically from the early Middle Ages to the 20th century, and geographically from Africa to India, the Caribbean and m any other parts of the world. The themes approached were also varied, as was expected from such a broad theme: the choice was meant exactly to allow a variety of scholars to participate, and to analyse the topic in all its possible implications.

Collective and individual migration, confinement and exile, nomadic empires and itinerant merchants, the mobility of intellectuals in their quest for accumulating or disseminating knowledge, and even the relocations of a ‘special’ type of humans such as Christian saints were among the themes approached by the workshop. This variety allowed participants to reflect on the agency of the humans involved in all these types of mobility, as well as on the socioeconomic and cultural factors that prompted them to start their journeys.

Besides the academic contributions, the workshop featured moments devoted to allow participants to network and develop deeper intellectual connections between members of different institutions; a key feature of the event, moreover, was the space given to discussion of funding opportunities in the countries of the organizing institutions, another great opportunity for participants to plan new international partnerships.

The successful choice to adopt a long-term chronological approach clearly showed that mobility has always been a central feature of human life. Moreover, it gave the opportunity to look at the phenomenon of mobility from different perspectives, comparing various historiographical approaches and methods depending not just on the individual formation and preference of the scholars, but also on their affiliation. The meeting of the three academic communities, indeed, demonstrated that there are different angles from which mobility studies can be approached and gave everyone the opportunity to get acquainted with the different scholarly traditions of the three countries. For the University of Padua particularly the meeting represented a precious opportunity to develop new insights on its project on mobility in collaboration with prestigious international partners.

The choice of an empirical approach, namely the presentation of several ongoing researches, was useful to understand the different meanings of mobility and allowed to bring out also aspects of it that are not so evident or immediate. Further developing the approach that emerged from this first meeting, an opportunity for the next one would be to encourage a broader theoretical introduction on the topic, in order to facilitate and improve the discussion, which could benefit also from circulating papers in advance.

The dialogue was particularly fruitful because both junior and senior scholars with variety of backgrounds – they were not just specialists of mobility – were keen to discuss, offered interesting insights and asked thought-provoking questions. This was particularly useful for junior scholars, which received much feedback on their projects, but senior scholars profited from it too. Moreover, the participation in the next workshops of PhD students also from the two Berlin Universities (who were not able to come this time) could be a profitable addition not only to the debate, but also to create connections between junior scholars and encourage future collaborations.

Such events are good occasions to build bridges at both institutional and personal level. The setting of the workshop was functional in this sense, because it facilitated a continuous exchange of ideas and an active participation of the scholars. Furthermore, there was precious time to socialise during the pauses. All in all, there was a fine balance between work and socials.

All participants at the first workshop agree that the event was a huge success. In addition to highlighting the common scientific interests among the organising institutions, what has clearly emerged is the desire to continue and strengthen the collaboration despite recent political events. Representatives of the universities involved have repeated several times that international politics will not affect in any way the academic collaborations and personal relations consolidated throughout the years.

To avoid the risk of not translating these words into actions, many initiatives have been established in preparation for future workshops. First, it was decided to create a mailing list containing the email addresses of all the participants, as well as a dedicated website and an electronic bulletin that will be useful to publicize all future activities. Additionally, the dates of the next events have already been scheduled. The next workshop will take place in Padua, 3-5 October 2019, on the theme of Intellectual Mobility, and the second in Berlin, to be held in 2020, on the topic of Economic Mobility.

With the continuation of the workshops, it is expected not only that the number of the collaborators will grow, but also that this international network will be strengthened and extended, thanks to the various meeting opportunities that the partners will have in the next few years.

International meetings such as “Mobility in Historical Perspective” are above all opportunities to discuss and share knowledge among scholars. Besides contributing to circulating ideas, they are great venues to compare different approaches and methodologies but also research practices from different University. It is indeed in international workshops that innovative perspectives on traditional research issues usually arise by challenging established points of view and methodologies. On a personal level we believe that they prove extremely useful for junior scholars as a chance to promote their research out of their own University and getting motivating feedbacks, as well as to experience different academic realities. Moreover, they facilitate building up professional relationships between scholars at different career stages, overcoming academic hierarchies. Thus, international meetings should be promoted because they facilitate socialization between Universities and between scholars, making new creative cooperation possible. At the same time, new approaches which emerge in such environments affect the universities involved as a whole, enhancing the development of new research cultures inside the university itself, thus facilitating academic renewal.

Niccolò Caramel is doing his PhD in Historical Studies (Universities of Padua, Ca’ Foscari Venice, Verona) with a research project on the commercial relationship between the street vendors of books and engravings from the Tesino Valley (Italian Alps) and several printers of Augsburg and the Venetian Republic (18th century). He studied at the Universities of Verona and Trento where he obtained his BA degree in Philosophy (2011/2012), MA in Philosophical Sciences (2014/2015) and MA in Historical Sciences (2015/2016).

Cecilia Molesini is doing her PhD in Historical Studies at the University of Padua. She is working on the forced migration of Germans from Eastern Europe and their relationship with their homeland after WWII through the lens of the history of emotions. She graduated in philosophy and international relations at the University of Bologna and spent some months studying in Berlin and Moscow.

Alessandra Vigo is completing a PhD in Historical Studies at the University of Padua. Her research project focuses on Italians repatriated from Italian colonies in Africa and from Italian communities in Tunisia and Egypt after WW2. She is interested, in particular, in the process of their social integration in Italy and how it affected the ways in which they felt Italian.

Lidia Zanetti Domingues is the International Officer at TORCH and has recently completed her DPhil in Medieval History at the University of Oxford, where she studied the influence of penitential spirituality on the development of communal criminal justice. From October 2019, Lidia will be a Past & Present Fellow at the Institute of Historical Research. 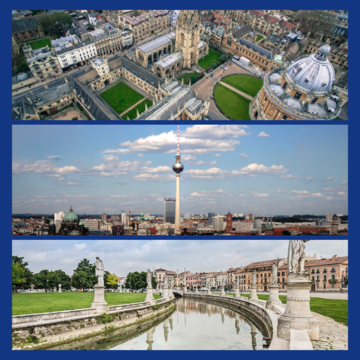