At the beginning of this year I travelled (against a number of warnings) to one of the most turbulent regions of the Middle East; Afghanistan. I spent two weeks volunteering as a music tutor at the Afghanistan National Institute of Music, the only music school in the country. Whilst working I was carrying out research for my Masters thesis which aims to look at the positive, therapeutic role of music in conflict-ridden Afghanistan and the physical and psychological haven the school provides for the students.

Arriving at Kabul airport was overwhelming on the senses; noisy, crowded, and cold. But I was excited, looking forward to meeting new musicians and experiencing a world far removed from my life in England. During my first day, walking through the corridors of ANIM, I was continually approached by students and teachers offering a friendly ‘salaam’ and warmly welcoming me to both Afghanistan and the school. It almost made me late to my lessons!  Schools in Afghanistan are usually closed during the cold winter months as the government cannot afford to heat the buildings and electricity is sporadic during the day. However, ANIM is fortunate enough to have funding to enable its buildings to be heated during winter and thus they run a ‘Winter Camp’ during the holidays. The camp is not only important for keeping the students’ practice and technique consistent, but also provides many with a safe place to be over the break. For many of the children, their friends and teachers at ANIM are their family.

The main method of research I chose to follow was to participate in the everyday life of the school as a ‘guest artist’. From 8.30am – 3.30pm each day I tutored flute, oboe, and clarinet on a one-to-one basis and conducted woodwind sectionals for the orchestra and girls’ ensemble. This enabled me to build a rapport with the students I later interviewed and observe them in their everyday environment in the school. Half of the students attending the school were either previously working on the streets (selling goods) or live at one of the many orphanages in the city. Dr Sarmast, the school’s founder, has worked tirelessly to keep these students in education; in the schools infancy, many of the street kids dropped out as their family income vanished when they started, and so a monthly stipend equivalent to the child’s previous income was provided to the families.

As I developed a bond with a few of my students they were happy to tell me their story; life before ANIM, their family history, and their feelings about music. In preparation for my studies I began learning Persian last year and was pleasantly surprised by my ability to converse. All of the students learn English as one of their subjects so some interviews were conducted in English, whilst for some of the younger children I sought assistance for the school’s translator. During the interviews I asked questions such as ‘how do you feel when you enter ANIM each morning’, and ‘can you describe the sort of emotions and feelings you experience when playing’. One of the most interesting topics raised was the diverse ethnic patchwork which makes up the student body at the school and how perceptions of other students change over time; I will be developing the idea of music traversing cultural and ethnic divisions in my subsequent research. Many of the students spoke with great enthusiasm and passion about their future careers and their desire to stay in Afghanistan and play a key role in the generation which they hope will transform the country for the better. In addition to student interviews, I had discussions with other teachers and Dr Sarmast, enabling me to explore more abstract concepts in more details. Furthermore, I was able to learn about some of the more sensitive aspects of the students’ lives without making them feel uncomfortable or exposed. However, the sense how important the school is to the students cannot be entirely verbalised and only by immersing oneself in the environment can one understand this remarkable place.

Security in the city, and the country as a whole, is deteriorating due to the recent insurgence of the Taliban following the withdrawal of foreign troops. Living in a war zone is a surreal experience; being frisked to go in a supermarket, seeing armed guards outside every building, and watching military helicopters depart the army base with the frequency of airliners leaving Heathrow. Whilst I was there two separate attacks rocked the city: the first saw a rocket launched in the ‘Green Zone’, landing within the Italian embassy compound; the second, a suicide bomb which targeted a mini-bus of ‘Tolo TV’ journalists outside the Russian embassy, killing seven people. On my last day at the school, we had what you would describe as not your average morning briefing… Dr Sarmast had been given warning of a car in the neighbourhood filled with explosives. The school, which teaches music to both boys and girls together, is a believed to be a potential target for the Taliban and as such we were reminded of the security procedures should something happen in the area. Thankfully nothing did and the suspects were later arrested. Education in this environment takes on a whole new meaning and significance; here, it is not to be taken for granted. The bravery of the teachers and the students to continue teaching, learning and defending their right to play music despite the risks is quite incredible.

I travelled to Kabul with a very open mind and broad research ideas. I didn’t want to go looking for something I thought was there and overlook what was really going on at the school. The trip has given me paths to follow in the area of musical asylums (a concept proposed by Tia DeNora), music as therapy (as opposed to the clinical discipline of ‘music therapy’) and the aesthetic theories of Hindustani music. By visiting the school in person I now have good contacts with which I can correspond and continue my research over the coming months. I have many hours of interviews to transcribe and videos to analyse and look forward to presenting my initial research to my fellow students in week 7 as part of my ‘Presentation Seminar’ course.

I would like to thank Lincoln College and the Graduate Travel Fund for financially assisting me with what was an extremely worthwhile, valuable, and memorable trip. I would also like to thank the staff and students at ANIM for so warmly welcoming me into their community. 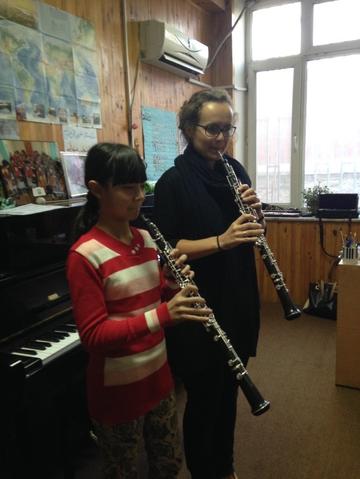