Returning from Germany, Reflections on Silence

With our signatures below, we accept the public requirement that with immediate effect, we are not permitted to appear on the street or in other public places between the hours of……..

And so it began. In the first week of September 1939, the members of the Lipschitz family in Augsburg acknowledged officially that there was, now, no place for them in the public sphere of the city that had been their home for generations. In general, what was to follow in the ensuing weeks, months and years is only too well known, though I only learned about this particular family in July 2018. On the ground floor of the magnificent Town Hall, completed in 1624, a room has been set aside in memory of the Jewish citizens of Augsburg, deported to their deaths in the Holocaust. The names of each one are recorded with a quiet dignity, engraved simply on glass panels, individuals, whole families. Without any notice requesting or requiring it, the room is silent. The names themselves say all there is to be said.

Not so far away, in the town of Landshut, also in Bavaria, the warm sun shone this week, bringing the handsomely restored renaissance, baroque and classical buildings of the Altstadt beautifully to life. The tower of St Martin’s Church, begun in 1380, soars up towards the massive castle overlooking the town. Above its main west door, the tympanum dramatically depicts two scenes, Ecclesia and Synagoga, divided by a crucifixion. On the left, a priest administers communion to those citizens who have clearly recognised the true faith. Angels hover, ready to welcome them. On the right stands the white-clad figure of the synagogue, blindfolded to show her inability to perceive the truth, the crown falling from her head, her broken staff representing the rejection of the Jews by the Church (and, by chilling implication, God). Here, in the centre of the old city, stands a testament to the commonly heard anti-Jewish propaganda that was then at the heart of the Church’s teaching. Here too there is silence, but silence of a different quality from that of the memorial room of the town hall in Augsburg. No explanation is given of the tympanum; the visitor’s attention is not drawn to it in any way; its powerful symbolism and its contribution to the received wisdom of the day – that the Jews were outcasts, and worse – are silently lost amid the splendour of the great church.

Regensburg – Ratisbon of the Roman Empire – is a great city, the magnificent gothic cathedral, built partly on the site of an earlier romanesque construction, towering over the city centre. A short walk away stands the New Parish Church, so called after the moment when the teachings of Martin Luther began to unsettle and then supersede those of the dominant Catholic church. The area between those two buildings encompasses the heart of the medieval Jewish ghetto, from where, on 21st February 1519, all the Jews were driven out, their synagogue burned, their possessions taken. It was not until the Enlightenment and the spread of ideas of equality and citizenship following the French Revolution, that they were able to return. The footprint of the synagogue is recreated in New Parish Church Square, in silent, sculpted quasi-archaeological form, as a new Place of Encounter: silent in itself, but providing the space for dialogue. On 9th November 1938, on the same spot, there was a public burning of books, before the Jews once again were forced to leave, this time to their deaths, preceded by the humiliation of a March of Shame through the city. Today, within the New Parish Church, an exhibition recounts and illustrates the chapters of the Jewish history of Regensburg, including the establishment of a new community there after the Holocaust. This particular church is not silent, perhaps reflecting the prescient words of Habakkuk 2:11 – “For the stone will cry out from the wall, and the beam from the woodwork respond”.

Three great, German cities, each with its distinguished history encompassing the many centuries before there even was a Germany, each in its own way encapsulating the symbiotic relationship between their Jewish and Gentile residents that for long periods had been not only peaceful but productive and of mutual benefit, until at various points during a thousand years, it was to be fatally undermined by church and state, with catastrophic, tragic consequences.

Three approaches to silence: the humble, recognising that some horrors are beyond language; the quiet “no comment”, leaving the message of history concealed in broad daylight; and the brave expression, through the printed word and the universality of art, of a truth that cannot be altered.

There’s no fake news here. But there’s also no doubt that Germany, with its thousand-year-old Jewish history, has shown how to handle its past and how silence can be both a positive and a negative part of that process. Would that the world had shown itself equally sensitive, and ready to confront reality.

John Dunston MA ACIL FRSA is Tutor at the Farmington Institute and, from October 2018, Supernumerary Fellow and Director of Music at Harris Manchester College, University of Oxford.

He was a panellist in the second workshop of the Aural Commemoration strand, ‘The Rest is Silence’. You can listen to the panellists’ presentations on our podcast series. 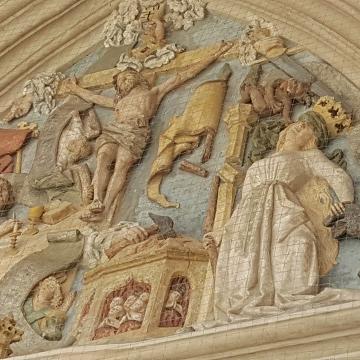