Review of the Adventures of John Blake: Mystery of the Ghost Ship

The Phoenix, a weekly comic aimed at children that includes serialised adventure stories, short strips and non-fictional graphics, is something of an Oxford institution. Arriving through the post to subscribers, but also with individual issues on sale online as well as in Cowley Road’s comics shop, Inky Fingers, The Phoenix has been widely read and celebrated since its launch in 2012. It was with great excitement, then, that Philip Pullman—an author who is similarly famous for his literary affiliations with Oxford—began writing a serialised comic for The Phoenix. Illustrated by Fred Fordham, the serial instalments of which The Adventures of John Blake: Mystery of the Ghost Strip is comprised, have now been collected and published in a beautiful ‘graphic novel’ style book, allowing young readers the opportunity to read and own the series in its entirety.

Following the story of a ship, the Mary Alice, that sails not only across oceans but also through time (from the fifteenth century through to the twenty first), The Adventures of John Blake combines the science fiction elements with which comics have long been associated with other compelling genres, from spy fiction to the gothic short story. The comic’s interweaving narratives employ plot traits that will resonate with readers of Pullman’s acclaimed fantasy trilogy, His Dark Materials. It revolves around two young protagonists, the titular John Blake, and Serena, who unwittingly finds herself aboard the Mary Alice after a particularly violent storm; they move through different temporal worlds that exist alongside one another, as the ship jumps between them via a meteorologically identified portholes; and they are pursued by a sinister, secret global organisation known as ‘the supremacy’.

As these elements might suggest, then, it’s a fast-paced, action-packed comic with a plot sure to ensnare the thrill-seeking younger reader, but that will also entertain the slightly older ones as well. Fred Fordham’s cinematic visuals both beautifully capture the movement of car chases and combat sequences, as well as conjuring the atmospheric fog that shrouds the Mary Alice. Meanwhile, the subtly irregular use of panels of various sizes, though not breaking the fourth wall and commanding readers’ attention, create a rhythm that complements the motions of the plot.

Pullman’s childhood enthusiasm for comics is evident in the The Adventures of John Blake: Mystery of the Ghost Ship, and readers of The Phoenix will surely hope that more of John Blake’s adventures are on their way. In the meantime, this collected edition of the comic is a great chance to read and reread Pullman’s first compelling foray into comics writing. 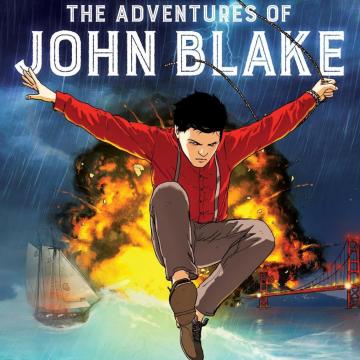