Rituals and Resonances: A musical contribution

Traditional Chinese music is distinct from its Western classical counterpart in numerous ways. From its culture and history to its instruments and notation, the differences are readily perceivable in study, semblance, and sound. The relationship between these traditions is of course complex on the other hand, particularly in the ways in which they can be seen to overlap and importantly, coexist. Composers throughout the last century including Claude Debussy, Igor Stravinsky and John Cage have thus investigated the opportunity to intersect these practices and have played a vital role in establishing the potential of Chinese culture as a source of compositional inspiration in the West. Today, with examples such as Tan Dun’s Organic Trilogy that explores music for paper, water and earth; Liza Lim’s Chinese ritual street opera, Moon Spirit Feasting; and Unsuk Chin’s concerto for sheng and orchestra, Šu; it is clear that Chinese culture continues to inform, influence, and ignite contemporary composition.

Beyond the sonic richness offered however, there is a greater socio-political significance behind the exploration and promotion of Chinese (and more broadly non-Western) cultures on a variety of levels. Whether in light of new research that found that Chinese people in Britain faced the highest levels of reported racial harassment in the last year, or the worrying popularity of political isolationism in the last year with the election of Donald Trump and the ‘Brexit’ decision being just two examples, I believe messages of both inter-cultural dialogue and cultural demarginalization are hugely relevant and necessary.

The importance of art in this context cannot be overestimated, and the massive successes of Hamilton and Black Panther have demonstrated that in a society that too often appears closed and lacking compassion, art can inspire and motivate journeys towards positive change. Indeed, with the recent awarding of the Pulitzer Prize to Kendrick Lamar that suggests a willingness to transform to a more diverse and inclusive stance within music, I hope some of these journeys have already begun.

A primary impetus behind this work was a consideration of the dislocation between cultural identity and heritage that may affect those born outside their place of origin. This can be thought of as a paradoxical sense of nostalgia – a longing for a past transcending a purely temporal notion and encompassing also a culture that simply did not exist for its subject. Of course, such an anxiety is arguably only perpetuated as long as one thinks about it, yet it may manifest itself as clearly as being unable to communicate with one’s grandparents due to a lack of a shared language.

Rituals and Resonances attempts to engage with this idea, and takes as its musical framework an exploration of the relationship between sound and its resonance. Just as one does not have (or need) control over their heritage and origins, a sound may include resonances far removed from its initial perception that although appear incongruous, are in fact quintessential to its being. Indeed, the yangqin itself is distinct to Western string instruments in its non-linear and inconsistent distribution of pitches, and so much of the writing of this piece is informed by the geographical layout of the instrument. The desire to compose idiomatically for an unfamiliar instrument was most challenging and to some extent undoubtedly futile, but equally it seems there is some value in acknowledging the challenge and contemplating its significance. In this way, nostalgia is similarly paradoxical, for in the words of Marta Caminero-Santangelo, “it is not lost at all, [but instead] the only culture shaping the person's perspective”.

The piece is dedicated to Reylon Yount and my grandparents.

Citations and links for further reading:

1/ Alita Nandi, Renee Luthra, Michaela Benzeval, Shamit Saggar, 2017.  The prevalence and persistence of ethnic and racial harassment and its impact on health: a longitudinal analysis, Institute of Social and Economic Research, University of Essex

A composer from London, Alex has had compositions performed by the likes of the Shanghai Philharmonic Orchestra, Psappha Ensemble, Roderick Williams, and the choirs of Christ Church Cathedral and Merton College, Oxford. His music attempts to explore and interrogate the cross-cultural possibilities between Chinese and western musical traditions. Alex studied music at Oxford University before completing a master’s in composition at Cambridge University in 2017. https://www.alexhocomposer.com/ 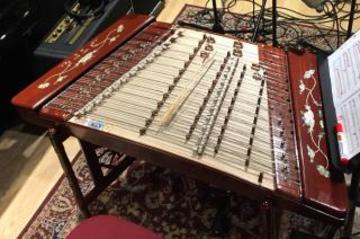