Leah Broad looks at the influence of Shakespeare on Nordic composers, at Corymbus

This article by Leah Broad is republished from Corymbus, a blog illuminating classical music in the twenty-first century.

Shakespeare, Shakespeare, Shakespeare. With the 400th anniversary of his death this year (following hot on the heels of his 450th birthday in 2014), it’s difficult to go far before being confronted by the British bard. I am always a little nervous about anniversaries, because they run the distinct risk of becoming tedious. Repeated showings of Timon of Athens and Titus Andronicus set in Fascist Germany are enough to put anybody off Shakespeare for life. And Shakespeare hardly needs more advocacy — as one of my friends put it, ‘Well, he can’t live up to the hype. Just makes him seem a bit over-rated, doesn’t it?’

In some ways, I’m inclined to agree. But it’s because he’s over-rated that Shakespeare can be so fascinating. Lauded as a universal playwright of the people, Shakespeare has been reinvented in the image of every generation — and not just in Britain. His plays are something of a geographical and chronological constant, enduring across continents and throughout changing political regimes. Shakespeare is a mirror which cultures have held up to themselves, reflecting fragments of history through his familiar words.

Take, for example, the Nordic countries at the turn of the twentieth century. Alongside the Swedish playwright August Strindberg, Shakespeare was seen as a touchstone for the “modern” director, continually staged in both the provinces and capitals of the Nordic countries. The Swedish director Per Lindberg staged Hamlet (twice), As You Like It, King Lear, Romeo and Juliet, The Comedy of Errors, The Merchant of Venice and Othello at the Lorensberg Theatre in Gothenburg; when he later moved to Stockholm, his first major production in 1926 was Antony and Cleopatra. Such was Shakespeare’s popularity in Scandinavia that in Danish critic Georg Brandes’ 1898 critical history of the playwright, Brandes wrote: ‘Europe is still busied with him as though with a contemporary. His dramas are acted and read wherever civilisation extends.’

And central to all these productions was music. Music is threaded into the fabric of Shakespeare’s plays, from the opening of Twelfth Night (‘If music be the food of love, play on’) to Hamlet likening himself to an instrument (‘there is much music, excellent voice, in this little organ; yet cannot you make it speak’) and the witches’ scenes in Macbeth (‘I’ll charm the air to give a sound / While you perform your antic round’).

For a composer, Shakespeare is the gift that keeps on giving. In his lifetime, it is likely that music would only have been used when called for in the script — when the clown in Twelfth Night sings ‘Come away, come away death’, for example. This probably would have been a solo singer, perhaps accompanied by a single instrument (for, as Shakespeare was at pains to point out, musicians were expensive to hire).

Twentieth century composers provided music for these moments (‘Come away death’ was set by Jean Sibelius, in the Swedish translation ‘Kom nu hit, död’), but they also wrote much more extensive orchestral scores to accompany these dramas. It was customary to commission incidental music for the largest productions of the early twentieth century stage, and Shakespeare performances fell squarely into this bracket. The Swedish composer Ture Rangström wrote no fewer than 50 short movements for Hamlet in 1942, and Sibelius produced 34 pieces for The Tempest in 1925-26, orchestrated for some of the largest forces he ever composed for.

Sadly, much of this music has never made its way into published, let alone recorded, format. At least part of the problem lies in the nature of incidental music — without the production that the music was meant for, it loses much of its context. Even setting aside the visual aspects, if you record theatre music, do you include the text? Another clue is in the terminology itself — “incidental” music. The sonic elements of the theatre are so often forgotten, assumed to be subordinate to a performance’s visual and textual elements.

But these scores were the lifeblood of the twentieth century stage. In 1908, one reviewer wrote of Sibelius’s music for Strindberg’s play Swanwhite that it was ‘needed so that the piece can work on stage.’ And the theatre provided a vital platform for experimentation. Theatrical resources were often so limited that composers had to look for innovative new methods of scoring, and ways of being expressive in an extremely concentrated format.

We only have to turn to Sibelius’s second song in his Twelfth Night settings, ‘Hey ho, the wind and the rain’, to hear this. It’s a cheeky, modern setting that relies on having performers with a flair for the dramatic. It takes the ribald humour of Shakespeare’s original setting and puts a twentieth century spin on it: and at a running time of just over 2 minutes, Sibelius has a very short amount of time in which to do so. Techniques honed on the theatrical stage were transferred across to concert works, and vice versa, the different genres enjoying a mutually symbiotic relationship.

Sibelius’s Overture for The Tempest — his study of a storm with its whirling, destructive aeolian sonorities — generates the sound-world for his final tone poem Tapiola, composed only a year later. Musicologist Daniel Grimley has suggested that Sibelius’s interest in The Tempest is fundamental to understanding both Sibelius’s late works and his later silence; that he was drawn to the play because of the character of Prospero, and because of all Shakespeare’s plays, it is the one most motivated by music. Sibelius himself wrote to the critic Gunnar Hauch that ’The Tempest [is dearest to me] because of its musicality.’ He seems to have identified strongly with Tempest’s cast of exiles, especially the creative castaway Prospero.

At the time, Prospero was broadly interpreted as Shakespeare’s autobiographical character, and that the character of the creative castaway was Shakespeare’s meditation upon his own late years and artistic process. This no doubt resonated with Sibelius at a period when he was struggling with his own self-criticism, struggling to justify his place on an international stage that was increasingly attentive to the angular sounds of Schoenberg, Stravinsky, and Scriabin. Sibelius’s setting of The Tempest, then, holds invaluable keys to his later compositional years.

On the other end of the spectrum lies Lars-Erik Larsson’s orchestral piece En vintersaga. This is not incidental music per se, but was commissioned in 1937 for a radio broadcast of A Winter’s Tale.  Larsson is an eclectic composer difficult to pigeon-hole in to any one specific “style”, but En vintersaga is a lush, romantic score that emphasises the pastoral elements of Shakespeare’s script. The Prologue opens with lilting, low strings over a bass drone, the gentle melody passing between the winds before culminating in a statement in the brass. The rippling wind motifs capture the fluidity of Shakespeare’s text, such as when Polixenes says ‘Nine changes of the watery star hath been/ The shepherd’s note since we have left our throne/ Without a burden.’

Within Sweden, only Larsson’s contemporary Hugo Alfvén could rival him for popularity, and Larsson undoubtedly drew on the sound world of his most popular work, Midsommarvaka, (‘Midsummer vigil’). This is an orchestral rhapsody that depicts the gaiety of the Swedish Midsummer festival, using Swedish folk tunes and dance rhythms. By transferring these sounds to Twelfth Night, Larsson set Shakespeare’s play in a place that is both timeless — Midsummer has pagan associations, seen as a liminal space between past and future, the real and the imaginary or mystical — but also identifiably Swedish.

Nearly twenty years later, in 1951/2, the sound of ‘Swedish Shakespeare’ had changed considerably. Titled ‘Symphony shakespeariana’, Gösta Nystroem’s 4th Symphony was composed in the wake of his music for both The Tempest (1934) and The Merchant of Venice (1936). Shakespeare clearly stayed with him, subtitling the symphony’s movements with quotations from the sonnets and from The Tempest.

Please click here to listen to the clip on Spotify: https://embed.spotify.com/track/4dXM9gO86tRUylgV3Z8WPn

Nystroem’s Prelude to Tempest bears some remarkable similarities to Sibelius’s, but it is an altogether more mechanical storm, with undertones of music such as Alexander Mosolov’s Iron Foundry underlying the wordless chorus. His symphonic version is less pictatorial, but retains the idea of nature tempered by a destructive militaristic pulse. Moving away from Sibelius’s almost symbolist concerns about the individual in nature, Nystroem’s Shakespeare seems to occupy an altogether more politicised landscape, emerging fragmented from the wreckage of the 1940s.

Whether it was by providing a vessel for compositional anxieties, or acting a vehicle for nationalist expression, Shakespeare has continually been cast simultaneously in the roles of the most abstract and specific of playwrights. Performing Shakespeare carries with it a formidable weight of tradition, but it is through the continual reinvention of this tradition that Shakespeare is at his most vital. He continues to find new political and spiritual guises across the world today — as in, for example, Thomas Adès’s opera The Tempest. For as long as Shakespeare continues to be the canvas upon which musicians, actors, artists, and poets can inscribe their passions and anxieties, thank goodness for over-rated Shakespeare.

2. A watercolour sketch by Knut Ström for Romeo and Juliet at the Lorensberg (Stockholm), 1922.

Leah Broad is a DPhil at the University of Oxford. As the founder and editor of The Oxford Culture Review she writes extensively on the arts, and was shortlisted for the Observer/Anthony Burgess Prize for Arts Journalism 2016. She is currently authoring a radio programme on theatre and sound for Resonance FM, and co-leads the university’s Nordic Research Network.  More of her work can be found on her website. 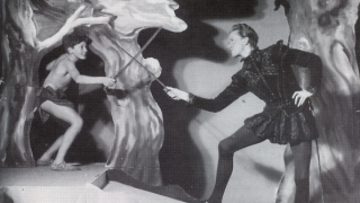