The Lexicon of Greek Personal Names has collected just thirty-two examples of the name Sophia so far: it belongs to the rather small class of names formed from abstract nouns (sophia is Greek for wisdom), which turns out to include a string of rare names hitherto unknown to me: Aisthesis (Perception), Apate (Deceit), Apistia (Mistrust), to take just three beginning with A.  Since these, like almost all abstract nouns in Greek, are grammatically feminine, the names are borne by women.  Scholars no longer believe in hermetically sealed classes of ‘slave names’ and ‘courtesan names’, but most bearers of these abstract nouns used as names look to be of low status: the tyrant Dionysius I of Syracuse (late 5th c. BCE), however, optimistically named his daughters Virtue (Arete) and Modesty (Sophrosyne).  The first Sophias can only be vaguely dated; there are certainly a few before the common era, perhaps beginning in the 4th c BCE.  They become a little more frequent in the common era, and enjoy a modest boom in Macedonia in the 5th -6th c. CE; the Lexicon comes to a halt, exhausted, at 600 CE, so the picture of Sophia’s place in popular naming from then on is not readily traceable.

There is no Saint Sophie.  The great basilica of Hagia Sophia in Istanbul is dedicated to The Divine Wisdom (expressed, according to different theological views, in either the second or third person of the Trinity).  It was perhaps in tribute to the basilica that the niece of Justinian’s consort Theodora was named Sophia; she married his successor Justin II and exercised considerable power during his bouts of insanity.  Through her, the name became endemic among Byzantine princesses, and thence in turn spread among many princely and royal families of Europe.  This was apparently the route that brought the name to England: James I’s youngest daughter lived only for a day but ‘was christened Sophia after her maternal grandmother Sophia, wife of Frederick II of Denmark’ (E.G. Withycombe, The Oxford Dictionary of Christian Names).  Such a route is unusual, one may note, since most Greek names arrive either, directly or indirectly, through classical literature, or via a saint.  Its prevalence among German royal families brought it great popularity in the Hanoverian England of the 18th c.  (note e.g. Sophia Western in Fielding’s Tom Jones; the picture shows Lady Cunliffe dressed as her.)  But its foreign origins had presumably been forgotten by Admiral Croft in Persuasion (himself married to a Sophie) when he wished that ‘young ladies had not such a number of fine names. I should never be out, if they were all Sophys or something of that sort.’  (Is the iconic significance of Sophie in the naval novels of Patrick O’ Brien, an enthusiast for Austen, a nod to Admiral Croft?)  In its Greek form the name went out of fashion in this country in the later 19th c. but, as we all know, as Sophy or Sophie came storming back in the 20th. 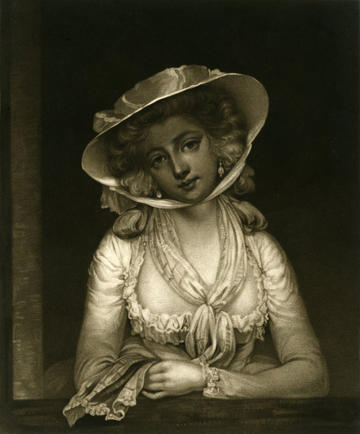