Stephanos was a fairly common name throughout the Greek world from the 5th c. BCE onwards; a son of the historian Thucydides is an early bearer.  The published volumes of LGPN have 566 instances, 117 from Athens alone. (But Athens has 1103 Dionysioi!)  Female derivatives are surprisingly rare: just seven instances of Stephane, three Stephanias.  A stephanos is a crown: not a king’s crown (they wore diadems), but a crown or garland as worn by ordinary Greek men on auspicious occasions: as victors in games, at banquets, in many religious contexts. ‘Very probably the first Stephanos was so called by an exulting family whose father had returned [from the games] with the parsley, or pine-leaf, crown upon his brow’, wrote C.M. Yonge.  It was a name of good omen, therefore. But not a distinguished name: the only Stephanos to earn an entry in the Oxford Classical Dictionary is a grammarian who compiled an encyclopaedia of Greek place names in the 6th c CE in Byzantium, a work indispensable to scholars but not in itself very highly regarded.

A good proportion of those 566 Stephanoi date to well on in the common era.  A decisive moment in the name’s history was when, in the words of Yonge again, it ‘came to that Hellenist deacon who first of all achieved the greatest of all the victories, and won the crown’.  Yonge did not need to explain to her readers, in 1863, her allusion to the Stephanos who was stoned in Jerusalem c. 35 CE for denouncing his hearers’ rejection of Christ, and so became the ‘protomartyr’ of the Christian church (Acts 6-7). An astonishing 198 early texts and artefacts mentioning this Stephanos are listed in the Oxford Cult of Saints database: the new popularity of the name in the common era reflects the protomartyr’s prestige, in both halves of the Roman empire.  (An obvious question which for the moment I cannot answer: did persons named Stefanus begin to swarm in the Latin West?)  In 415 CE the priest Lucian supposedly discovered his tomb at Kfar Gamla west of Jerusalem; c. 418 relics arrived at Uzalis in central North Africa; Augustine  in the City of God (22.8) has a long list of miracles performed in North Africa by the martyr through relics and in other ways  . . .  The forthcoming volume VI of LGPN, roughly covering the Roman provinces of Syria, Palaestina, Arabia, and areas further East, will contribute 326 more Stephanoi, the vast majority of them no doubt paying tribute directly or indirectly to the protomartyr.

A saint as popular as this was sure to spread his name throughout Europe. In this country it first appeared as a non-clerical name soon after the Norman conquest, and survived a king of indifferent repute. A more successful monarch had been Szent István király, King Saint Stephen, of Hungary (975-1038).  In England and Holland Stephen morphed into Steven (in pronunciation always, and often in spelling) through the regular shift of an [f] between vowels into [v]: cf. loaf, loaves, leaf, leaves, and so on.   A competent person, not I, could use other local forms, such as Spanish Estevan, French Etienne (Fouquet’s picture, on the right here, shows Etienne Chevalier with his patron saint) to illustrate other principles of linguistic change, and explain why (e.g) German Stephan retains the -a-  which in English and other languages has changed to -e-.  Surnames deriving from it include not just the obvious Stevens and Stevenson but Stinson, Stim(p)son, Stenson.  I would like to know what fixed in its familiar position the ‘Feast of Stephen’ of the carol, in the footsteps of which this blog belatedly treads; but Covid keeps me from the books I would need to consult. 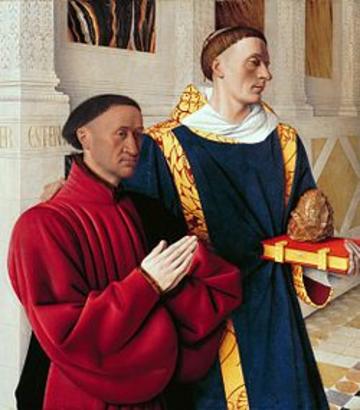