“I arrived at the University of Oxford as a British Academy International Newton Fellow at the Faculty of History and attached to Pembroke College in 2018. My college mentor Adrian Gregory introduced me to the poet and professor of English Literature Kate McLoughlin during my first month in Oxford. This turned out to be a match made in heaven.”

Dr Suzan Meryem Rosita Kalayci works on silence and silences with a particular interest in the history of the Armenian genocide. Her first encounter with TORCH was through our New Networks funding scheme, which funds up to three new interdisciplinary research networks a term. In the last eight years, it has provided key seed funding to 54 networks.

Together with Professor Kate McLoughlin and psychologist Dr Willem Kuyken, Dr Kalayci founded the Silence Hub (SH). Grown from a project called “Into Silence”, a series of silent performances in an array of mediums, the Silence Hub is an inter-disciplinary and public-facing network enabling those interested in silence to come together to share ideas and experience the power of soundlessness. 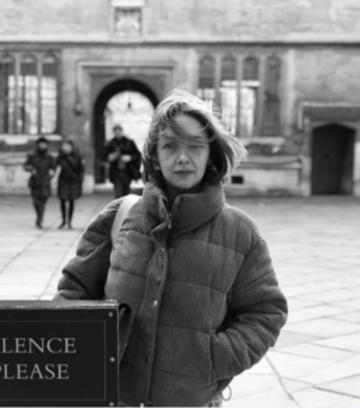 Dr Kalayci is clear about the benefits of building this network through TORCH: “As an early career researcher supported by TORCH, I learned a lot. With cultural programming, it is all in the small details. And the TORCH team has been fantastic guiding me through all the different processes and how-to-dos (and how-to-not-dos!). Plus, the public profile you get as a researcher is great: I have been contacted by literary magazines and journalists (asking for interviews), incoming graduate students (asking for supervision), interested researchers (asking for collaborations)... you name it!”

Now, Dr Kalayci is completing a book entitled Reading Silences: Essays on Women, Memory and War in 20th Century Turkey to be published with De Gruyter later this year.

As part of her work to broaden research on the Armenian Genocide, Dr Kalayci also applied for further TORCH Network funding, working with Professor Theo Maarten van Lint to create the Oxford Network for Armenian Genocide Research. As one of the first of the 20th century’s many genocides, the Armenian genocide provides a unique way into understanding the connective histories of state-sponsored human rights abuses in recent history. A central aim of the network is to make the Armenian genocide part of global conversations about human rights, witness and genocide prevention.

Most recently, the network held an enlightening conversation on Women, Storytelling, Silence, and War, which focused on the work of the International Armenian Literary Alliance and the role storytelling can play in imagining futures after war. Dr Kalayci has now brought together these two strands of her research to inform Syria and Silence, a project funded by TORCH’s Humanities Cultural Programme. HCP supports research-fuelled cultural activity, with a focus on widening engagement. The Syria and Silence project includes a vibrant (and often noisy!) range of activity involving the public in Syrian literature, including a pop-up library, a writing competition, and talks from Syrian writers of three different generations.

Dr Kalayci believes that her experiences with TORCH have helped her to build a career path she finds fulfilling:

"I am continuing my work as a historian, and have just been awarded a British Academy Postdoctoral Fellowship in History to write a new book, but I am also very excited to continue my spiritual work as St Hilda’s College Chaplain. To be an early career researcher today is challenging because most career paths are not linear anymore, but it gives us the chance to build our academic careers from different angles. TORCH definitely helped me with that.”

If you would like to support TORCH, including our work with researchers: