The Future of Ruins Past: Syria and Italy

This post was originally published at the Voltaire Foundation blog.

At the beginning of his 1791 Les Ruines, Constantin-François de Volney describes himself sitting amidst the ruins of Palmyra, on the edge of the Syrian desert. As his gaze shifts back and forth between the ancient monuments and the open horizon, he sinks into a profound reverie. It is the beginning of a long meditation on the principles that govern the rise and fall of civilizations.

A thriving cosmopolitan city in which the Persian and Greco-Roman worlds merged in complex ways, Palmyra was at its height between the first and second centuries AD. Its ruins, a destination for countless European travellers from the seventeenth century onward, bore witness to its greatness. Volney, like many others before him, was fascinated and at the same time dismayed by the sight. For him the ruins of Palmyra evoked not only the glorious past of an ancient Empire, but also a possible future for the great Western civilizations. They echoed the fragility itself of human society, and their shattered architecture was the material embodiment of the incessant cycles of history. By observing the rubble of the past, visitors were also stimulated to reflect on the causes that led a people to ruination. The knowledge of ruins past – for Volney – could help nations avert the eventual collapse of civilization.

The ruins of Palmyra are today under attack. As the ancient city has become a battlefield in the war between the Syrian regime and ISIS, we have seen its architectural heritage disappear – razed to the ground with explosives. The latest to fall, after the temples of Baalshamin and of Bel, was the 2000-year-old Arch of Triumph. The eighteenth-century etcher Giovanni Battista Piranesi, whose depictions of ruined landscapes are still so eloquent, was convinced that ruins had a voice and that they would continue to speak to our imaginations over the centuries. The ruins of Palmyra are powerful, stirring symbols and the fighters of ISIS must fear their collective voice if they are now trying to silence it once and for all. There is a sense of both disbelief and horror that seizes us at the thought of a piece of our collective history being ruthlessly destroyed.

In my book Ruins past: modernity in Italy, 1744-1836 I discuss the layered symbolism of ruins in Italy during its transition to modernity between the eighteenth and nineteenth centuries. I explore how the multiple meanings assumed by ruins are inextricable from the way we think about history, the relationship between past, present, and future, and categories such as progress and change. Ruins are never neutral symbols. If their destruction is an act of war, it is one aimed at rewriting history.

As George Orwell suggested, far more terrible than the power that desires to control the future is one that attempts to dominate the past as well. (1)  By erasing ruins, historical memory is destroyed. There is no more effective way of delegitimizing the present in order to lay the ground for a new regime and its new historical narrative. While the preservation (and reinvention) of its ancient ruins was both a poetic and a political act in Italy during the eighteenth and nineteenth centuries, in Syria today it is an imperative of salvation.

There is some hope on the horizon. In October 2015, a group of activists started #NEWPALMYRA, an online archive of 3-D models that reproduce Palmyra’s monuments with the aim of “rebuilding” the city. The Oxford Institute of Digital Archaeology has also launched the Million Image Database project, whose goal is to construct a 3-D photographic record of objects from endangered sites across the Middle East and North Africa, including Palmyra. To save the ruins of the past is an act of resistance crucial to saving the future.

1. Temple of Baalshamin, Palmyra, before its destruction. Bernard Gagnon (Own work) [GFDL (http://www.gnu.org/copyleft/fdl.html) or CC BY-SA 3.0 (http://creativecommons.org/licenses/by-sa/3.0)%5D, via Wikimedia Commons. 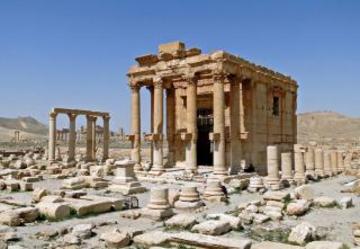