At the TORCH conference in Oxford, January 2020, I presented my work in-progress about the relations between contemporary art practices and the urban context of Athens, Greece. Immediately after the conference, I continued my fieldwork while, halfway through, the corona-crisis came to alter its course. The following is an account of that.

Clearly, the covid-19 crisis triggered the change of many routines in the lives of people, and just as many of the routines, perhaps, in the lives of ‘stuff’. Art spaces in the city of Athens, Greece, that animate their presence regularly with openings, and with people attending at other moments, were to remain closed due to lockdown restrictions. 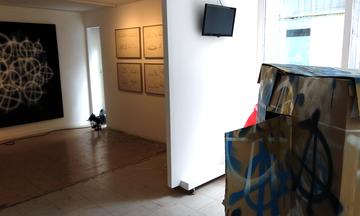 Art installation at the gallery space in Athens. Photographed by the author.

In an attempt to solve issues brought up by the lockdown – internet connectivity; a solid desk to work at – I managed to strike a deal with a neighbouring art gallery: there was ample space, and I could sit and work at one of the desks that were around. It was mid-April, and barely any car was passing, where usually the street would never be empty in this centrally located neighbourhood. As for the pedestrians, only an occasional passer-by would halt for a moment to look at the space.

Sitting at a table in this space, I would do Zoom calls and work on online material. Meanwhile, the owner of the gallery was doing administrative tasks at another desk. While working, my eyes would rest on a large cardboard installation, spray-painted from the outside, and with a small opening that would allow someone in. During all this time, though, nobody went in except for the gallery owner when he decided at some point to show me the works.

One by one, he switched on tv screens and spotlights directed at the works, and then tried to make the video run on the screen that was placed within the cardboard box. I started looking at the various items in the space, and at the videos presented on the screens. He would tell me stories about the works, the artist, and details about the things I saw. After some time, we each sat down, had a coffee, and continued our talks; about the prices of the works on the catalogue and the negotiations with collectors he would do. Meanwhile, the sounds from the videos still filled the space. Not much later, though, we called it a day, and as he switched off the lights and the screens, the space turned dim again like it had been for most of the time I was around.

The exceptional time of the lockdown and the ensuing altered modes of physical circulation, seemed to affect ‘art’ as well, and allowed for a peek into its coming into being as a conceptual category in its varied appearances – and as a system around which all kinds of meaning-making takes place.

The artworks that were carefully installed across the space seemed to take on an ambivalent position during this period: there, yet not there. Some of the purposes the gallery space used to serve seemed suspended, while other purposes were added: the library or café where I would sit and work had now become the art gallery. Under those conditions, particular new relations were forged, while others simply continued, and others were reinforced.

But what these conditions revealed even more, is the porousness of art itself as a category: even though the cardboard box did not move in the space during all that time, its meaning as an artwork became less fixed as the spotlights and monitors were off, the conversations shifted elsewhere and the sounds in the space were those of online calls related to other business.

The administrative work of the space continued, however, and the bills kept coming in. Even if running the space had never been something its owner had taken for granted in the unfavourable Greek juridical landscape, its continuity was at stake even more now, as selling works was halted, and other activities, such as the arrival of foreign artist-residents, were stalled. Art, it became clear to me, is an intricate thing.

Herbert Ploegman is a lecturer and a PhD researcher at the department of Social and Cultural Anthropology at the Vrije Universiteit Amsterdam, and he is working on his PhD thesis on the developing contemporary art scene in Athens, Greece. 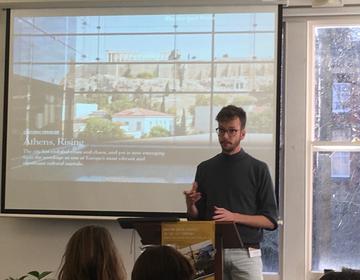 Herbert Ploegman (Vrije Universiteit Amsterdam) Discerning an ‘Anthropology of Art’ between Blocks of ‘Architecture’ and ‘Artworks on Show’ in Athens, Greece