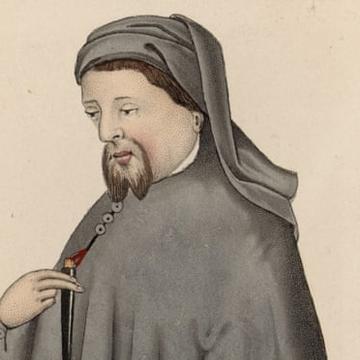 He may be revered as the father of English literature, but Geoffrey Chaucer’s first appearance in recorded history is as a teenager wearing leggings so tight one churchman blamed the fashion for bringing back the plague.

Scholars have known since at least 1966 that Elizabeth de Burgh, who employed the adolescent Chaucer, bought him a “paltok” for four shillings at Easter 1357, spending a further three shillings for black and red hose, and a pair of shoes. But Chaucer’s first female biographer, the Oxford academic Marion Turner, suggests that no previous biographer had ever considered what a paltok might be. Delving into contemporary chronicles, she found commentators at the time describing paltoks – a kind of tunic – as “extremely short garments ... which failed to conceal their arses or their private parts”.

“No one had ever thought about what they were before [but] I found these were completely scandalous items,” said Turner, who is associate professor of English at Jesus College, Oxford. “The paltok was skimpy and scanty, and underneath that there are these long leggings, or tights. Contemporary sources say they emphasised the genitals, as they were laced up very tightly over the penis and bottom, so you could see everything.”

The theologian John of Reading, Turner writes in Chaucer: A European Life, which has just been published by Princeton University Press, “explicitly blamed this kind of clothing for causing the plague”, and “feared a judgment from God for such outrageous sartorial choices”.

“When people think about Chaucer they think about a middle-aged man in a Southwark pub or writing The Canterbury Tales, the father of English literature, this patriarchal figure who’s at the head of the canon,” said Turner. “But the first time we see him in the documentary records he steps off the page as this teenage fashion plate being presented to the world by a woman. For Elizabeth de Burgh, it’s part of her prestige to have these beautifully dressed young men hanging around the household. They’re like her display objects in the living room looking glamorous.”

Turner said that Chaucer would go on to be “very interested in thinking about subjectivity, subject and objects, people who are controlled by other people”, writing about how clothing can also be used to control people. In The Manciple’s Tale, the servant figure is represented by a bird, who has his feathers ripped out by his master after displeasing him; in The Clerk’s Tale, a peasant girl is reclothed in rich garments by her fiance Walter, garments which are later taken away when he repudiates her.

Turner’s book is the first full biography of Chaucer for a generation, and the first written by a woman. “There’s been a long tradition of almost toxically masculine biographies. I would not say that is true of all biographies, and not of more recent ones, but there are lots which have really focused on a chummy masculine response to Chaucer,” the academic said.

John Dryden, for example, wrote that when he read Chaucer he found he had a soul “congenial” to the poet. “Lots had this ‘He’s my friend, the kind of guy I could go to the pub with’ attitude to Chaucer,” she added, citing one biographer who describes an interpretation suggesting the poet may have committed rape as a “cheerful” view: “He wants to believe in Chaucer’s sexual success.”

But Turner says she has taken a different approach, for example by focusing more on Chaucer’s daughter: “I don’t know if that’s because I’m a woman or because I’m writing in the 21st century.” Her biography digs into the details of the London nunnery where Chaucer’s daughter Elizabeth lived, St Helen’s Bishopsgate, finding that far from being a quiet and refined space, an inspection urged that nuns should refrain from “daunsyng and revelyng” except at Christmas and other “honest tymys of recreacyone”, and complained that “there is moche coming in and owte unlefulle tymys”. The nunnery was a five-minute walk from where Chaucer was living at the time, and “it would be extraordinary if he didn’t visit her there,” said Turner.

“One striking thing about the women Chaucer knew was that they were very independent. His wife always had a job, always had her own salary … she seems to have lived independently from him for quite a lot of their married life,” she said. “People can write sympathetically about women and it doesn’t mean they treat them sympathetically in life, but in Chaucer’s poetry he is notably extremely sympathetic to women.”

In Troilus and Criseyde, his version of Criseyde is “much more sympathetic” than in his sources. “He makes us see why she might betray her lover, how she’s being pimped by her male relatives.” And his most famous female creation, the Wife of Bath, is treated differently to Chaucer’s other pilgrims, given a life outside her prologue and tale. “She becomes an authority figure, which is great, because one of the things she talks about in her prologue is how men wrote all the stories and history is biased against women, and Chaucer makes her into an authority figure with gravitas,” said Turner. “Of course she’s not a real woman, she’s Chaucer in drag, but he’s still emphasising the importance of recognising the bias of the literary canon.”

• Chaucer: A European Life by Marion Turner is published by Princeton University Press on 17 April (2019).