Bio & Abstract:
This blog post is based on a paper of the same name given at a QSN Research Lunch. It explores manuscript illustrations that depict ‘sodomy’, and how we might consider gaze and entanglement as mechanisms of definition in visual sources.

Alice Raw is a DPhil candidate and Lecturer in History at Corpus Christi College, Oxford. The title of her thesis is ‘Gender and Sexual Discourse in Late Medieval England’, the focus of which is Middle English texts that explore pleasure and consent. She lectures on gender, sexuality, and queer methodologies in Medieval Europe.

Anyone who performs the fornication of the lips penance for four years if it is their first time but if it is usually their custom seven. [trans. T. O’Donnell].

O’Donnell convincingly argues for reading these ‘bel’ or ‘lips’ as vaginal, but recognises that such references are often short and oblique, largely because medieval theologians and moralists were far more concerned about semen being spilled outside of the context of heterosexual, penetrative, vaginal sex (within marriage). This relegates any sex act where a penis is not directly involved to a secondary concern, and makes such acts more difficult to access for historians of sexuality.

So much for words. I want to turn instead to manuscript depictions of sexuality – their boldness, but also their limits in their understanding of ‘sodomy’. Mikhail Bakhtin famously found that ‘in medieval art, a strict line is drawn between the pious and the grotesque’. In his ground-breaking Image on the Edge, Michael Camille refutes the binary between the sacred and the profane expounded by Bakhtin, and carefully deconstructs motifs where the religious ideas at the centre of a manuscript are dependent on the often obscene margins for their ‘continued existence’. Simply put, the text and marginalia of manuscripts inform each other’s meaning. In the Pabenham–Clifford Hours, for example, the glaring gaze of a gryllus (a face with legs) is met by an equally fierce female head (fig. 1). Camille directs our attention to the text immediately above the image: ‘Turbatus est a furore oculus meus’ [My eye is disturbed in anger]. 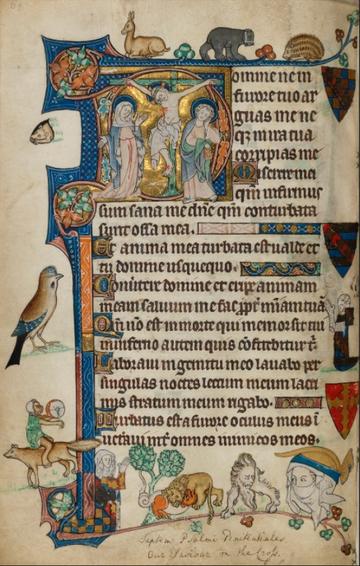 Camille further explores the potential for sexual-syllabic word play; a well-known medieval joke asks what the dirtiest word in the Psalter is. The answer is conculcavit, combining con (cunt), cul (arse), and vit (prick). In the case of the Pabenham–Clifford Hours, Camille sees the word conturbata as similarly inspiring the ‘odd, drooping but phallic turban worn by the female’. This is a stretch in and of itself. In reaching for a sexual image suggested by the word con and the fabric folds of the turban, Camille finds this to be most obviously phallic rather than yonic. Even if we leave this aside, he is further only willing to make a sexual connection where a phallus might be involved.
This is clearest in Camille’s discussion of the prayer book he calls Marguerite’s Hours for its supposed female owner (fig. 2). In the margin, a nude man and woman embrace, the man’s head between the woman’s legs. His face and arm are directed towards her genitalia, while a third figure, a huge bird, penetrates the man’s anus with its beak. This, says Camille, may look like cunnilingus, but actually the man is ‘diving back into the womb’. He finds this image ‘exceptionally explicit’, but only because the man’s anus is ‘threatened’. Only one half of the image can have a sexual script – and it is not the half that includes a female body. Camille is thus repeatedly willing to see ‘dangerous penetrations’ in the proximity, however slight, of male anuses and various plant tendrils, beaks, and spears, all stabilising as ‘sodomy’. Camille does recognise oral imagery, but again, only when it is phallic. Indeed, when men eat vines, they are ‘spiralling orgies of autophagia’. Depictions of cunnilingus – another sodomy – cannot be accepted on the same terms and must instead stabilise as a metaphor for pregnancy. There is, then, a major disconnect when it comes to interpreting sex acts that centre women’s bodies. 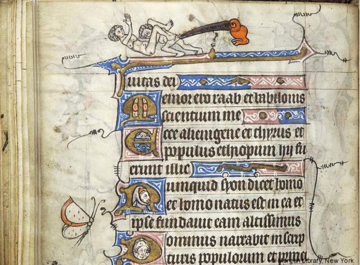 Or – they are disappeared entirely. An image that accompanies a Treatise on the Vices (fig. 5) shows cannibals feasting on flesh beyond the safety of the walls of an Italian city. Camille recognises that one cannibal ‘munches on genitalia’, but leaves it at that. I think there is much more to be said here.

It is important first to recognize that the cannibals are depicted as ‘wild people’. These have a complicated relationship with gender in the medieval imagination. Let us look at a few examples of ‘wild people’. In the Old English Wonders of the East (fig. 3), the below image is accompanied by a description of the ‘huntress’: ‘Ymb þa stowe beoð wif akenned’ [around those places women are born]. Dana Oswald has discussed the subtle ways in which the artist of this tiny image has sought to complicate the gender of the figure, who would initially scan as masculine to a medieval eye. The beard, unkempt hair, and partial nakedness is however different to male half-naked figures in the same manuscript, whose muscles are drawn in fine, dark lines. Here, the detail lines are barely visible, drawn in white. The musculature follows the same patterns, but with the addition of breasts. 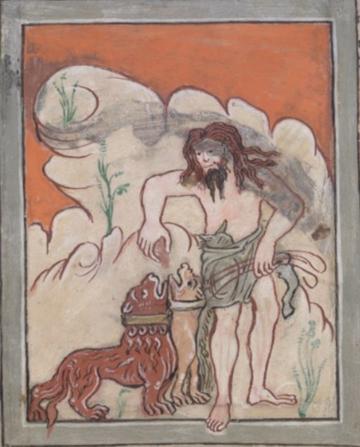 Breasts, beards, muscles, and genitals: these are the primary signifiers for gender in depictions of ‘wild people’. Actions provide further points of reference, including child-rearing, breastfeeding, and hunting. 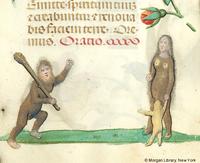 With these insights in mind, what seems reasonable to say in relation to our manuscript (fig .5) is that this particular artist uses breasts and beards as indicators of genders, but this may be complicated by hair colour and texture. These complications are metastatic in one image in particular. Here, a breasted beardless figure doubly consumes another’s body, performing oral sex on a breasted corpse as a bearded figure watches intently. 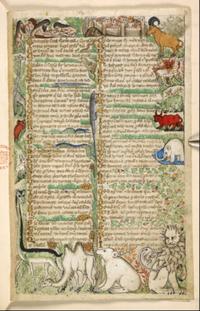 I want to work through the stages in this image and think about how our gaze is directed in order to create meaning. A flash of red – flesh, or a tongue? – is the brightest colour on the page and forms the focal point. Our eyes are immediately drawn to the central image: a sodomy being performed. 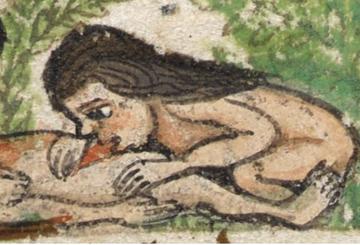 Next, we see the breasted, beardless figure performing what now reads as a same-sex act.
Zoom out again, and we register that the breasted, beardless figure on whom the act is being performed is bloody and expressionless. We might now add to the litany of sins: necrophilia.
By this point, the medieval viewer has enough information to understand that what initially might appear as a titillating instance of oral sex has been squarely placed within the context of multiple other sodomies, each informing the other. We might then notice the bearded voyeur, whose gaze mirrors what our own has been.

These three figures are not alone: beside them, a further two figures feast on a detached leg, making explicit that our central act can also be read as cannibalism. Note that they too are eroticised via their locked gaze, widely recognised as a signifier of sexual interest in European medieval society.

Widening our focus just once more, we see the city, which we might presume to be Genoa, where the manuscript’s artist and patron family, the Cocharelli, lived. Our figures are placed firmly outside of the city walls, which confirms them as ‘wild people’, physically and morally beyond the norms and bounds of Christendom.
So why does this image matter? It hardly requires pointing out that medieval people did not actually stay inside their cities for fear of the cannibal ‘wild people’ waiting for them outside. Nor is it enough to say that medieval people thought all of the individual elements of the image were bad. Rather, I think it is informative to think about this image in terms of entanglement. As a theoretical frame, entanglement has been used by historians to discuss how unstable identities are mutually constructing, and engaged in constant revision. In the case of the identities Jew/Christian, Dorothy Kim has built on ideas of ‘contamination’ – identities that are not simply concurrent, but overlapping and blurred – to consider how co-dependency of categories in material texts problematises binaries, and conceptualize how Jews can be marked by race in relation to the body, via what she calls ‘racial prosthesis’.

This is not a static image of ‘unnaturalness’, but a moment of definition: a sex act being performed on a woman; alongside a woman performing the act; alongside necrophilia; alongside a male voyeur; alongside cannibalism. Each of these mutually, and progressively, defines the others as unnatural. The viewer is thus drawn towards viewing the sodomy depicted to be as sinful as cannibalism. In a strange symmetry with Camille, sodomy depends on other unnatural acts for its ‘continued existence’. 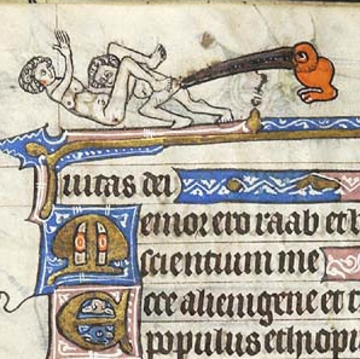