Was the Universal Declaration of Human Rights merely an imperialistic ploy? Who was responsible for enshrining gender equality in the Charter of the United Nations, the first international instrument to recognize women’s rights? In what ways did Indian constitution-makers seek to balance democratic principles against a need for technical competence? These are just three examples of research questions raised at the Negotiated Texts Network seminar on Monday, 11 June 2018. The Network was a guest of the Department of Informatics at King’s College London. The opening panel was chaired by Dr Nicholas Cole, the Director of the Quill Project. He and his fellow panellists highlighted some of the challenges and opportunities posed by negotiated texts, while a second panel, chaired by Dr Alfie Abdul-Rahman, showcased how natural language processing and visualization might be employed to open up negotiated texts for research, education, and public engagement.

The first guest speaker was Elise Luhr Dietrichson, a Research Associate at the Centre for International Studies and Diplomacy at SOAS, University of London. Her current research project, recently presented at UN Headquarters in New York, examines the Latin American contribution to the UN Charter. In particular, she seeks to challenge the narrative that gender equality was a Northern contribution to the Charter by highlighting historical records which demonstrate that the most progressive influence at the UN Conference on International Organization in San Francisco in 1945 came from the Global South—in particular, from the Latin American women delegates. On the other hand, delegates from the United Kingdom and the United States—including Virginia Gildersleeve, to whose efforts the inclusion of women’s rights in the Charter is sometimes erroneously attributed—were skeptical, characterizing the Latin American interventions as ‘spectacular’ and ‘vulgar’. The paper drew attention to the fact that, without understanding and studying in detail the process of negotiation, there is a danger of coming to simplistic conclusions based on the gender and nationality of the participants.

The second presentation continued the United Nations theme by highlighting some of the current debates about the drafting and relevance of the Universal Declaration on Human Rights. Dr Jan Lemnitzer, an Associate Professor at the University of Southern Denmark, postulated that a model of the Universal Declaration, similar to that already prepared by Quill of the Federal Convention of 1787 in the United States, could help scholars assess the relative influence of the main drafters and analyse (for example) the arguments of delegations that did not accept the final text. This work would be particularly relevant in tackling questions surrounding the ongoing relevance of the Declaration. Moreover, a model would be valuable tool for teaching and public engagement.

The final paper given in the course of the first panel challenged an idealistic interpretation of the work of the Indian Constituent Assembly which fails to take account of the fact that the final text was negotiated by a large group of delegates rather than written by one or two individuals. Udit Bhatia, of the University of Oxford, demonstrated that constitutional debates about competency to rule continued beyond the colonial era. By highlighting some of the different options that were available to drafters, he was able to draw conclusions about their motivations and priorities. It became clear that the Indian Constitution could form the basis of an interesting comparative study as delegates at the Constituent Assembly drew from a range of other constitutions in their deliberations.

The second panel began with a presentation by Dr Omer Gunes, a Junior Reseach Fellow at Pembroke College, Oxford, and a full-time member of the Quill Project. He outlined the potential contribution of natural language processing, a subfield of artificial intelligence, to searching and interpreting negotiated texts. He explained some of the challenges inherent in developing algorithms to understand human language and convert it into structured text, taking the audience step by step through the process. The potential of this method is immense compared to more traditional keyword searches: while there is considerable investment of time required at the outset, and while a large dataset is required, the reward is that deep learning is automatic and keywords do not need to be entered manually.

The second and third presentations both looked at visualization. Dr Rita Borgo is a Senior Lecturer in the Department of Informatics at King’s and is currently head of the Human Centred Computing Research Group there. Her research interests lie in the areas of information visualization and visual analytics, with particular focus on the role of human factors in visualization. Her presentation helped the audience understand how a visual analyst might break down and interpret a research question or problem so as to produce a particular visualization. By using examples from the first panel’s presentations, she demonstrated that that visualizations are rooted in the data and develop in function of the problem set by the researcher. It is therefore essential to have correctly formulate the question at the outset. The final presenter, Dr Cagatay Turkay, from City, University of London, showcased some of the different kinds of visualization which could be developed, depending on the audience and objectives.

Following the formal sessions, the panellists and audience carried on the discussion over a substantial sandwich lunch. A number of new members joined the Network and opportunities to collaborate and conduct joint research continued to be discussed well into the evening. 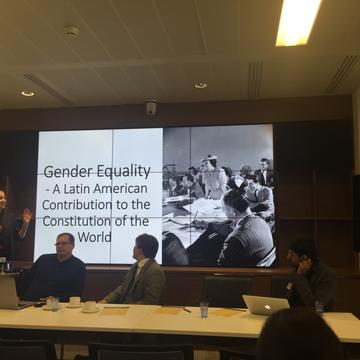