Winning Entries for SciPo Poetry Competition 'The Science of the Seas'

Below are the winning entries to the SciPo Poetry Competition 'Science of the Seas', which closed on the 30th July 2020.

2nd Place: Eveline Pye with the poem Mother of the Sea.

We also congratulate our Commended:

Dorothy Yamamoto with the poem Nautilus

Anoushka Havinden with the poem The Bathymetry of the Inner Sound

and Daniele Nunziata  with the poem Thalassa

Its life is short, but the shell it leaves—

the carapace of its body’s ventures—

lasts longer than any tree:

music of the dying oak but

when the huge eye of the moon

hung lower in the sky

with the accretions in their chambers,

Now let those shells be

memorials to the drowned, the lost,

to all who, searching for home,

Let their precision be

If you, human, had carried for all time

Leaden and the hapless grey of evenings

Perhaps you too (you, who stand and cackle)

Would fracture. We polymers have limits,

And ice-shelves fall thunderous as apples

On the hardened earth. Minute by minute,

The great pond leaks. I spend my time counting

Fishtails on my sides, moth hot and pressing

As the water drools out even, flapping

As the filter churns on thickly, pumping,

As the lilies lower gently, waiting.

The Bathymetry of the Inner Sound by Anoushka Havinden

‘The leadsman, working in darkness, must know the distance from his waist to the waterline. He reads the mark closest to his waist by feel (or in cold weather by touching the mark to his lips or tongue which are more sensitive than cold fingers).’

writing Bible verses on rocks
preaching at every port
in fog, in storms, in the dark.

Listens for the leadsman,
Letting the weight down
feeling for a leather, serge, calico flag

calling through the marks and the deeps,
considers the neap tides and knots in the stream
counting all that he can fathom

in the Nautilus whorl of the Sound.
By Red Point, on a chilled morning,
the weight drags across a muddy cave,

a pocket of nameless myth.
The sailors look down as if into the night sky
and the water is lit

They may root in the sea bed, branch, bud
spread like fireworks, to detach again and take flight
- ephyra, medusa, sometimes just multiplying for the hell of it

close to immortal – dying a thousand ways
living a thousand more, flickering in and out
as if signalling: ‘God is here’ in blue light.

Thalassa, the sea; its name in ancient and modern Greek,
flows through the generations who speak
the seafaring tongue, and those who arrange,
like pebble collectors on a beach,
scientific names of creatures and disease.

And so the designation passes in my blood,
from a fraction of my ancestors long quieted by death,
like an internal cultural flood,
washing through new letters of life;
but also depleting. It is half the name
of that deficiency,
thalassemia. The blood cells not quite right,
parched, gasping for oxygen-rich haemoglobin,
the second letter of H₂0 dropped off the end,
lost, drowning,
trying to find a shore, a tether, a mend.

Those ancient seafarers didn’t even know
Neptune and Uranus existed
as they sat pensive on the deck
and watched the colour of the crying sun
bleed silently into the waves
on the precipice of the merging domains
of the Sea-God and the Sky-God, meeting.
And the Sky-God’s daughter, born etymologically of foamy waves,
crept onto the multilingual island of my forebears
and, like all culture, she washed between:
from Mesopotamian Ishtar between the rivers,
to Phoenician Astarte, to Egyptian Hathor,
to Greek Aphrodite, to Roman Venus,
to something in our modern myths,
in the words of those changing-tongue navigators:

They who followed the Morning Star with their primitive telescopes,
carrying cargo of ever-flowing languages,
and observations of the natural world,
and genes – though they did not know the word –
bringing forward that recessive trait
for future inheritors
like me, a foreign-tongued child of the sea.

As the water rocks outside, so the blood sways within;
These two gauges of culture are the life-forces of which I must sing.

Mother of the Sea by Eveline Pye

For centuries, Japanese sea-farmers
plunged poles into shallow water,
tied on home-made nets,
harvested red seaweed for sushi
but after the war, the crops failed
and they called it gambler’s grass,
walked on legs like knobbled sticks,
died on the beaches.

The pollination of pure science:
a few lines in Nature magazine
on the life cycle of Porphyra, written
with no thought for the Japanese
led to artificial seeding
and soon sushi leaves were flapping
like russet butterflies
all along the hungry shoreline.

Each year, at cherry blossom time,
a crowd gathers on a windy hilltop
by the Ariake Sea:
Dr Drew’s academic gown
is draped over her Shinto shrine;
branches of sakaki, the holy tree,
are laid on the altar with offerings
of fish for the Mother of the Sea.
.

For those who sail, the science of the seas

is the art of gazing at stars – how to see them

by looking slightly away; and then how to open

one’s ears to the tales they tell of navigation,

of long homecomings after war and heartbreak.

The science of your ocean, Palinurus, is the craft

of sea-song and memory – of how, driven on by

the self’s changeable weathers, you rowed out

into the bay, staring back at the familiar domes

and parasol pines going up in smoke, ghosting.

Breakfast on board was brief and sweet, cheese, figs,

when the storm, towering overhead, took you

by surprise – a meltemi out of the north, out of

your sense of taste – of salt and wet and ice –

is a new kind of seeing while wave upon wave

is blinding you and the breath is being sucked

from your lungs by the three-day gale. The sea

copies itself, twice over, tiny and pitch-dark

in your eyes as you scan the black wall of water –

no moon, only a judder in the air, a fold in the night

where light is in hiding. Yes, in your mind you know

where to find them, the April rainers, Arcturus,

Orion, the Bears, the heavenly fireflies that spill

over the bare flesh of your arms, milk-white petals

smelling of distance, Hesperia. But you no longer

belong to yourself, there is still too much

you do not know: why the wave-tug on the shingle

hisses like the maϊstros gusting in an olive tree,

fishing for sea-lilies or the noctiluca silvering like stars. 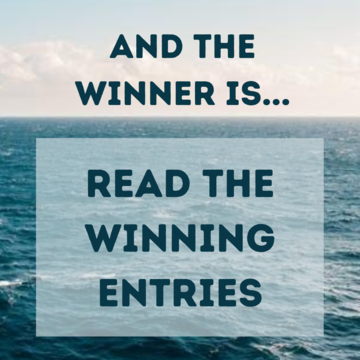