‘Women’s Spaces, Pleasure, and Desire in the Belle Époque’ Conference

A particularly insidious aspect of patriarchal systems is the persistence with which women are positioned as objects of desire, rather than as desiring subjects. It was therefore, both a great joy and an enlightening experience to participate in a conference which placed the subject of female desire front and centre, as researchers from a multitude of disciplines came together to discuss women’s spaces during the Belle Époque.

The lovely Lady Brodie Room at St. Hilda’s College, Oxford – with its elegant French windows and its garden-view – served as an ideal backdrop for a wealth of compelling papers about Belle Époque women who either found or fashioned environments within which they were free to pursue pleasure.

Charlotte Faucher (Manchester) spoke about the fascinating life of Marie d’Orliac, who established the cultural institute, the university of French letters, in London, in order to promote French bourgeois culture as desirable to British high society. In stark contrast to d’Orliac, who strove to shape convention, other Belle Époque women created spaces wherein conventional ways of life could be safely subverted: Giselle Bernard (Marburg) and Mara Gold (Oxford) discussed how lesbianism flourished in female-dominated environments across Western Europe, whereas Turkay Gasimova (HEC EUI) spoke of educational institutions in the South Caucasus, which allowed female Muslim intellectuals to pursue their desire for knowledge in spite of clerical opposition.

Yulia Shabarova (St Petersburg State University), Maria Golovteeva (St Andrews) and Apolline Malevez (Queen’s University Belfast) all explored a different aspect of the interplay between female agency and artists’ workspaces. Yulia Shabarova discussed the role of the female patron of the arts, focusing on the Talashkino estate in Russia, which became a notable art school and exhibition space during the Belle Époque under the direction of Princess Maria Tenisheva. Maria Golovteeva explored the workspaces of female artists, focusing on the studio of Theresa Feodorovna Ries, whose striking sculptures caused a sensation in Belle Époque Vienna. Meanwhile, Apolline Malevez located the agency of the artist’s model, discussing how Nel Duerinckx and Maria Sèthe influenced the portrayal of space in the art of their respective partners (Rik Wouters and Henry van de Velde).

These papers, which considered a wide variety of carefully managed indoor environments, were complemented by Aurelia Annat’s (Oxford) and Heidi Liedke’s (Queen Mary, University of London) investigations of female desire as it relates to the great outdoors. Aurelia Annat discussed fantasies about the Irish landscape in women’s writing of the Belle Époque, whereas Heidi Liedke elucidated the delight which Victorian lepidopterist Margaret Fountaine experienced after leaving her sheltered home in England to chase butterflies around the world.

Yet such accepting, or, at least, ambivalent attitudes towards women who pursued their desires were not universal. Sasha Rasmussen (Oxford) explained that whereas Russian fashion magazines supported women who ventured into public spaces wearing the audacious fashion of the jupe-culotte (skirt-trousers), French fashion magazines suggested that the conduct of such women was a threat to polite society. The idea that female liberty was threatening was reinforced in French art during this period, with Hannah Halliwell (Birmingham) highlighting how – even though the majority of morphine addicts during the Belle Époque were male – morphine addicts in French art were most frequently portrayed as young women who sought sensuous gratification.

At the 1900 Exposition Universelle in Paris, the exhibition’s viewers were encouraged to view female sexuality as an exotic spectacle, as Catherine Phipps (Oxford) explained in her paper about the exhibition’s exploitation of North African women. My own paper considered the perceived danger which female sexuality posed to the feminist movement, as feminist authors such as Kate Chopin, Olive Schreiner and Charlotte Perkins Gilman wrote about the heterosexual woman’s struggle to form romantic bonds with men, without subjecting herself to a form of bondage.

On my way back to Cambridge after the conference was over, I thought about all the incredible female artists and writers whose work I had first heard about thanks to the likewise incredible researchers who I had just heard speak. Thankfully, the barriers which limited the capacity of creative women to pursue their desires during the Belle Époque hold far less sway today, yet the work of trailblazing women who made the world a better place by overcoming these barriers remains largely overlooked. We need more research on the subject of female fulfilment and self-expression. As a result of the conference, I arrived back at Newnham College – which remains a woman’s college to this day – with renewed resolve, and a distinct sense of inspiration. For there is work to be done. 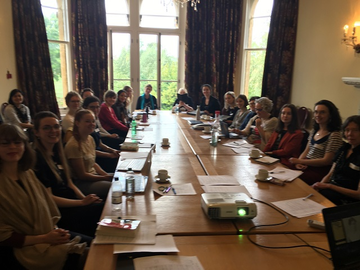