In his response to Anderson’s Imagined Communities, Homi Bhabha describes national time as characterised by the two dimensions of the “pedagogical” and the “performative”, where the pedagogical indicates the “a priori historical presence” of the nation and the performative stresses its “enunciatory ‘present’”. According to Bhabha, these two dimensions are suppressed together in nationalist narratives, where the organic coming together of past and present into one single destiny explains the nation as the “fulfillment of a ‘project’ stretching over centuries”. By contrast, anti-nationalist writings exploit the paradox of the two components of national time, showcasing its ambiguity and inconsistency in order to create an alternative narrative.

The paper I presented at the ‘Rethinking Modern Greek Studies’ conference aimed to present how the poetry of Yannis Ritsos manages to problematise the national imagining of modern Greek art as a mere continuation of its classical past through the complication of national time. I looked at Repetitions, Testimonies, Parentheses, focusing in particular on how classical tropes are thus used to reaffirm the alternative history of the present, bringing to the fore minorities and silenced voices of political groups. As I argue, the classical past holds an ambiguous position in Ritsos’ poetry: stressing on the paradoxes between past and present, Ritsos sees no continuity between myth and national history; but still regards classical myth as a way to subvert the present and illuminate marginalized voices. In this, Ritsos’ poetry can be understood as representing the time of myth as a marginal counter-space of resistance. As bell hook states, the margin can be considered a “space of radical openness”: the time of myth in Ritsos’ poetry is then situated in the marginal space between Bhabha’s pedagogical and performative time, resisting to the national treatment of the classics.

hook’s treatment of the margins and of writing from the margins is also fundamental in re-evaluating Ritsos’ poetry as operating an act of radical resistance in itself. This reading of Ritsos through hook’s lens is fundamental in addressing the questions proposed by the Oxford/Amsterdam Symposium: What makes forms of cultural production in contemporary Greece relevant for international audiences or paradigmatic for new social and artistic imaginaries in Europe and the Mediterranean? How can we make Modern Greek Studies more multicultural, pluridisciplinary, comparative, inclusive and less (pen)insular? How can we critique and expand our analyses to move beyond Modern Greek exceptionalism? My provisional answer is that Ritsos’ treatment of the margins in classical myth as a space of radical openness for his own poetry needs to provide us with a similar blueprint for the reading of his own poetry: the peninsularity of Modern Greece has to be considered not as exceptional and exclusive, but rather as offering a marginal space “which affirms and sustains our subjectivity, which gives us a new location from which to articulate our sense of the world” (hooks). Writing and reading from the margins is then fundamental in order to engage with classics in a politically, socially, and culturally engaged way: as Ritsos shows us, the space of the margins can indeed provide new avenues for a radical re-evaluation not only of the classics, but of Modern Greek literature as well.

Eleonora Colli is a graduate student at the University of Oxford reading for the MSt Greek and Latin Languages and Literature (A.Y. 2019/20). 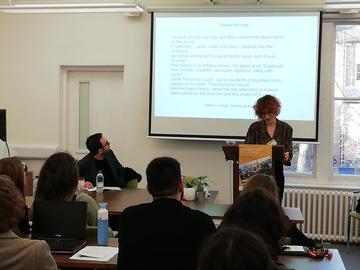