Celebrating 500 Years of Pregnancy and Birth

Royal College of Obstetricians and Gynaecologists 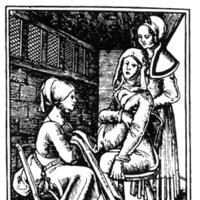 'Celebrating 500 Years of Pregnancy and Birth'

Partner Organisation:
The Royal College of Obstetricians and Gynaecologists

Giving birth without some kind of pain relief is a rarity in the twenty-first century, but we perhaps have the combined efforts of obstetrician James Young Simpson and Queen Victoria to thank for this. It wasn’t until the late 1840s that any kind of anaesthetic was used for childbirth, when Simpson began giving small doses of chloroform to women in labour. Apart from the fear that surrounded this new (and now, we know, likely carcinogenic) chemical, Simpson’s technique was opposed on religious grounds. According to many contemporary clergy members, the biblical passage stating ‘in sorrow shalt thou bring forth children’ was to be taken literally. If God had meant childbirth to be painless he would have made it so — using an anaesthetic was to directly contradict God’s will. It wasn’t until Queen Victoria used chloroform for her eighth birth in 1853 that anaesthetic became widely accepted, and public enthusiasm overwhelmed religious objection to the practice.

Valerie Worth’s project explored stories like these, staging an exhibition celebrating 500 years of changing perceptions about pregnancy. In collaboration with the Royal College of Obstetricians and Gynaecologists, and the De Partu research group on the history of childbirth, the Fellowship resulted in a six-month exhibition at the Royal College’s Library. The exhibition featured materials from the College’s own archives, contextualising them and investigating the controversies that surrounded many of these writings and ideas. To complement the exhibition, a conference and study day were held in London and Oxford respectively, bringing together practitioners, archivists, and academics to discuss the exhibition’s themes.

alerie’s collaboration with the Royal College has continued beyond the end of the Fellowship, and she has since participated in the Royal College’s consensus group to develop methods for improving gynaecological care in the UK.